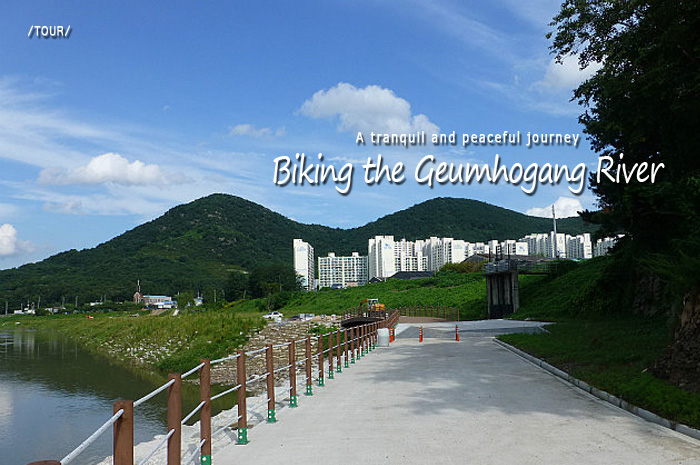 Biking the Geumhogang River
A tranquil and peaceful journey


Back home in Toronto I used to do lots of biking along the Lakeshore trail which ran for about 30kms. It also branched northwards along the Don and Humber Rivers providing an extensive river biking network. I've missed having these biking trails and was envious of other Korean cities such as Seoul which has a long biking trail along the Han River. 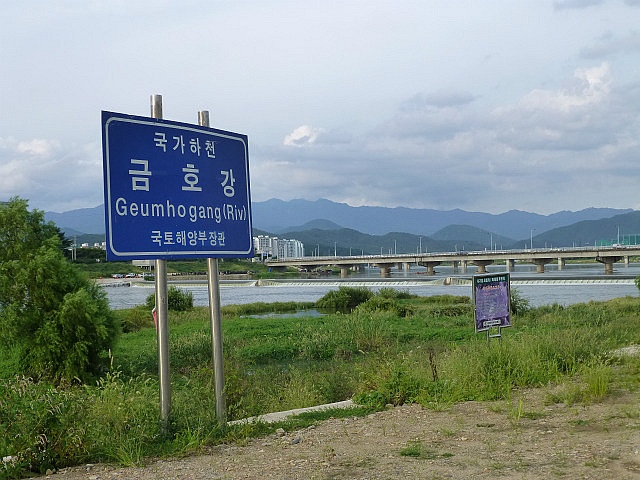 Daegu does have a downtown biking trail along the Sincheon River but I lived nowhere close enough to be able to access it. The new neighbourhood I've moved to brings me closer to the Geumhogang River. This river crosses the entire city of Daegu along the north and separates it from the northern suburb of Chilgok. It also connects to the downtown Sincheon River. 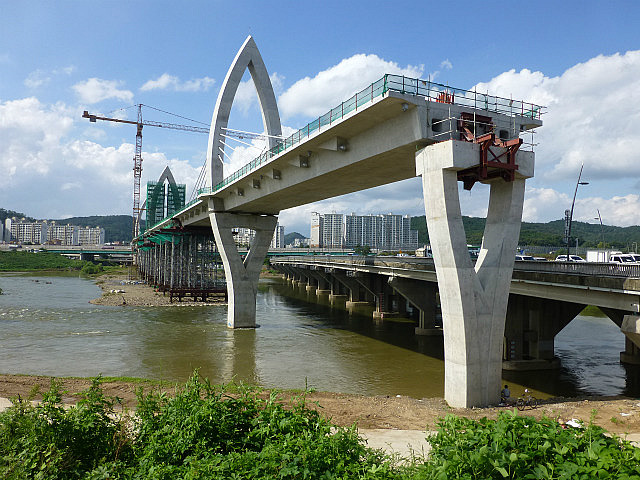 One of the joys of moving to this new neighbourhood is I now have easy access to the river biking trail which runs to many parts of the city. I live close to the Paldal Bridge crossing so have the choice of going east to downtown, or west further out into the suburbs. Normally I would go in one direction but for the purpose of this entry I did a big loop going both ways. 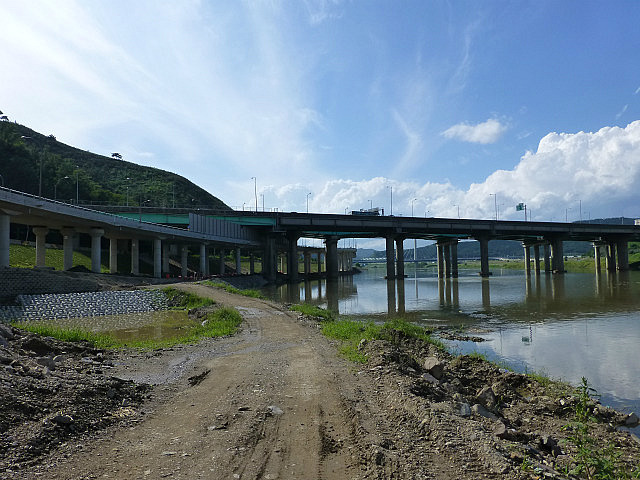 The path is mostly paved except for a small area west of the Paldal Bridge. However, the paving seems to be going up quite fast since my last visit and should be complete in the next couple of weeks. 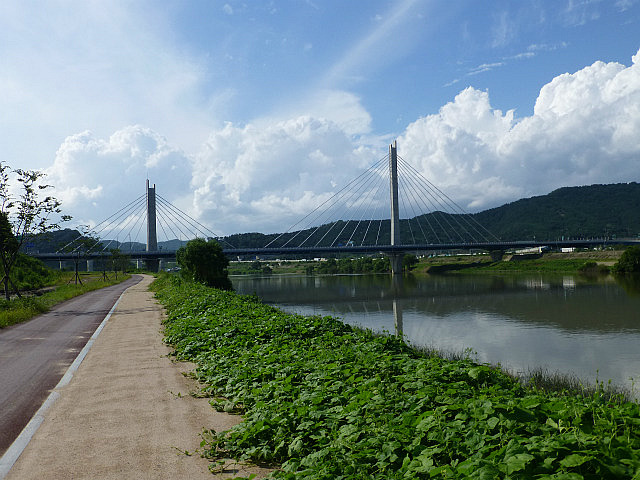 Considering this is a major Korean city its quite tranquil and peaceful and quite removed from an urban setting. You would think you were out in the wilderness somewhere. However theres no need to panic as other bikers will regularly pass you by so no feeling of isolation. 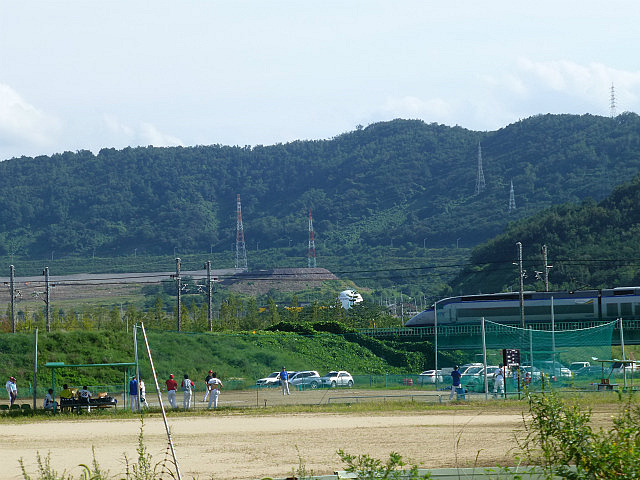 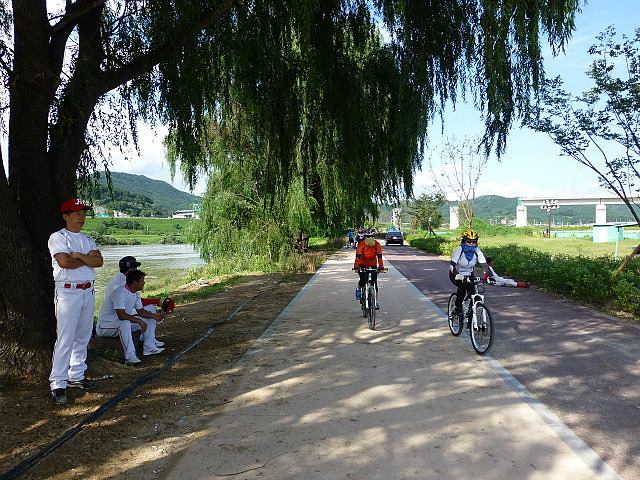 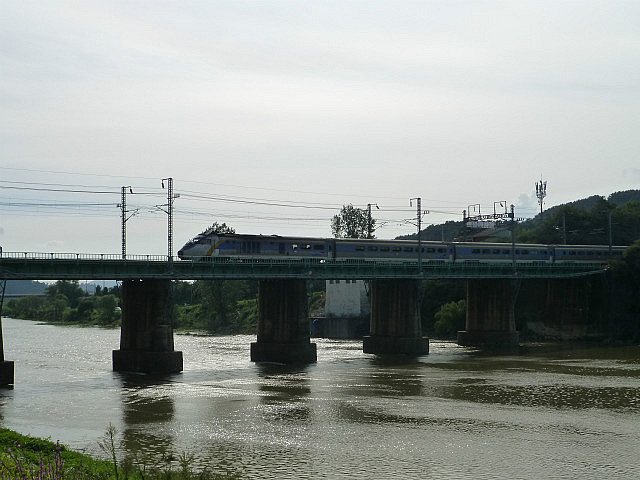 An interesting section is a baseball field west of the Jungang Expressway crossing where the KTX line also crosses the river. As you wait KTX and Muganghwa trains will pass at regular intervals in both directions although it takes lots of waiting to photograph. 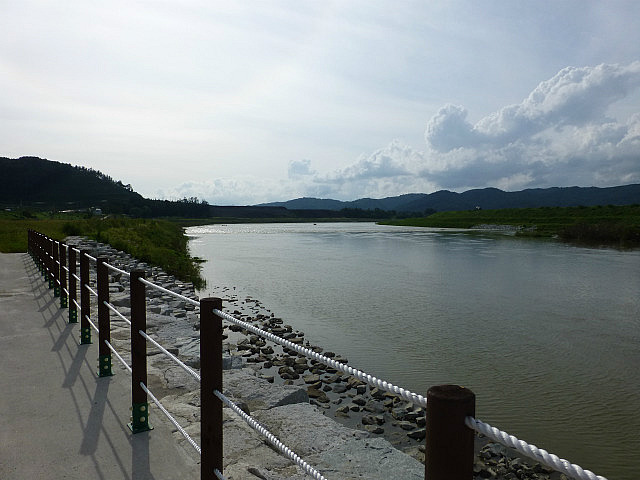 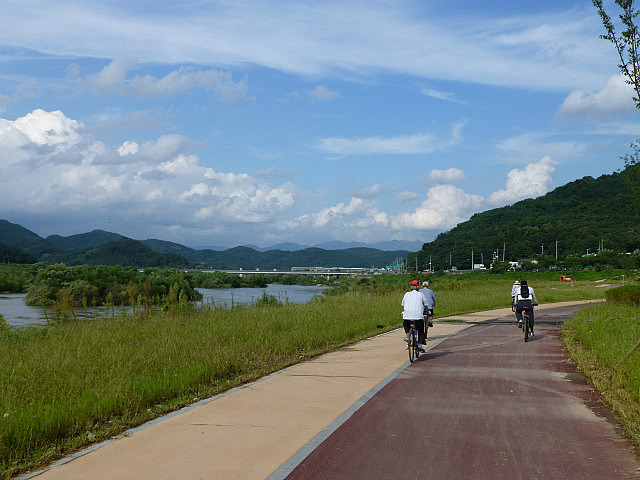 The path will continue west thru Seojae-ri towards Dasa and the end of the Green Subway Line. However, I turned around to head back downtown. Again its very peaceful and isolated like being in the countryside, far removed from being in the city. I passed back by the KTX crossing where trains were passing at regular intervals. 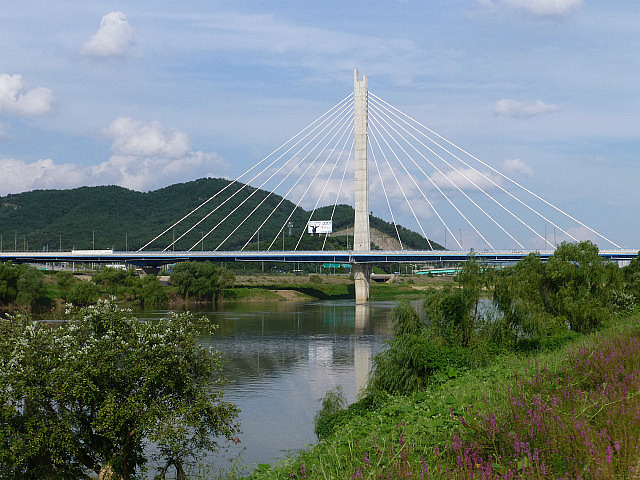 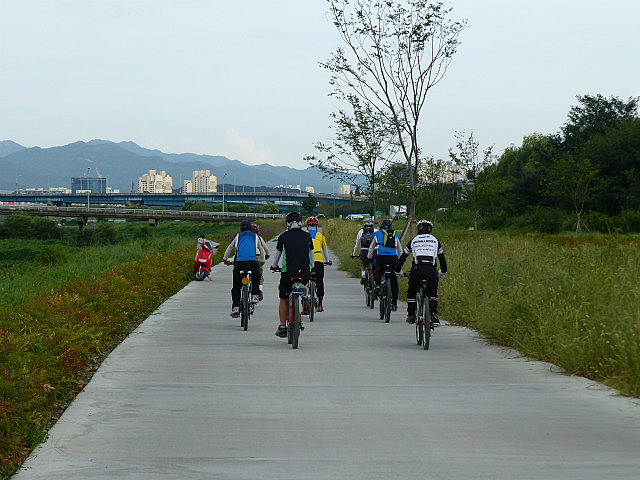 There are also many types of river crossings with various types of architecture. Passing back under the Paldal Bridge and new Line 3 crossing I headed towards downtown where the trail had more bikers. 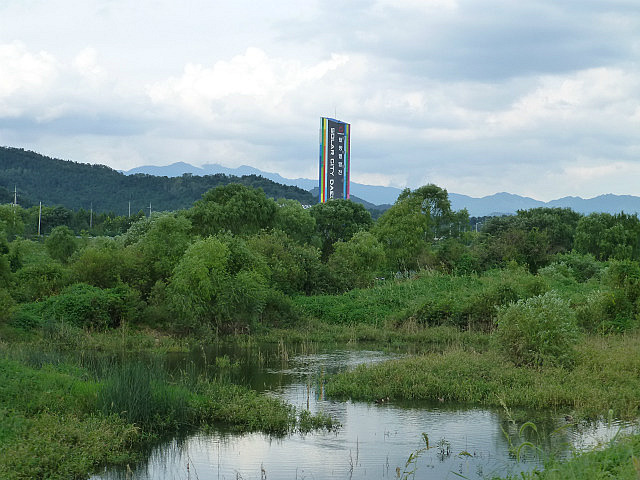 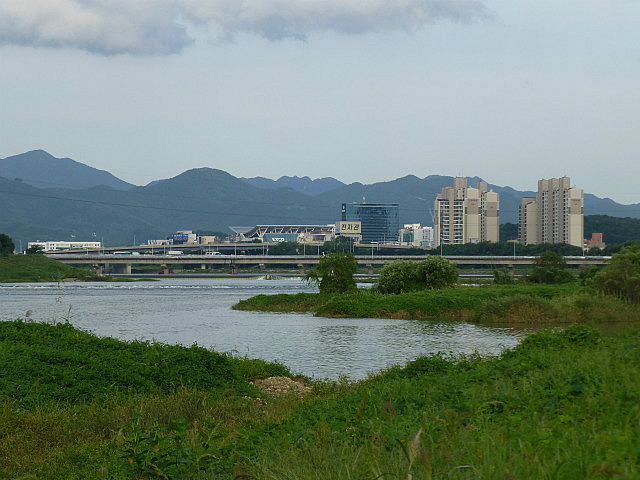 I passed by the Daegu Solar city and you can see the Exco further in the distance. 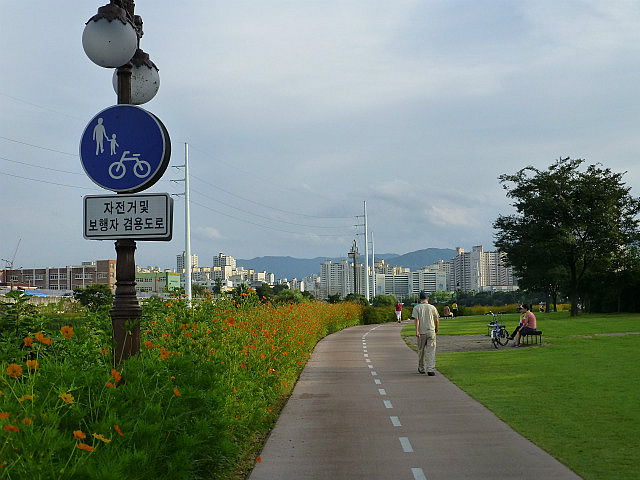 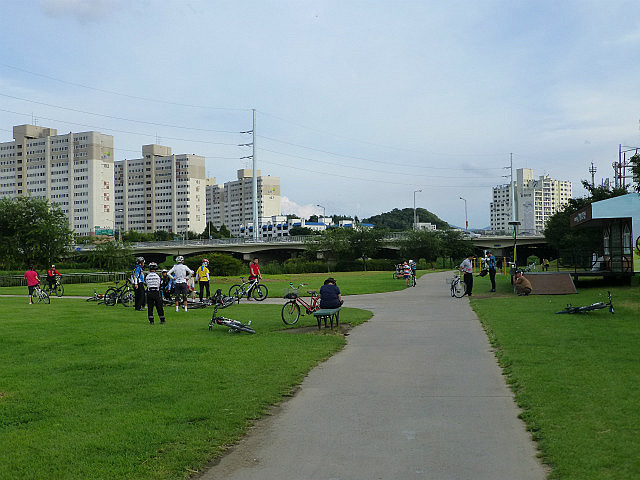 Shortly after you will come to the Sincheon River crossing. Here you have the choice of going south thru downtown, or crossing the river and continuing to head east. I headed east as the downtown path is more crowded with bikers, joggers, pets, people strolling, and children. 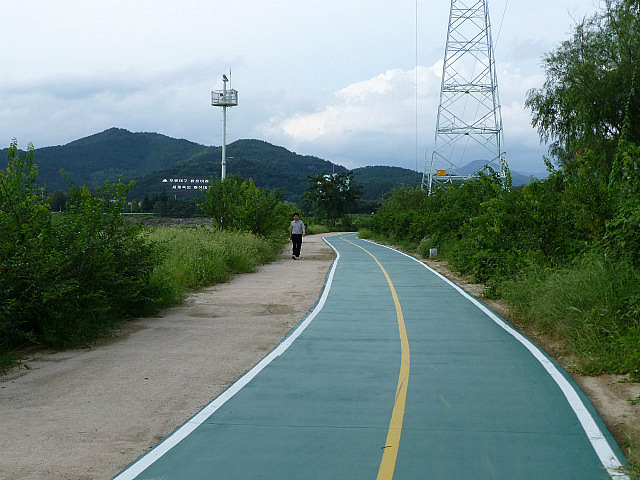 East of the Sincheon you come to an older part of the trail painted like a track and a popular fishing spot. There is also a rare sign marker indicating 4kms back to the Paldal Bridge. 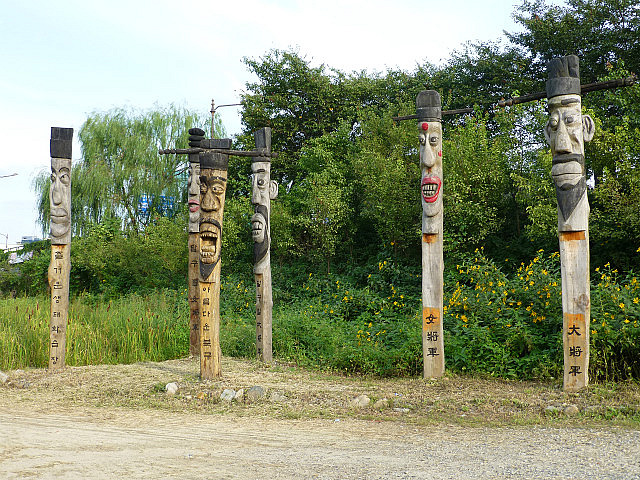 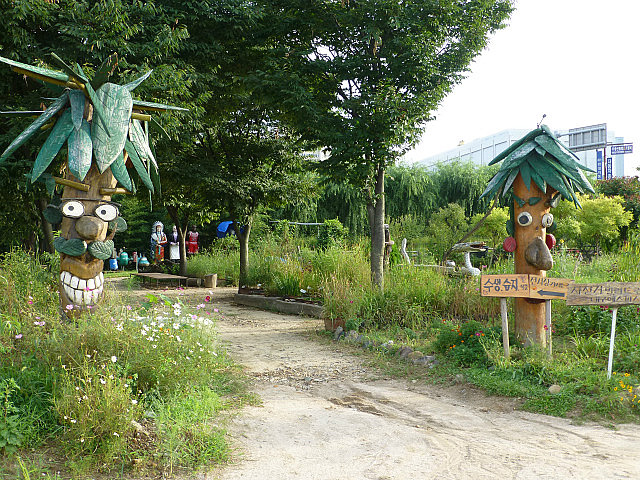 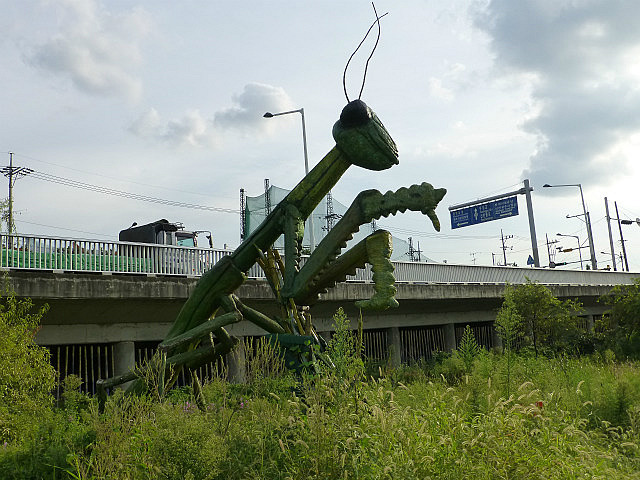 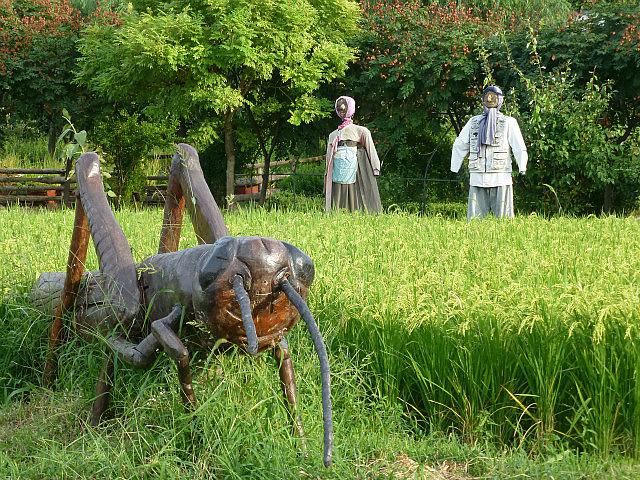 Just east of the Sincheon is a strange vegetable field. It starts with many carved head totems similar to the ones in Andong. There are also giant sized crickets and insects, and friendly looking scarecrows. 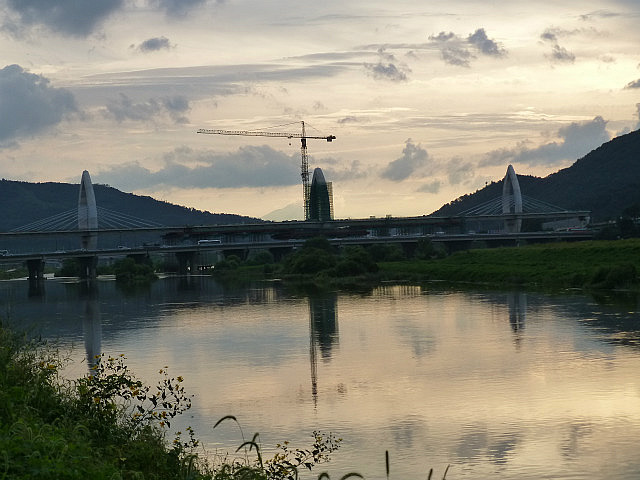 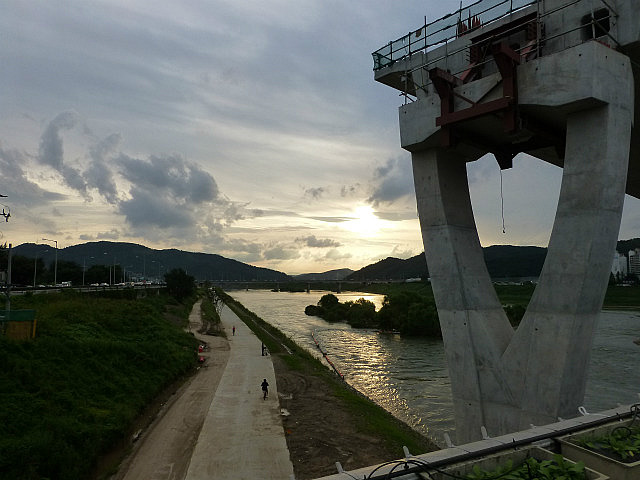 I now returned back as my tires were having problems so I need to get them changed as I bought this bike used. It was another 4kms back to the Paldal Bridge as the sign indicated and the sun was now beginning to set.

I've heard the trail runs from Andong to Busan (maybe 200kms) though I’m not adventurous enough to actually test if that’s true. However I will continue to explore east and westbound on weekends and while the weather is good.