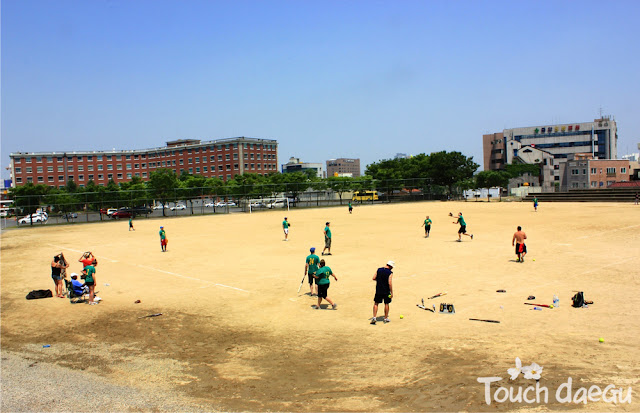 It’s a steamy summer day, a scene laden with nostalgia: the distinct pop of a fresh can of beer; a row of hot dogs sizzling on a charcoal grill; the crack of a bat followed immediately with audible admiration from the crowd; caps, gloves, and Gatorade strewn among the spectators. To the waegookin, it might sound a picturesque day back in the homeland, but here in the DSL, it’s any given Sunday. 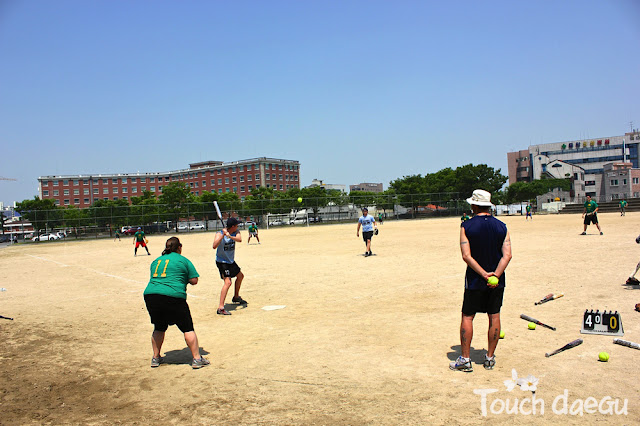 The Daegu Softball League is midway through its seventh season, a ten-team, 120-player vehicle of Sunday fun. It’s been named “the best sports league in all of Korea,” and though we can’t exactly verify by whom, after a Sunday spent hanging out with the DSLers at Keimyung University’s Daemyeong-dong Campus Ballpark, we can’t disagree. DSL co-founder Chris Bolger says he and his buddies started the league when they got “tired of sitting around in bars drinking,” and wanted to do something a little more active—like take their beverages outside. A beer league it is, but no one could argue that the league isn’t incredibly competitive—our conversation with Bolger was peppered with “oohs” and “aghs” from the crowd, heckles and hurrahs, cheers, curses, and some powerful cracks of the bat. Even so, no loss in this league is so distressing that it can’t be soothed with some maekju—the DSL keeps a cooler or two full of Cass at all games, selling beer for 2,000 KRW and routing all the profits directly back into the league. 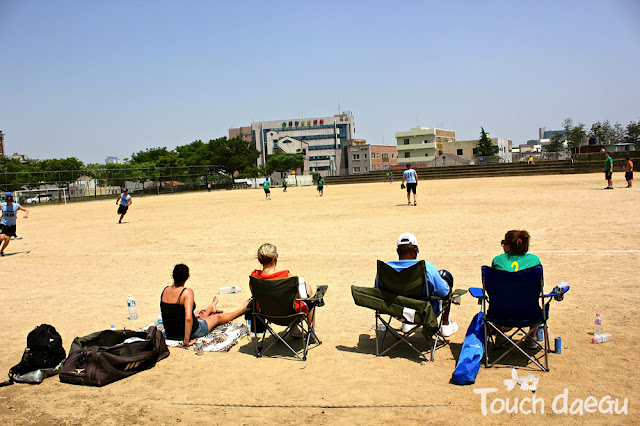 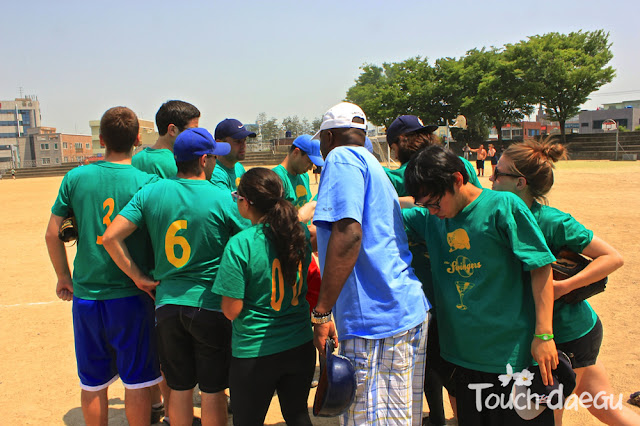 From its humble beginnings back in 2007 with just four teams, the league has grown each year, more than doubling in size to its current ten. Foreigners, Koreans, men and women share an equal playing field, with 12-13 members on each squad (with memorable team names such as “We Got the Runs”, the “Multiple Scoregasms”, and the “Pitch Slappers”), and everyone gets time out on the diamond. Each team has three girls, two of which must be in play at all times. Bolger says the decision to go co-ed was conscious. “We’ve always been co-ed, just to have as many people involved as possible, and to keep that buzz too—if it was all guys, it’d just be too much testosterone.” 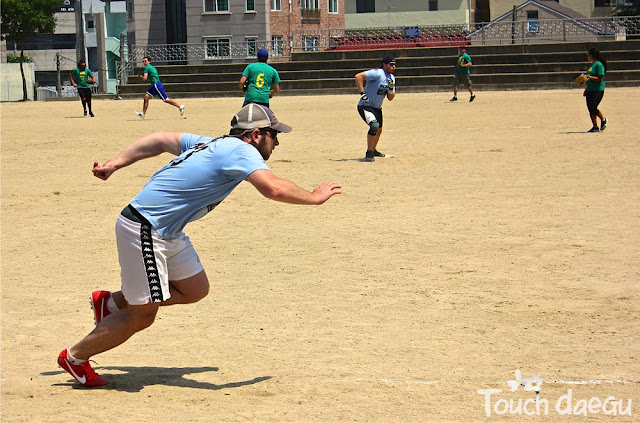 The DSL is packed full of perks for its players, like a regularly-updated website with stats, standings, and power rankings. There’s a weekly podcast, sometimes two, and pictures, videos, and articles written by some of the walking caricatures you’ll meet walking around a DSL Sunday. There’s an opening draft night after the captains pick their teams (word is it gets rowdy), and a banquet to close out the season with your standard roster of awards, separated by sex: Rookie of the Year; Most Improved; and MVP, as well as the coveted Championship Cup. But the biggest perk of the Daegu Softball League is pretty apparent after an hour or two on the bleachers, and Bolger puts it best. “The cool thing for me personally is watching people come out and do something awesome. A girl was going to get a fowl pop-up, and she missed it and she missed it. She got the next one and everyone cheered for her,” he says, his tone echoed by more excitement from the stands, another all-star play in the making. 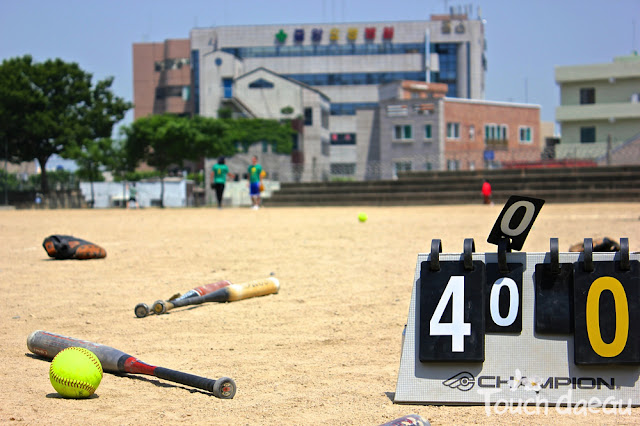 “You can come to the park and make 119 friends by the end of the season.” Judging by the claps of high-five, the growing pyramid of empties, and the merry mob of players lingering from games finished hours ago, we’d say he hit that one right on the money. 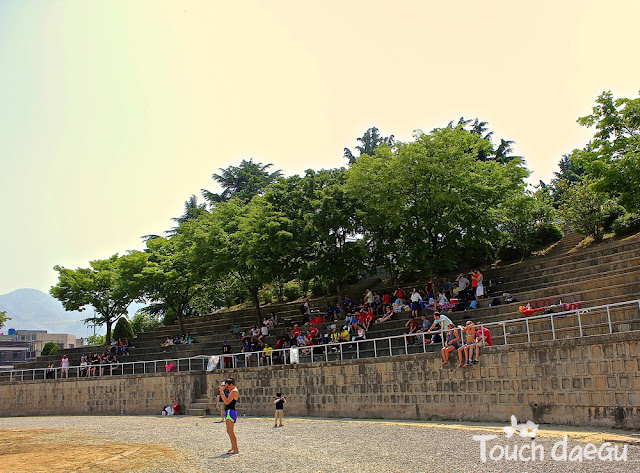 The Daegu Softball League runs every year from April through mid-June. If you want to sign up for next year, or just learn more, head on over to http://www.daegusoftball.com.
Facebook: https://www.facebook.com/groups/309846349119550/ 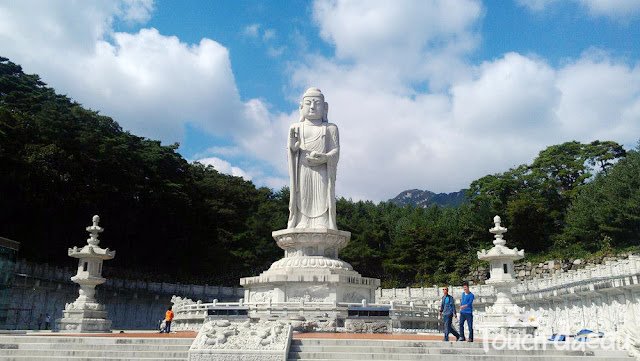 Donghwasa, a time-honored Silla temple, is located in the Dohak-dong Valley in among Pokpo-gol, Bindae-gol and Susut-gol valleys. It was established by Priest Geunkdalhwasang in 493. At that time it was called Yugasa(temple). Later, when the temple was rebuilt by Priest Simji, it was renamed as Donghwasa because flowers of the paulownia trees were in full blossom foretelling a good omen. Bongseoru Tower, the first building you meet in this temple, symbolizes the phoenix which is known to build its nest in a paulownia forest.  It forms a good combination with Donghwasa which represents the paulownia tree.

If you enter the precincts of the temple via the Bongseoru, Daeung-jeon Hall was built during the reign of King Yeongjo and the supporting poles made of twisted wood show the natural beauty of the building. If you climb up the Daong-bong Peak following the tracking course near the Yeomburam Hermitage, a panoramic view of Palgongsan(Mt.) unfolds before you. On a fine day, Biseulsan(Mt.) and Gayasan(Mt.) also come into sight.

When entering the Pagyesa, you can find four noble buildings are arranged in the shape of 'ㅁ' which include the Jindongru Pavilion, Seolseondang Hall and Jeongmukdang Hall around the Wontongjeon Hall. Pagyesa had a special relationship with King Yeongjo of the Joseon Dynasty. During King Sukjong's reign(1674-1720), the king once had a dream  in which a priest was entering into his palace. Even after he woke up, the dreamseemed so real that the King ordered one of his retainers to take a look at the Namdaemun Gate.

Strangely enough, a priest was taking a rest in front of the gate. He was  Priest Yeongwonseonsa. The king was suprised and asked the priest to pray for him so that he may have a prince. Some time later, one of his wives showed signs of pregnancy and the next year she bore a prince. The prince was to become King Yeongjo. Highly pleased, King Sukjong bestowed the title of "Hyeoneung" to this priest. Thanks to this special relationship, a monument and Sarira stupa for Priest Heyoneung and a royal robe of King Yeongjo can be seen Pagyesa.

3. Buinsa
If you drive toward Sutaegol Valley from the Donghwasa, you will come to the Buinsa and Pagyesa consecutively. Drive along the road passing the milestone to the Buinsa, see grape vineyards spread on both sides of the road and then you will arrive at the temple.

The temple was founded as an affiliate temple of the Donghwasa in about the 7th century. It enjoyed a nationwide reputation as a temple to wish for the good of Queen Seondeok of the Silla Dynasty. During the Goryeo Dynasty, Chojo-daejanggyeong, Buddhist sutras recorded on woodcuts created for wishing to protect the country from the invasion of the Kitan, had been kept in this temple.

When the temple was most prosperous, the neighboring vineyards were known to have belonged to the temple. On the premises are the Samseonggak building and Seondeokmyo, a shrine where a memorial service took place every March of the lunar calendar.

Bukjijangsa, a branch of Donghwasa, was built during the Silla Dynasty in 485. It is famous for its main building called Daeungjeon. There is a pair of three-storied stone pagodas in the east of the Daeungjeon. In addition, a Jijang Bodhisttava stone statue remains. It is known that this statue was found in the ground, probably having been buried in the mud after heavy rain. There are signs along the road from Baegan-dong Intersection to Donghwasa. You can take a trip to the valley with clean water and paths in a thick pine tree forest.

[Press Article] San francisco based musician 'The Dodos' in Daegu! 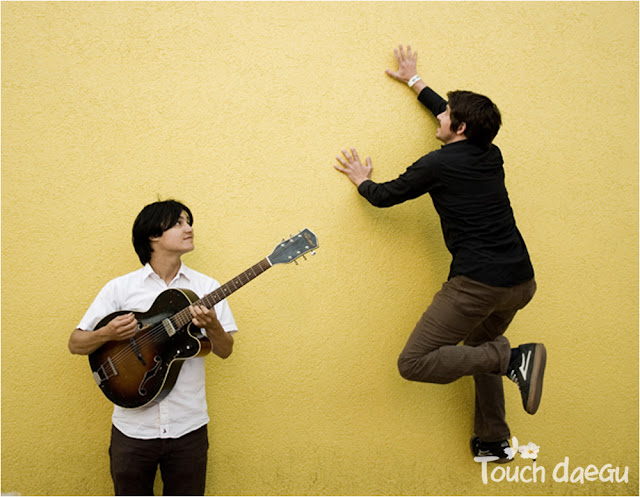 The San Francisco duo known for their aggressive acoustic and relentless heart pounding percussion lived up to their reputation at their Thursday night(May 23th) performance at Daegu’s Horus Music Garage. They are currently touring some parts of Asia promoting their latest album “Carrier” and Daegu was lucky enough to be one of their stops. With 5 albums under their belt they have a gradual increase in fan base all over the world. “The Dodos are known for using an alternate instrumental approach. Logan Kroeber plays on a drum kit without a bass drum, playing often on the rims of the drums, and also uses a tambourine taped to his shoe and Meric Long plays mainly acoustic and semi-acoustic guitars during performances. 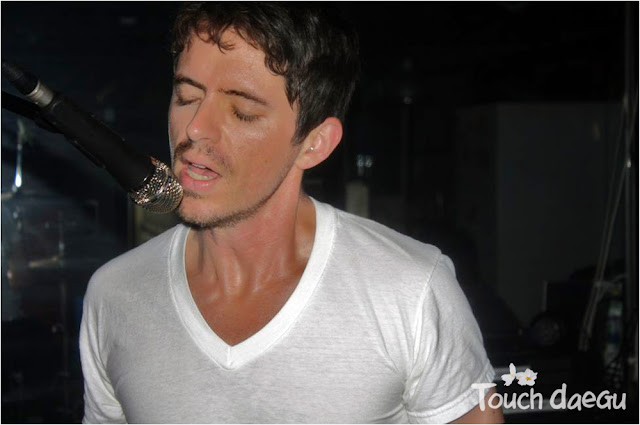 I do know and love “The Dodos” music, but had never imagined I’d see them in concert so soon and by chance. As soon as I walked in I noticed Meric and Logan sitting in the smaller secluded (VIP) room with big glass windows, and later casually walking up and down the bar, setting up their stage performance with people barely noticing them. The authenticity is what I have come to respect about indie bands. They place more value on their craft above all and do it merely for the sincere love of it. Their fans know their music and might even rarely recognize them in person and that is why these type of shows, that don’t necessarily attract a very large audience are more appealing and more memorable. 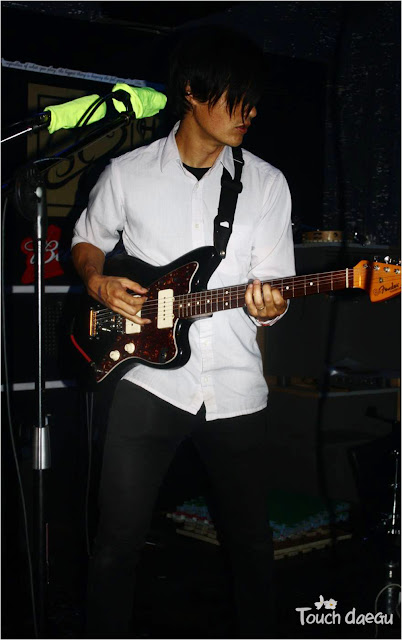 The opening was by a Korean band called “picnic in the Rain” a four man band with a very obscure sound.  Their music is what may come as a surprise to what expats have come to think of Korean artists, their music sound is similar to a lot of garage bands, which can sometimes be characterized by mellow to loud and over-powering bass. A great set nonetheless.

The Dodos sure did leave an unforgettable performance, their chemistry and connection as a duo gives them a very rare quality music execution. Their interaction with instruments is electrifying. They almost look like musical soul mates on stage. Despite the small venue and audience they still put on a great set performance coupled with flawless sound tech in a very intimate setting. 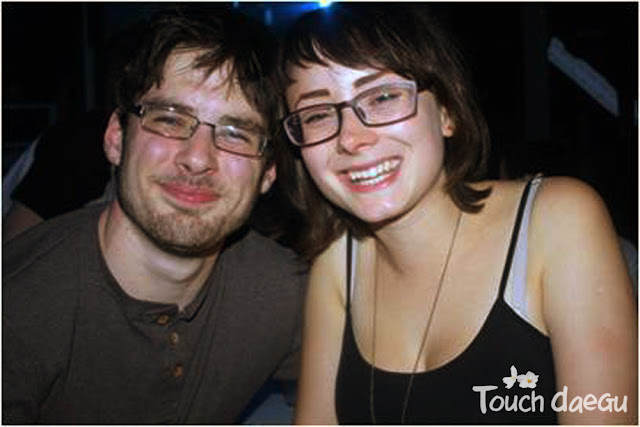 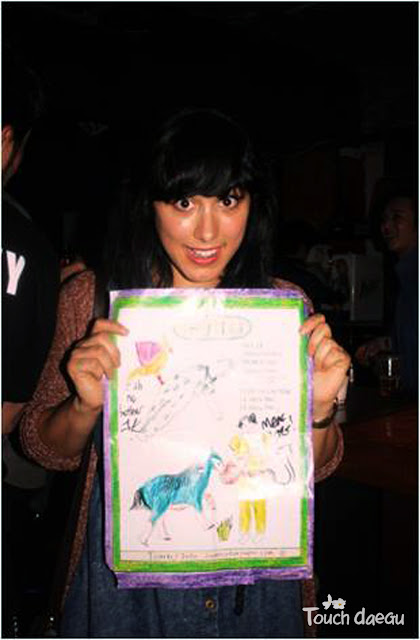 Daegu is a great city and hopefully we’ll get to experience an increase in the live music scene in the near future. The lack of regular live shows proves that there is a great gap that needs to be filled both for the live music loving crowd as well as provide more support and creative platforms for aspiring bands alike.  If you’re a live music enthusiast, Bars like Horus and Urban downtown Daegu have regular live shows.
The music & arts collective SuperColorSuper  (DIY Daegu)is  to thank for the amazing experience. Check out their Facebook page for more exciting events in the future. If you missed WYE OAK and The Dodos be sure to  catch “This will Destroy you” on the 6th of June in Daegu.
Daegu has just become Supercoloful~