Do you ever feel like you’re here to serve a higher purpose? One more lofty than correcting children’s verb conjugation and failure to use articles? A higher calling than struggling to string together annyeong-haseos and juseos, and arduous attempts at Hangeul? Hey, well don’t worry, we here at Colorful Daegu have got a suggestion to save your souls. Well, at least for a weekend. 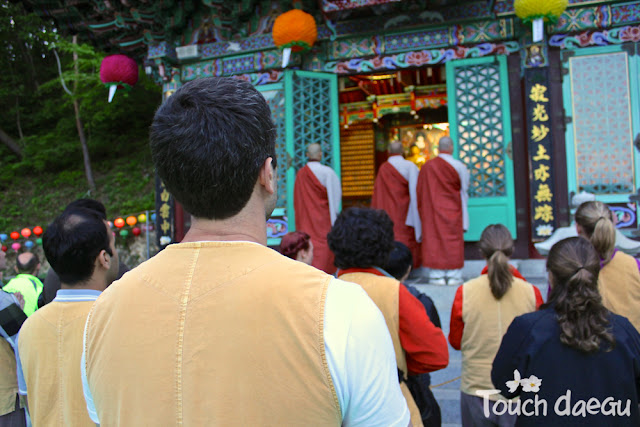 On Buddha’s birthday we trekked out of Daegu to spend a night at Golgulsa Temple just outside of Gyeongju. And walking up to the temple grounds (up, because this temple is situated on a mountain), we got the idea that we weren’t just in for a standard temple stay, if such a thing exists. Our hike was dotted with statues of varying degrees of terror, monks with 12-packs and bulging eyes wielding katanas and spears. Umm, what happened to that peace and serenity thing we signed up for? 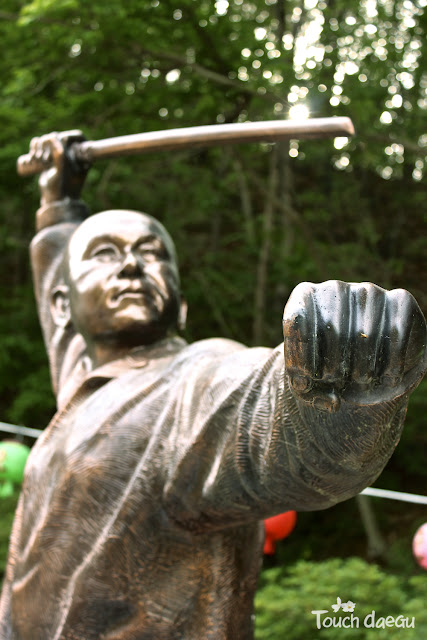 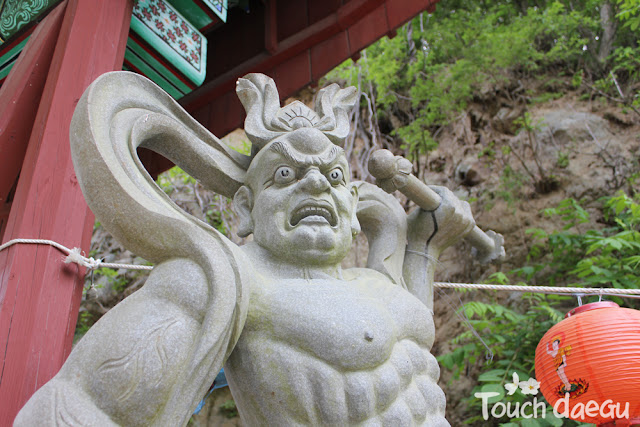 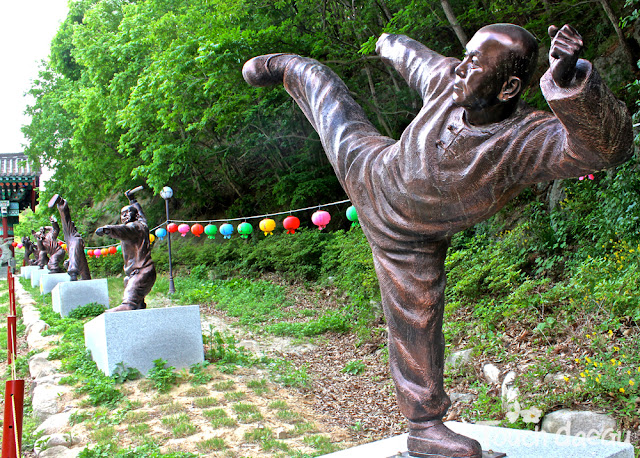 Trekking on with our guard raised, we were delighted to see a kind and smiling foreigner at check-in, and given our schedule, map, and room key. First on our tightly-scheduled agenda was dinner, and our most pressing fears of the Temple Stay were immediately quelled upon seeing the meal’s offerings—self-serve veggie bibimbap, portion sizes plenty big enough. While all temple food is vegan and absent of garlic, onions, and other intrusive foodstuffs disavowed by strict Buddhists, our meal was tasty, more than sufficient, and served with dessert. No blocks thus far on the road to oneness, at least in the cafeteria. But our first barrier was quick to come in form of the walk to our evening chanting and prayer session. Perhaps harder than learning how to bow and chant in Korean simultaneously, the fifteen-minute climb to the mountaintop was a little harrowing—but it did help us to relax our bodies for what was to come. 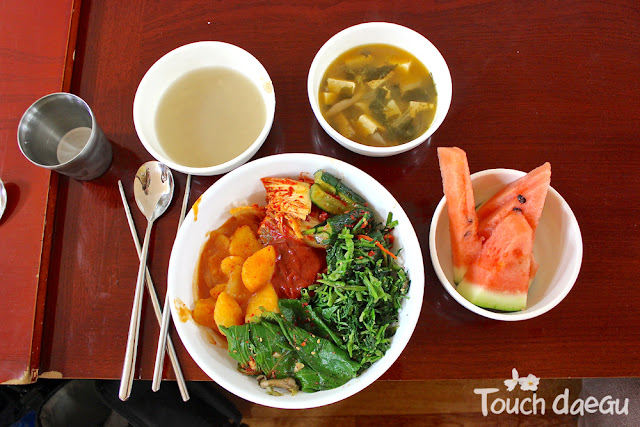 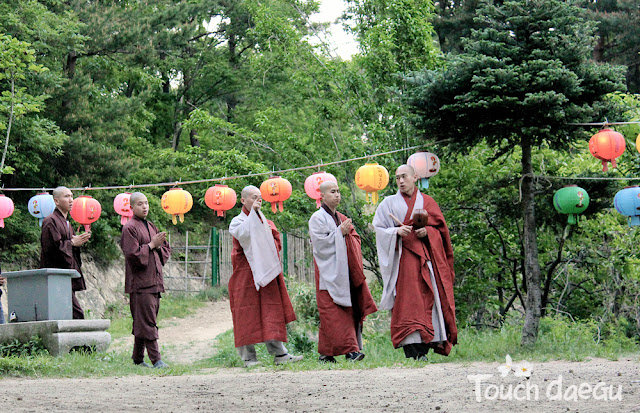 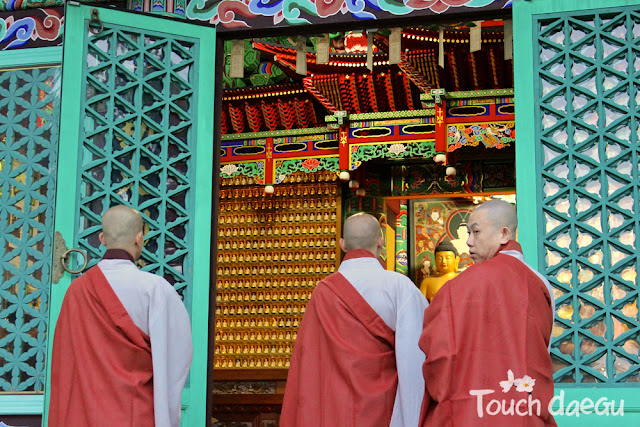 Our guide gave us a quick briefing with all of the other English-speaking temple stay overnighters, enlightening us on the basics of bowing, meditation, and chanting and a little background on Buddhism. But nothing could do justice to our next experience, in which the monks, long-term templestayers, and dedicated Buddhists came to share in their evening bows, meditation and chanting. Though our western hips and knees were furious, the rest of us felt incredibly relaxed, in awe of the pureness, the beauty, the simplicity of it all, the good vibes quite literally created through our many-toned chants. We paid our respects through bows and song to the giant Buddha statue ahead, resting reverently at the top of a mountain cliff with rows of colorful lanterns directing the eyes upward, the reverberations of millennia past echoing in our minds; deep, whole, majestic. With higher vibrations still ringing in our ears, we strode, slowly to the beat of the monk’s drum, circling the grounds with virtuous pace. Soon as it began, our evening with the monks was over, so we did as any devout followers, and went early to bed. 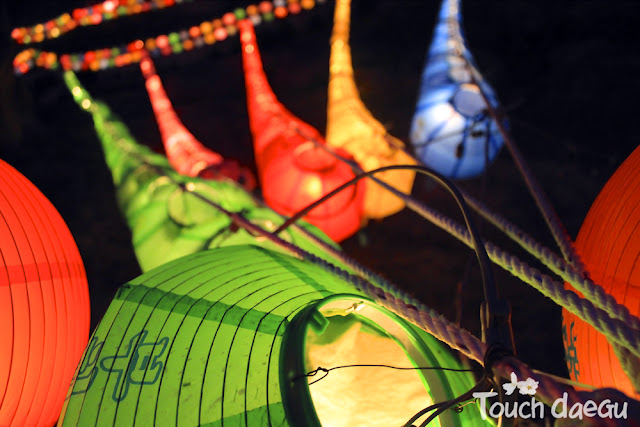 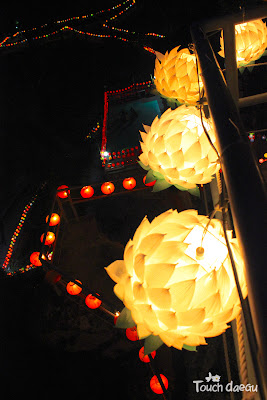 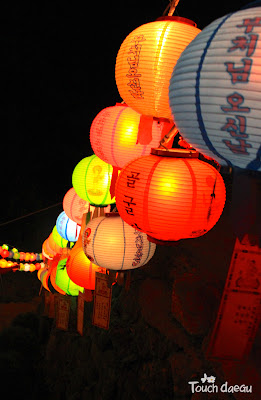 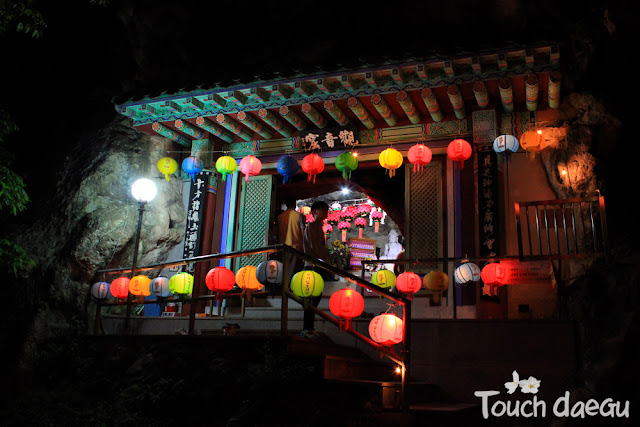 At 4:00 a.m., the alarms goes off. Usually at this time we’re still dizzy by Daegu neon, but this morning (tonight?), we’ve shunned our past pagan activities and trek upwards again for morning meditation and chanting. Word is that latecomers will be dealt 1080 bows—or maybe it was blows?—either way, it was reason enough to be punctual. At 4:30 a.m., we began the series of chants again, following our laminated, Romanized-Korean notes on the floor. Drop to the knees, bow the head, keep one eye on the page, raise the palms up, turn them down, back to the knees, swing up to the fee—crack!—clearly us foreigners are not meant for this kind of piety. Sit outside in the morning mist, clear your mind, forget about the frigid early cold. You’re meditating with monks on top of a mountain for chrissake, and it’d be breathtaking if the air wasn’t so clear and fresh. 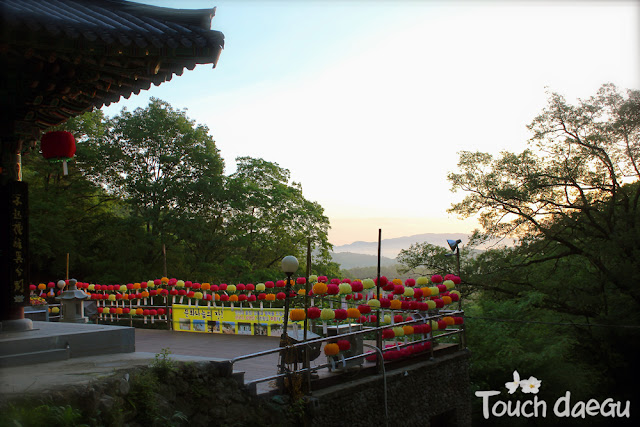 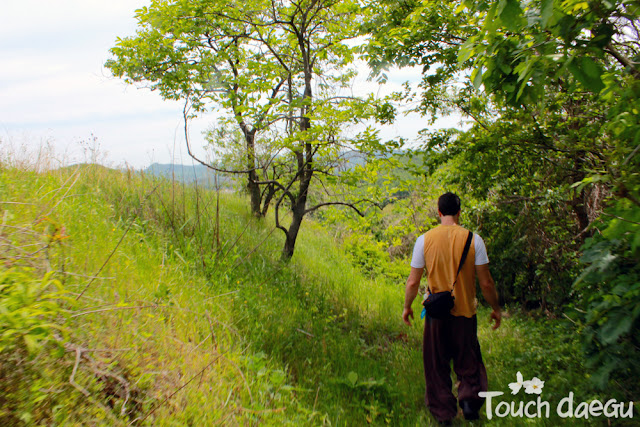 Due to Buddha’s Birthday, our itinerary deviated from the norm and we unfortunately couldn’t practice the regularly-scheduled Sunmundo, the meditative martial arts that Golgulsa is known for (hence the treacherous figures accompanying our initial entrance). Sunmundo originally developed in Korea during the Shilla Dynasty, when monks were called on not only as spiritual leaders, but also as temporary protectors of the people, fighting off invasions by foreign powers. In the 1900s, this unique combination of martial arts, meditation, yoga, and chi qong was revisited and introduced to the general public, with Golgulsa as its world headquarters. Instead of our own training in the ancient art, we went on a hike of the surrounding area and learned a few basic moves amongst the trees—gestures beckoning to nature, the higher power, and the energy within ourselves. And while we didn’t get to try out the art ourselves, we did take in a demonstration—one of the twice-daily public stagings—as the final feature of our stay. The act was marked by a showing of incredible strength, flexibility, agility, and air time, and a deep, energetic focus surely only attained through hours upon hours, years upon years of meditation and dedicated training. An incredible paradox of zen and zeal, yin and yang. Although it wasn’t what we expected from a Temple Stay, it was a unique experience and one unquestionably worth pursuing while living in this part of the world. Oh yeah, and one other thing was pretty clear, too—with these monks, you don’t want to disturb the peace. 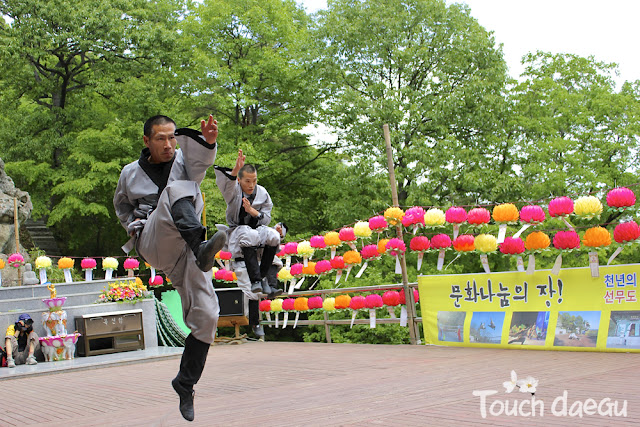 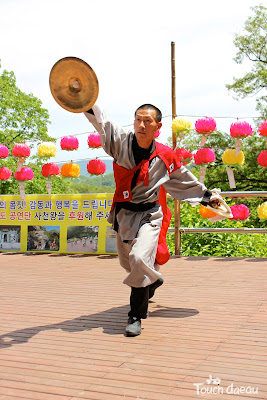 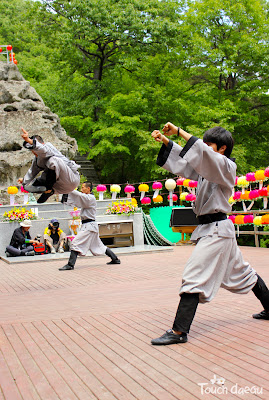 It’s easy to register for Golgulsa Temple Stay through Templestay.org, where you can see the varying programs offered and register for upcoming events. We corresponded with another foreigner working at the temple and had no problems with communication whatsoever. Golgulsa’s website: http://sunmudo.net/ has plenty more information on the program, including a list of rules, what to bring, and sample itineraries.

Golgulsa Temple Stay is easily accessible from Daegu through public transport. Take the bus to Gyeongju from Dongdaegu Station (803), and from Gyeongju’s Express Bus Terminal, cross the street (so you are across from the Information Booth and next to a bicycle shop) and take Bus 100 or 150, get off at “Girimsa, Golgulsa, and Andong Sam Giri” which will be announced on the bus intercom. Turn left at the fork in the road and walk for about ten minutes, the temple will be on your left. Full comprehensive directions are on the website here: http://sunmudo.net/lang/jp/contact-us/route-contact/http://sunmudo.net/lang/jp/contact-us/route-contact/