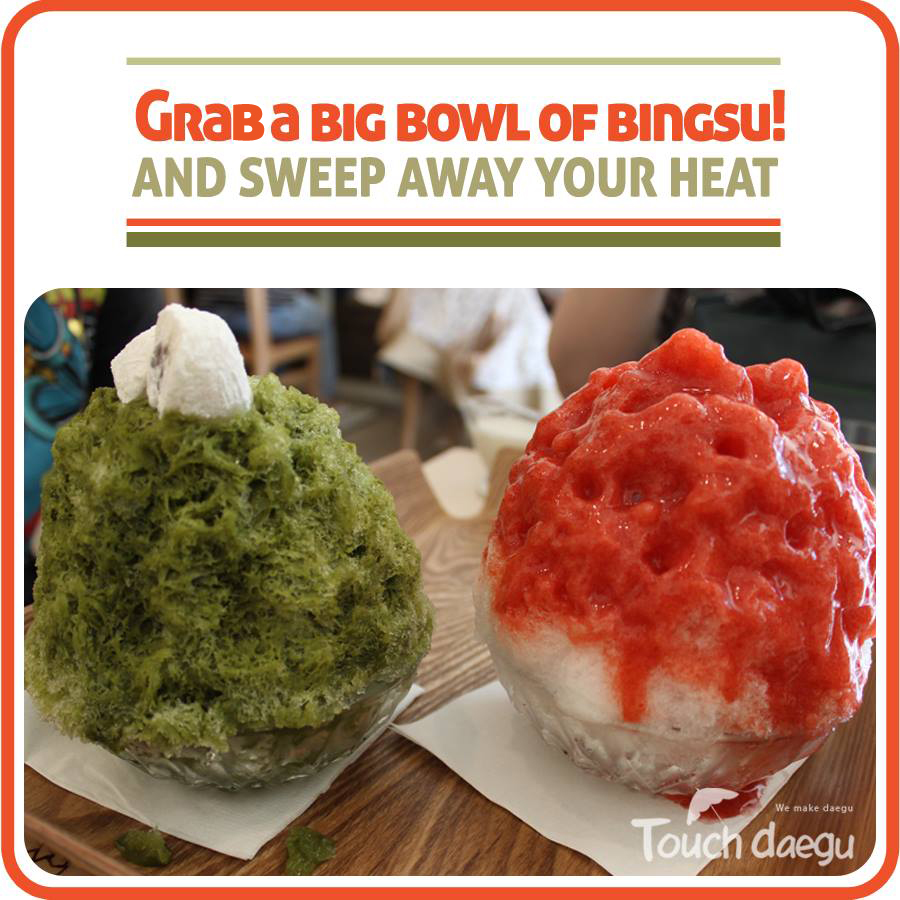 As everyone knows, Daegu is the hottest city in South Korea during the summer. As summer is fast approaching, it’s important to find ways to cool off. There is no better (or more delicious!) way to do so than to grab a big bowl of bingsu. Bingsu is a Korean shaved-ice treat. Traditionally, sweetened condensed milk is put at the bottom of a big bowl of shaved ice, and the ice is topped with sweet red beans and chewy rice cakes stuffed with red beans. Don’t worry if you don’t like red beans, though, because the options for bingsu extend way beyond that! You can find it in several flavors and with a huge variety of toppings. Bingsu doesn’t feel as bad for you as ice cream because it is made from ice and is very light. In fact, the indicator of quality bingsu is the ice. The best bingsu has ice that is almost like snow.
Bingsu runs about 10,000 won per bowl, but the bowls are large enough to share between two or even three people. Like ice cream, you can buy it almost anywhere. There are bingsu cups at convenience stores and most coffee shops offer a few varieties as well. Although those are good (try the Dutch coffee bingsu at Angels-in-Us), they can’t rival the bingsu that comes from the actual bingsu shops. So here’s a guide to some of the best places to buy bingsu in the downtown area. 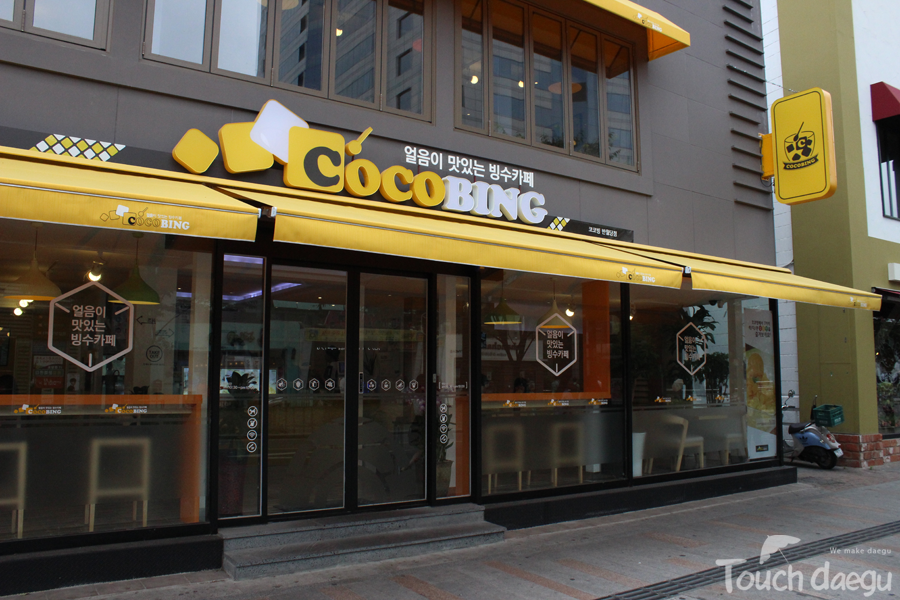 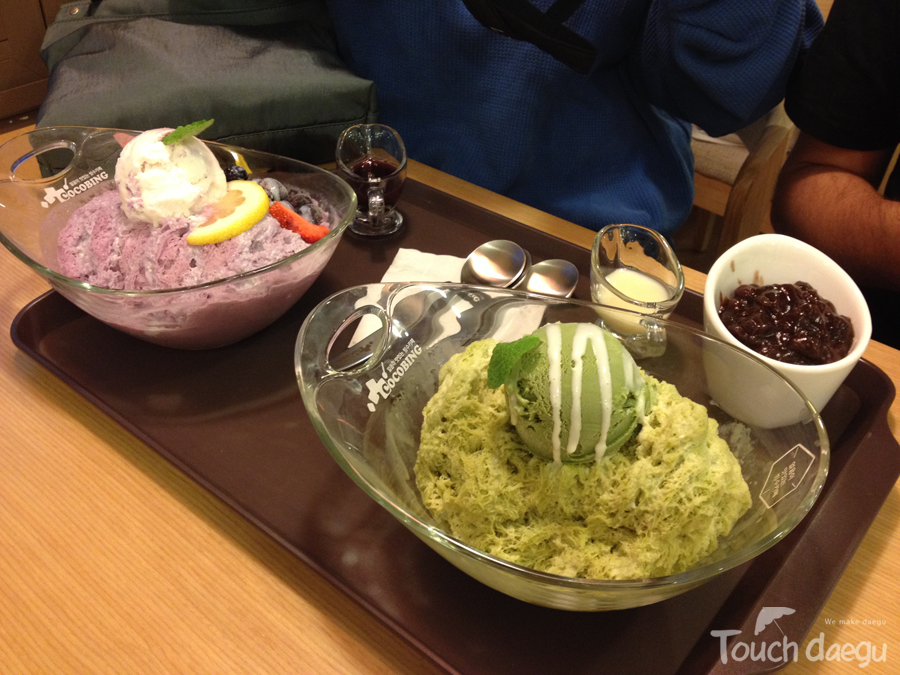 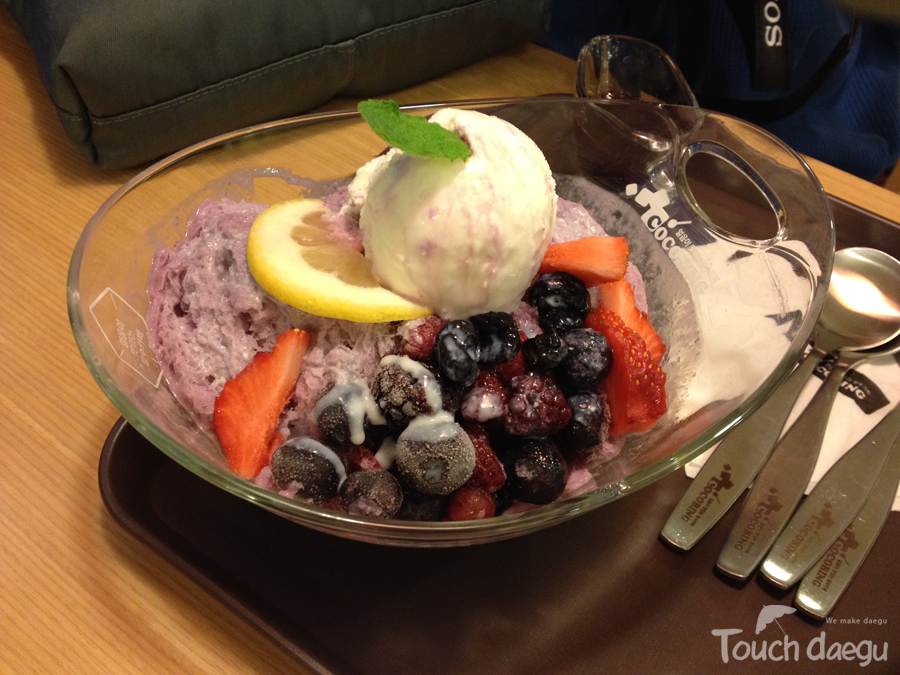 The first stop is a new bingsu shop that opened up across the street from the YMCA. It’s called COCO BING. It’s just a few minutes down the street from banwoldang station exit 13 near the outdoor fountain. Look for the big, yellow awning over the door. They have several wonderful fruit flavors, like blueberry and mango, as well as more traditional flavors, like green tea and milk. 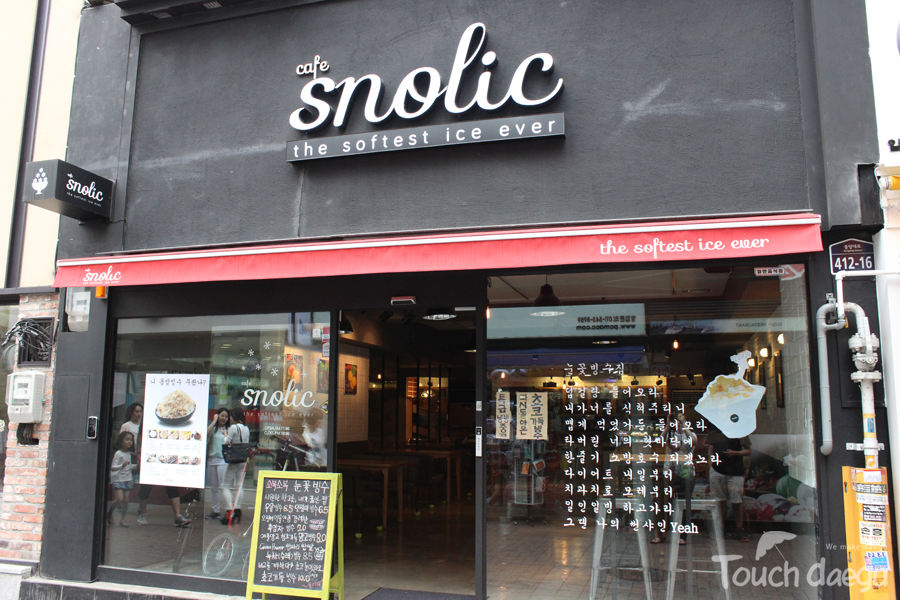 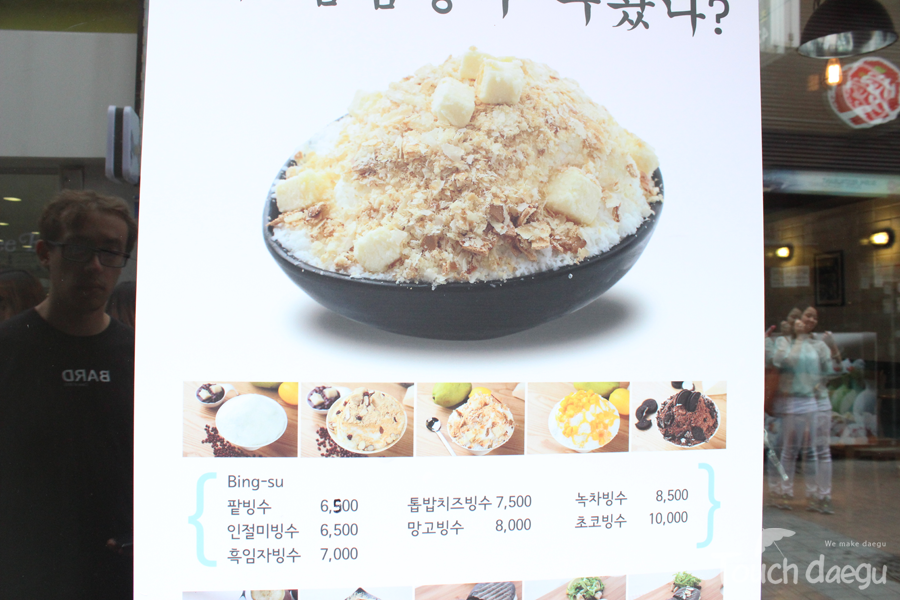 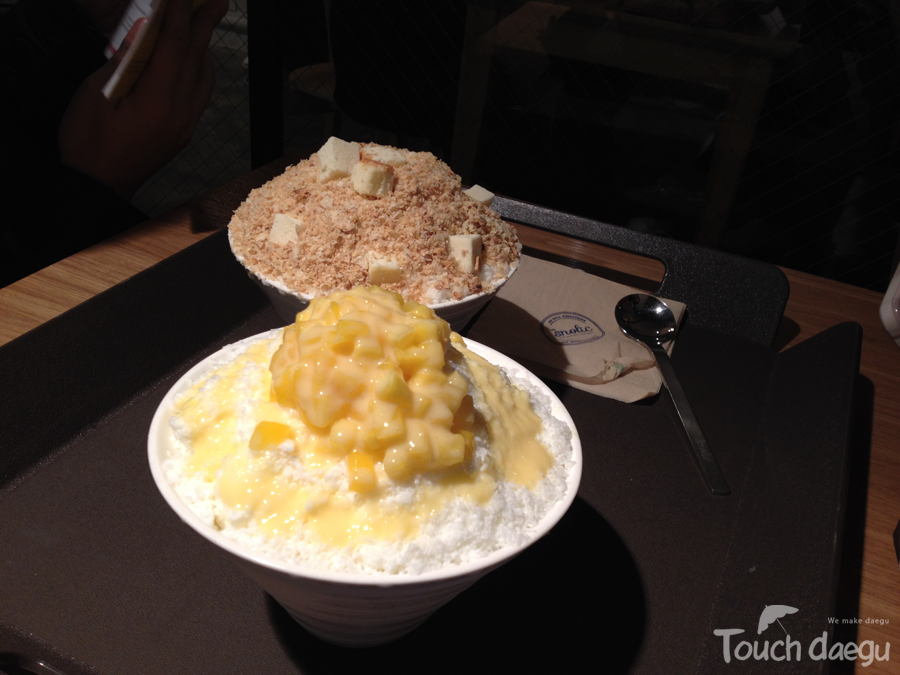 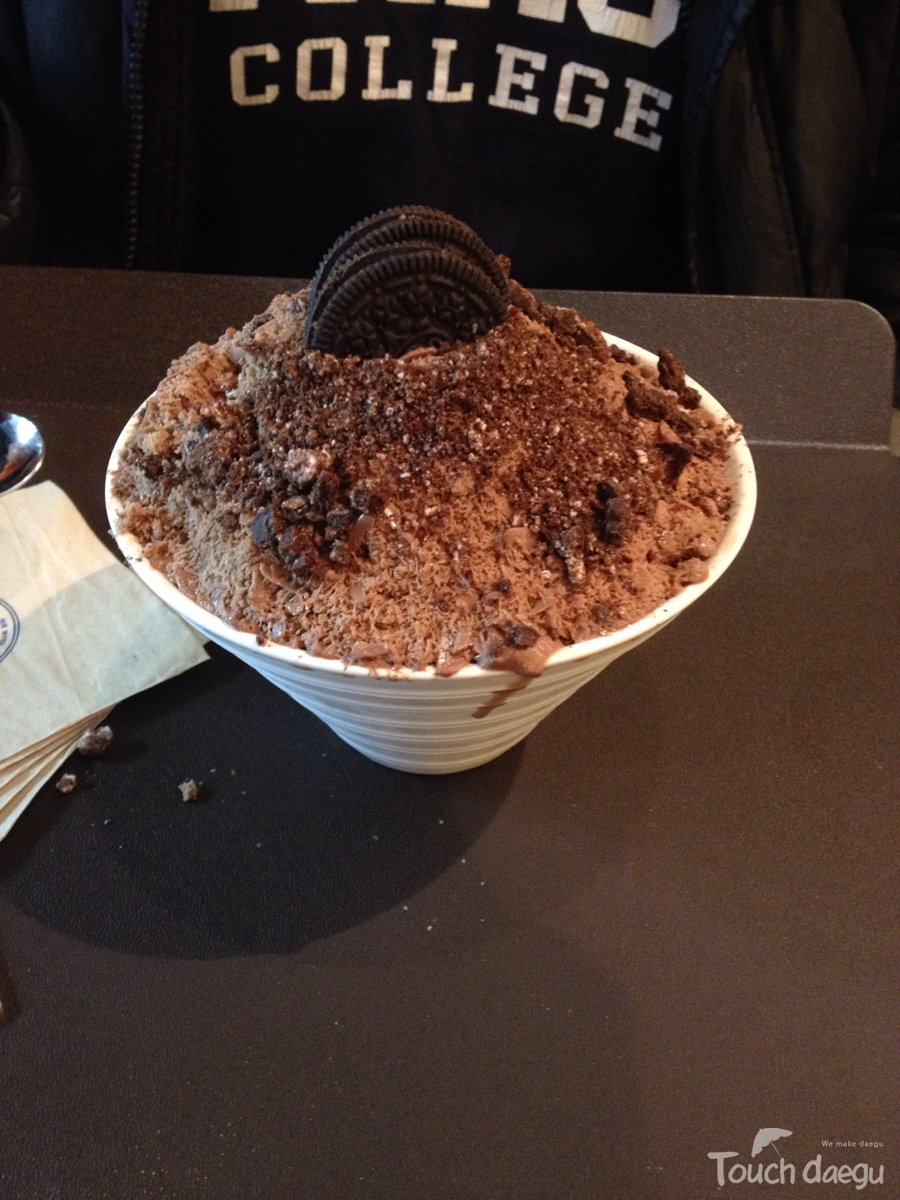 Another fantastic bingsu shop is called Snolic. It’s near H&M. Go out of the jungangno subway station underground mall at exit 10 (the newest exit near the statue of Singin’ in the Rain). When you’re at the top of the escalator, H&M will be on your right. Walk straight towards the stage, and make your first right down a side street after the row of make up stores. Snolic’s red awning will be on your left. They boast, “the softest ice ever,” and it truly is very light and not at all crunchy. Snolic rotates their flavors a lot, so be sure to check the sign outside to see what they have. Consider yourself extremely lucky if you get there on a day when they have chocolate bingsu. It’s like eating chocolate snow, and it’s topped with cookie crumbs and Oreos. They also have flavors like “cheese” (cheesecake) and mango. 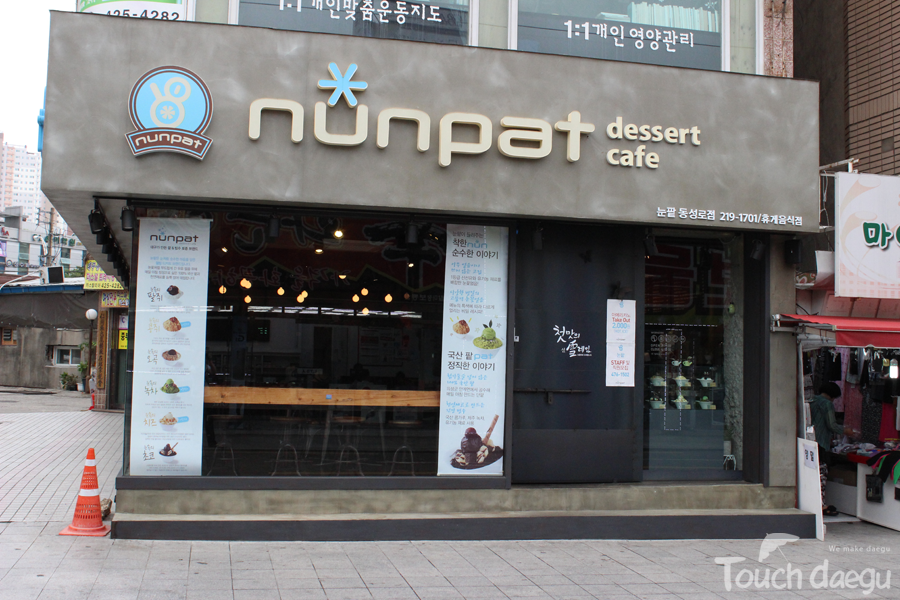 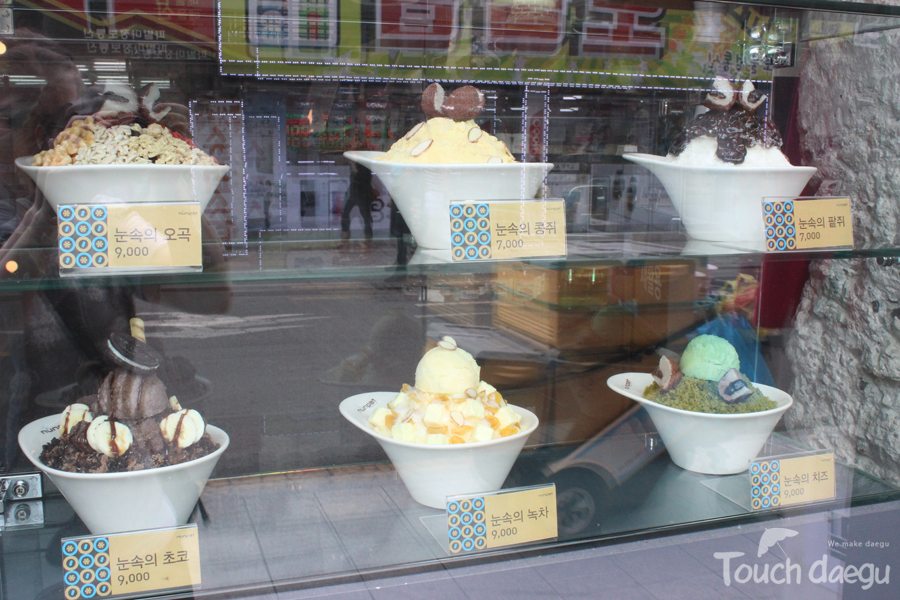 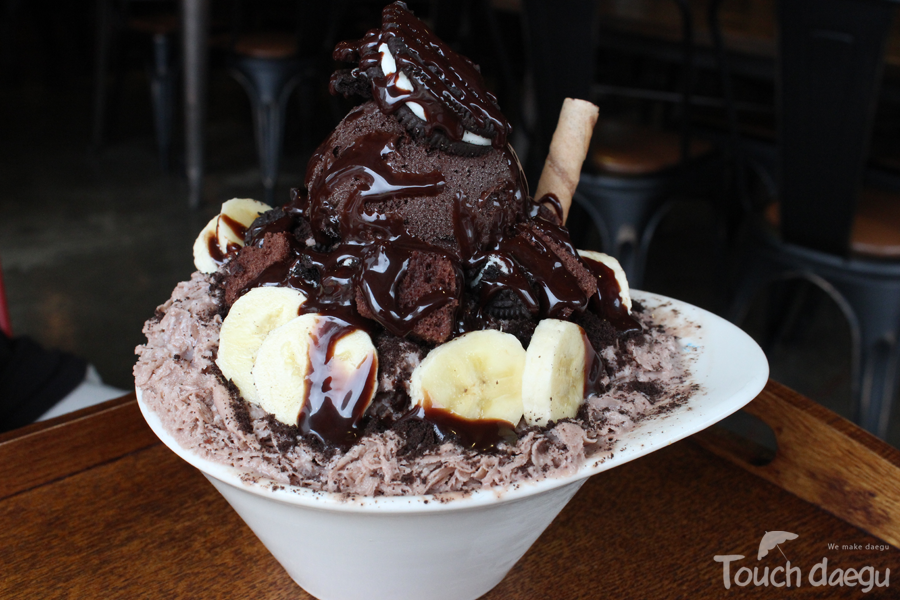 The next two shops can be found on the same street. Go out exit 10 of banwoldang station. Take your first left down a short alley with a hamburger stall on the corner. Walk to the end of the alley, and you’ll be on a street known as “cell phone street” because of the many cell phone shops located there. Turn left and continue walking straight for two minutes. You will arrive at Nunpat, a dessert café with chocolate bingsu so rich and topped with so many delicious treats that it is a must-eat stop. For just 9,000 won, you’ll get banana, chocolate sauce, brownie bites, dark chocolate ice cream, an Oreo and cookie crumbs, and a chocolate wafer cookie! If you’re not one for chocolate, you can try the traditional flavors, green tea and milk, or a delicious-looking cheesecake flavor. They have six kinds of bingsu on their menu. 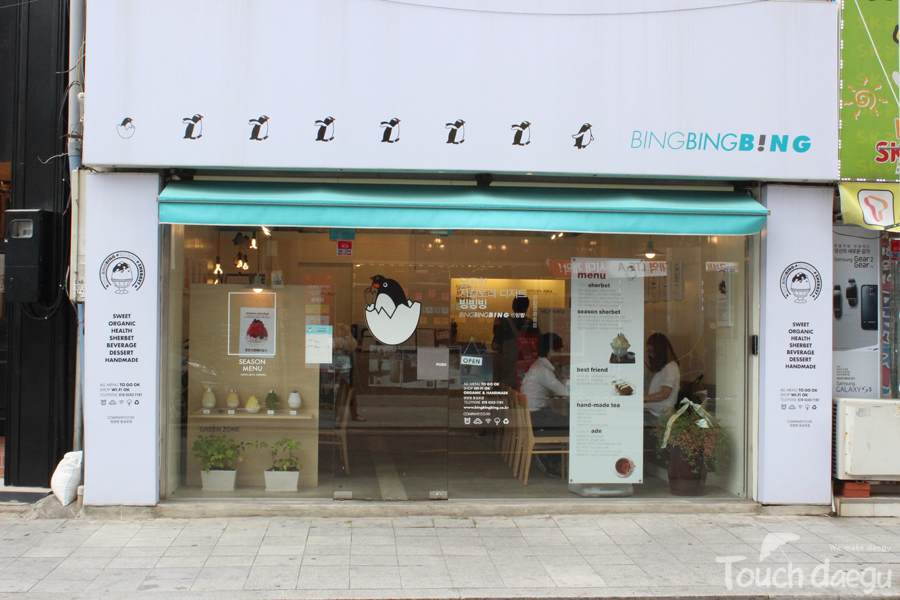 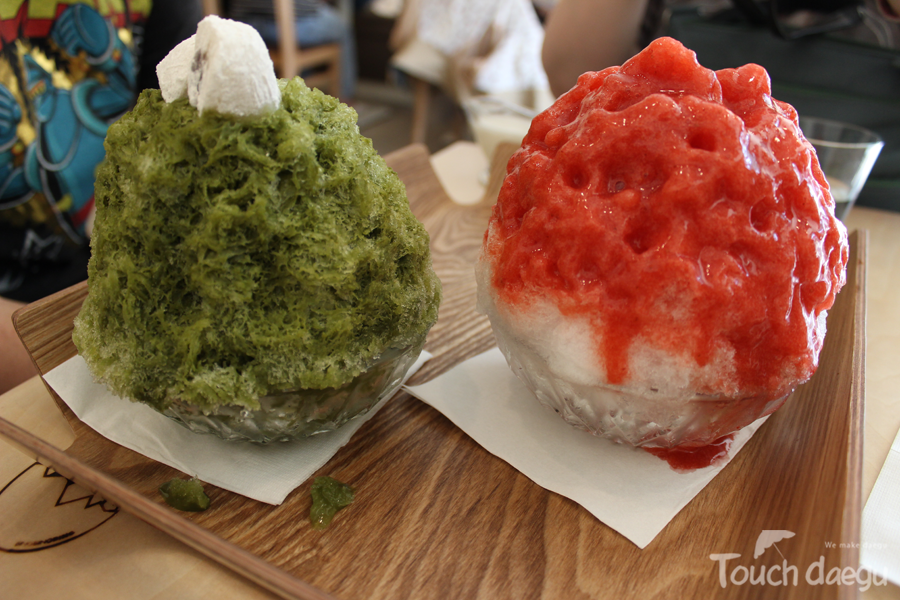 The last bingsu place is also not to be missed. Bing! Bing! Bing! is just down the street from Nunpat. Starting from Nunpat, cross the street and turn right. You will be walking back towards the alley and the banwoldang exit you started at. You’ll come upon Bing! Bing! Bing!, a white shop decorated with penguins and a light blue awning. They do sell carrot cake and a few other treats at this shop, but, as the name states, they know how to make a good bingsu. They rotate their flavors of bingsu seasonally, but not quite as much as Snolic does. Some of their flavors are quite traditional with red bean topping and condensed milk, but the ice in their bingsu almost tastes like frozen, shaved milk instead of just shaved ice because it is so light and full of flavor. Their seasonal, fresh fruit flavors are absolutely worth stopping in for. Their spring/summer strawberry flavor came overflowing with fruit puree, so they certainly don’t skimp on the toppings.

Bingsu is a true Korean dessert and the best way to beat the heat. Check out any or all of these places, and you won’t be disappointed.