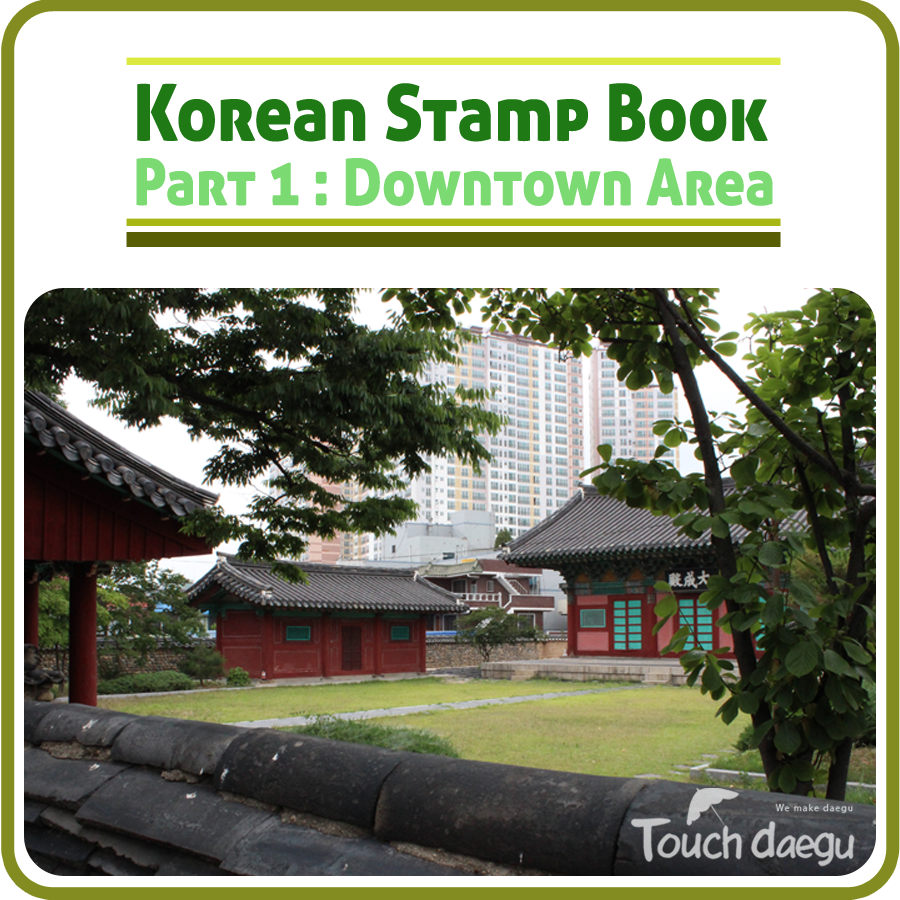 As was mentioned in previous articles about the Daegu Stamp Trail, there are two versions for you to participate in: the Korean version and the English version. While the English stamp trail only has 10 locations, the Korean trail covers those 10 locations plus 20 others.
So far, this series of posts has covered some of the locations mentioned in both books. This is the first installment in the posts about locations that are only in the Korean version of the book. There are nine locations in the orange, or downtown, section of the Korean stamp book. Four of the nine locations are also in the English stamp book and have been covered in a previous post, so they won’t be covered here. Please see this post for information about those locations: http://globaldaegu.blogspot.kr/2014/06/tour-daegu-stamp-trail-part-2-downtown.html. 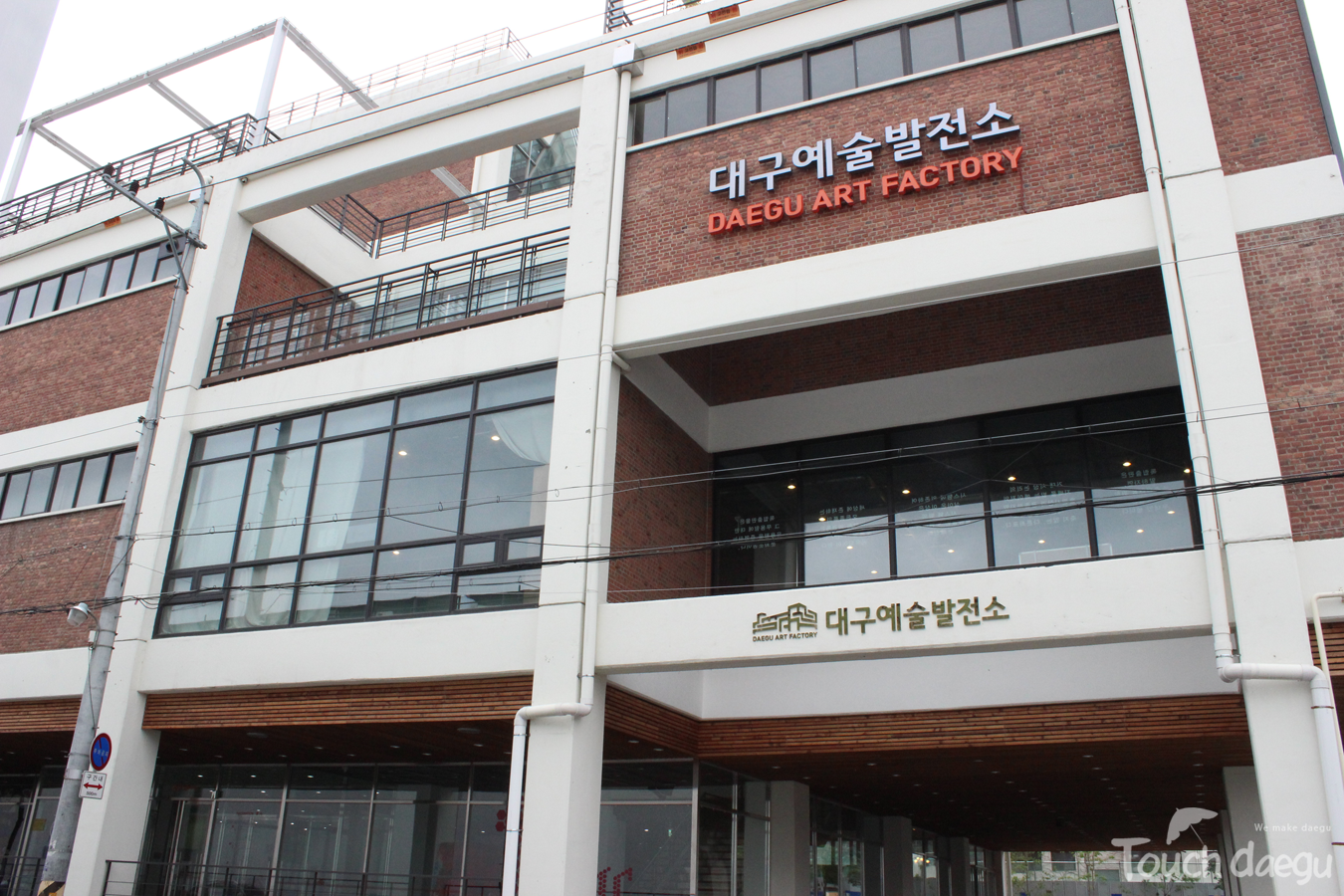 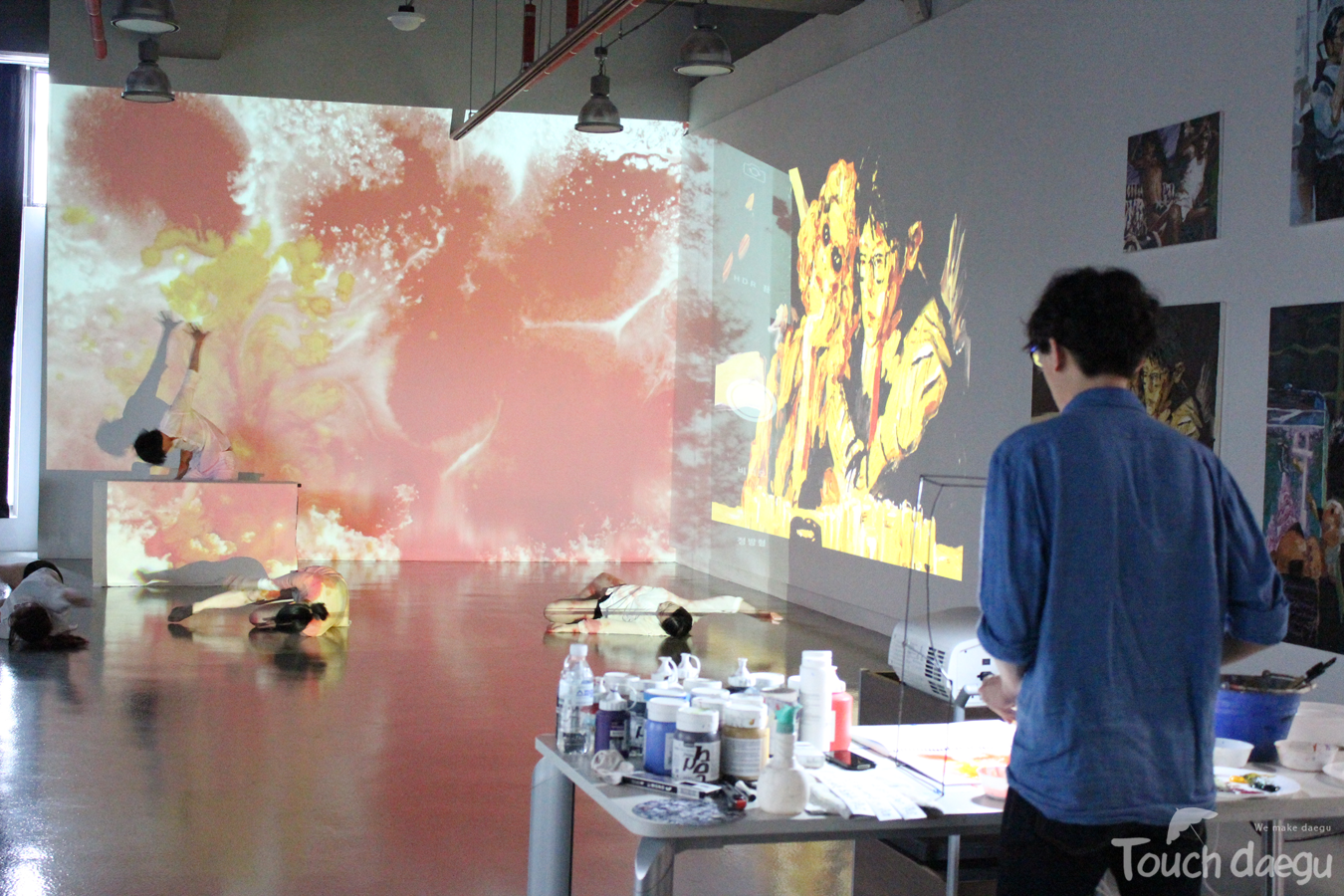 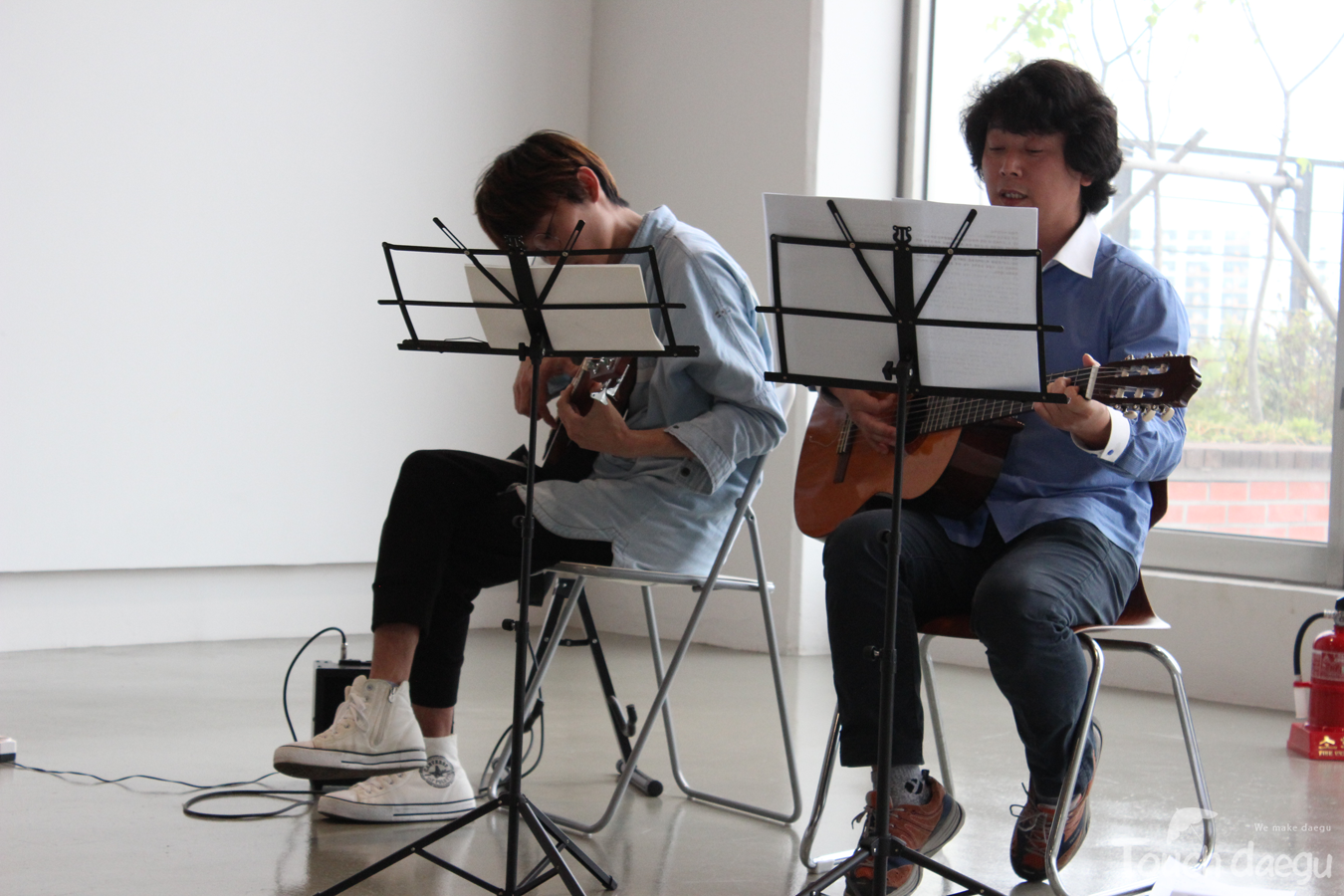 Daegu is actually an important city to the Korean art scene, and this is plain to see when you visit the Daegu Art Factory and Kim Gwang-Seok Road. The Daegu Art Factory is located to the West of Jungangno station and Daegu station. It is a large, industrial-looking building featuring many great Daegu artists. The Art Factory isn’t exactly a museum. Instead, it’s an open studio space for artists. Each different room on the fourth and fifth floors was the studio of a different artist or group of artists. 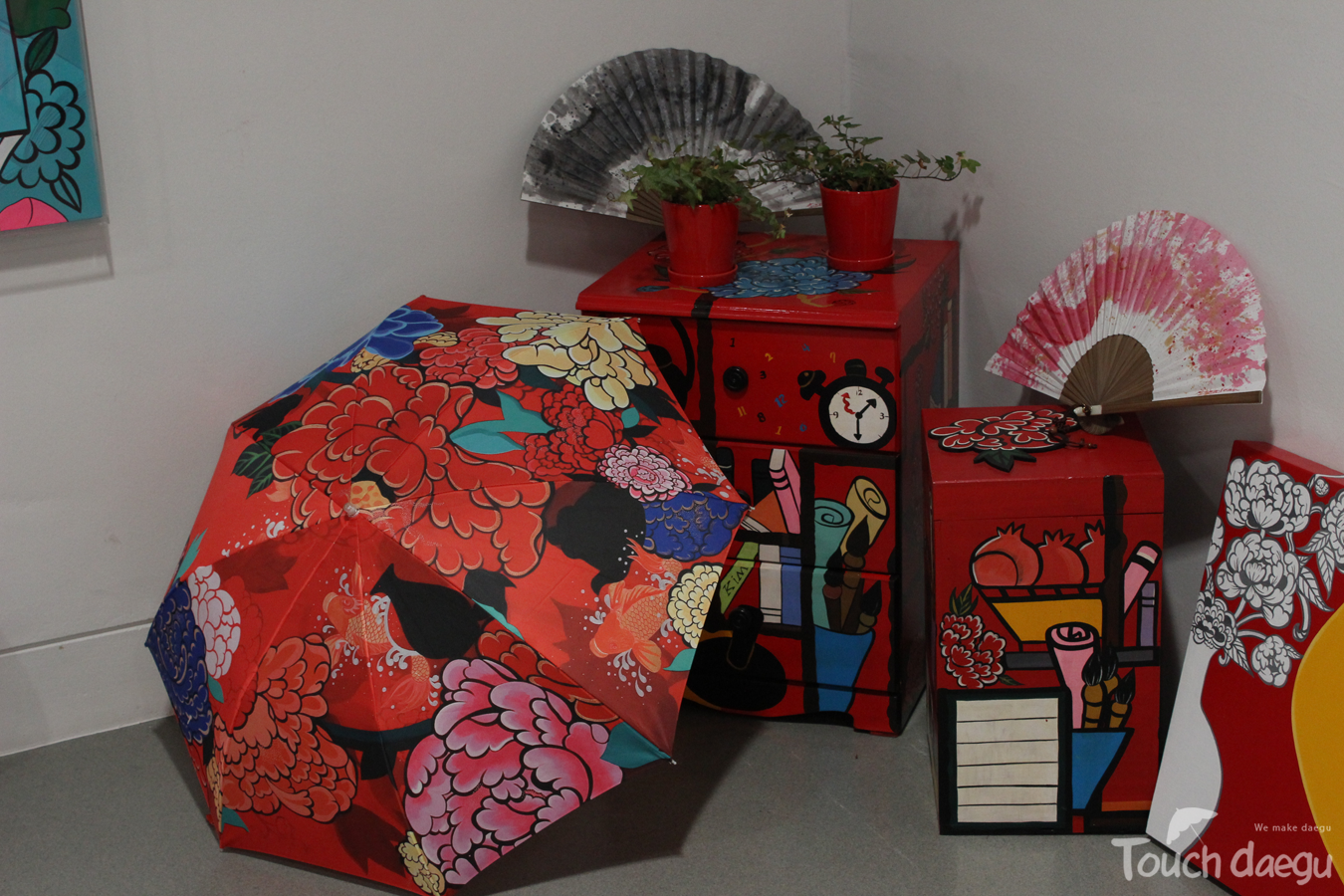 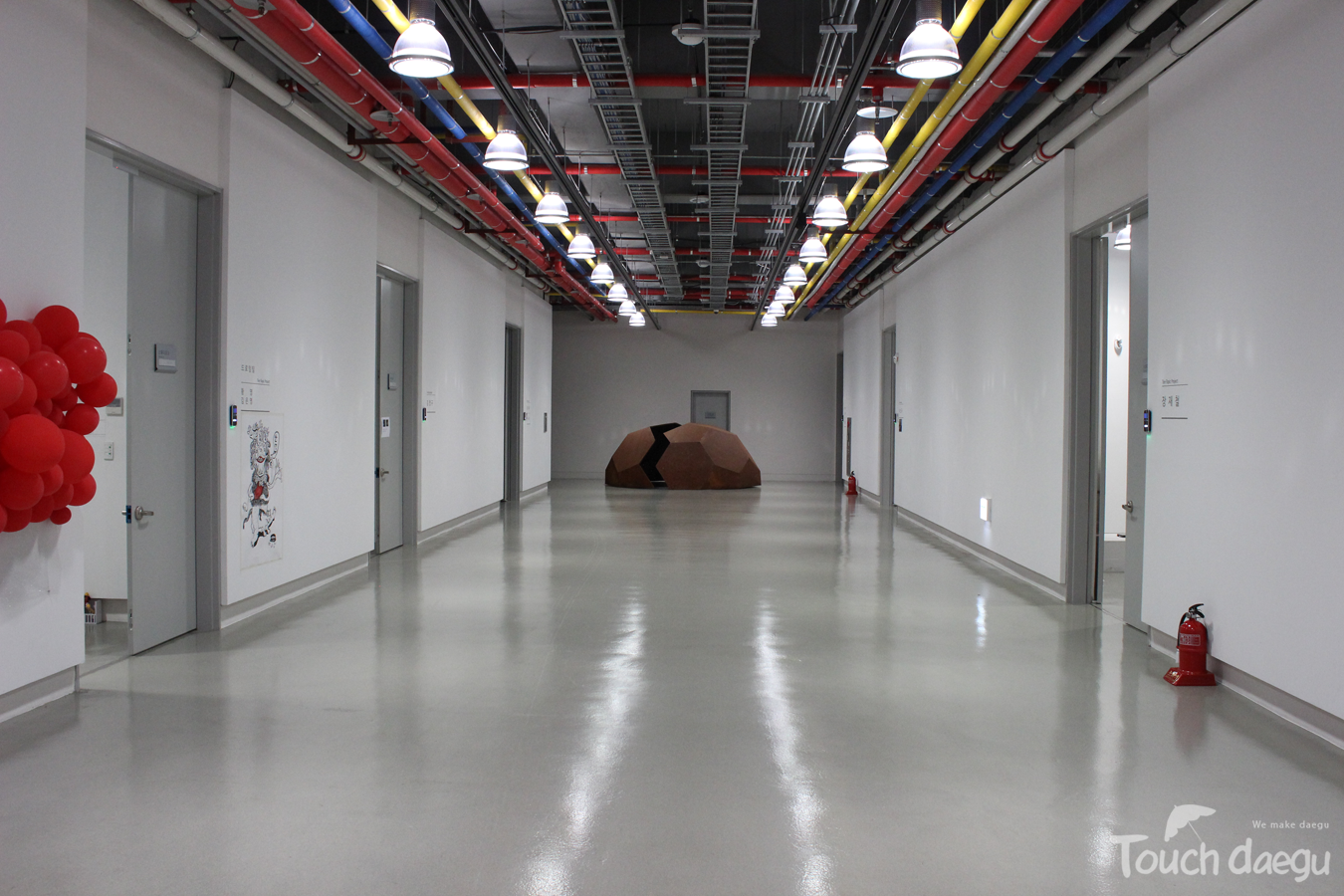 Visitors can walk in and out of the rooms, seeing a huge variety of artwork and styles. The Art Factory hosts tons of lectures, performances, and workshops. Their website has a page about current performances and exhibitions, but it may not be updates very frequently (http://www.daeguartfactory.kr/eng.action).  Instead, simply stop by the Art Factory any given weekend, especially in the afternoon, and you’ll most likely see a performance or two. 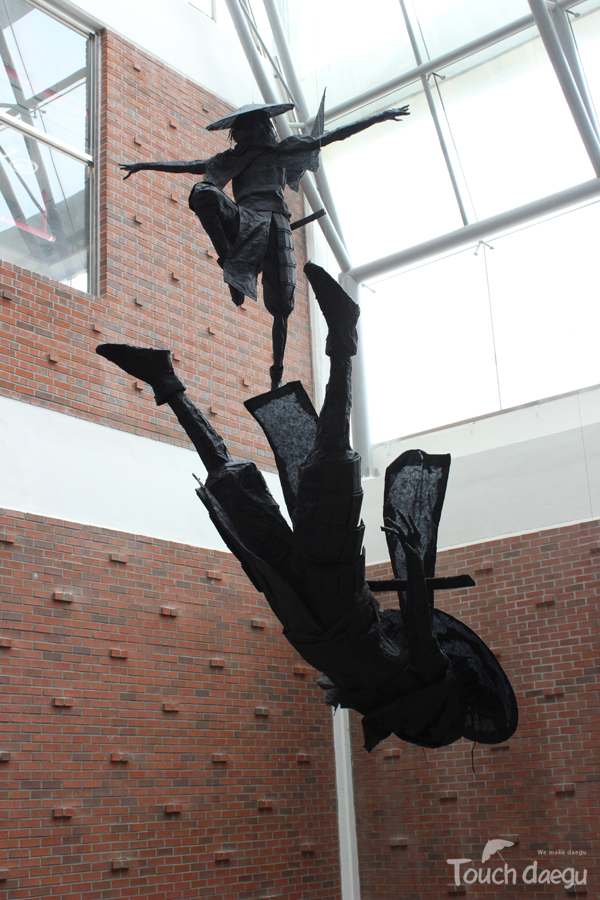 Additionally, the Art Factory has a small art book library and meeting space on the second floor and a kid’s play space and exhibit about the history of art in Daegu on the third floor. You can get your stamp at either the information desk in the lobby or at the one on the third floor. The Daegu Art Factory is a totally unique combination of a studio space and a museum, and it’s a really captivating place to visit. 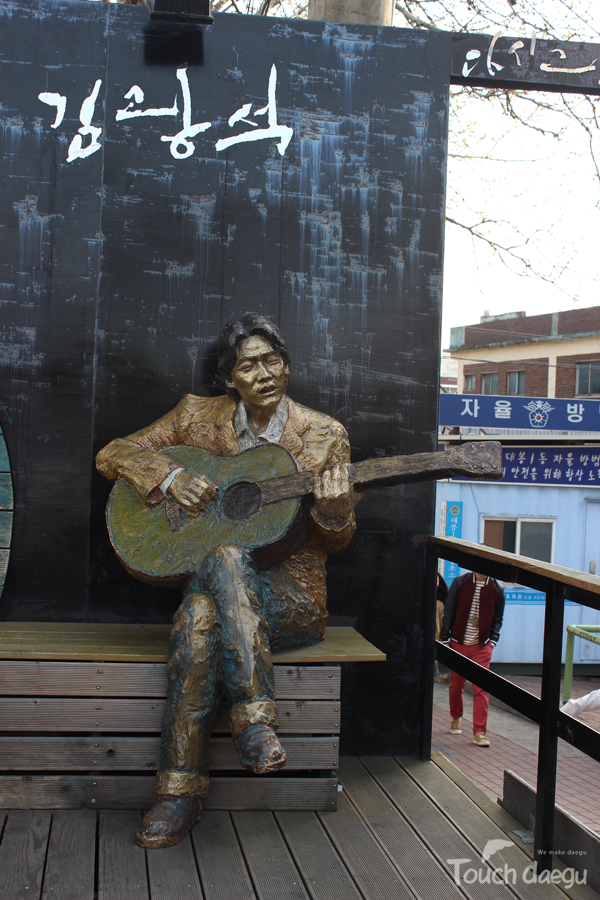 Another great place to see art in Daegu is on Kim Gwang-Seok Road. Kim Gwang-Seok was a Korean folk rock singer who gained wide popularity amongst young people in the early 1990’s. Unfortunately, he committed suicide in 1996. Because he grew up in Daegu, the city wanted to honor him by dedicating a street to him. 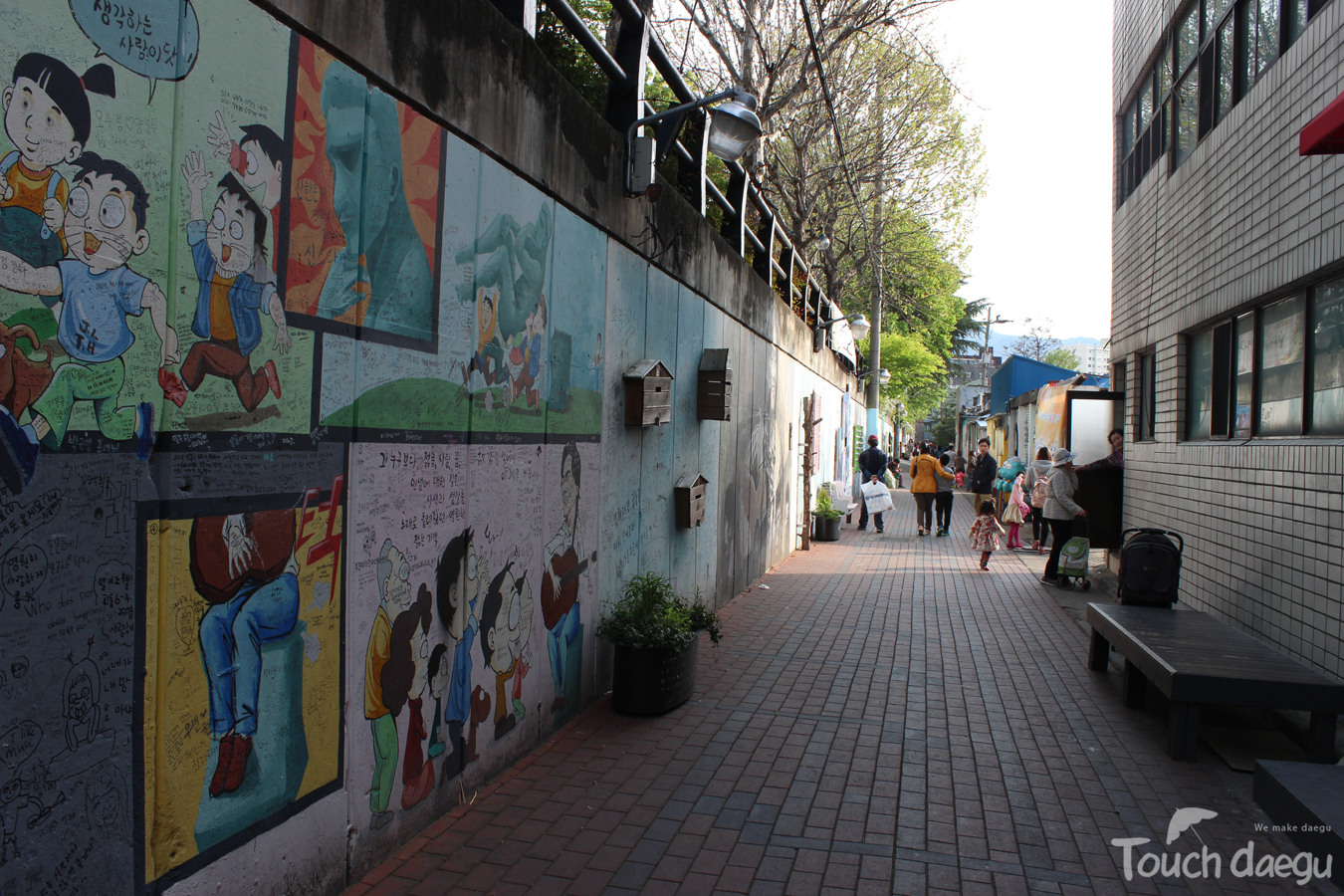 It is a walking street downtown just south of Kyungpook National University station on the green line and before crossing over the river. You’ll know the street because there are gold statues of Kim Gwang-Seok singing and playing guitar while sitting on a bench at either end of it. There is a wall on one side of the street, and it is lined with murals and artwork, all featuring Kim Gwang-Seok. There are lots of small music venues on the street, and during the day, local artists sell their wares by the murals. The stamp booth for this location is a bit hard to find. If you walk about halfway down the street with the murals and turn right, the stamp place is inside a light tan building that looks like a store-front on your left. It might be easier just to point at the stamp location (the bottom box on the second column) in the Korean stamp book page for Kim Gwang-Seok Road and say, “audi ay yo?” to one of the artists vendors. That means, “where is it,” in Korean, and the people who work in that area should know the place and be able to help. It is a place that exudes creativity. It is clear that Kim Gwang-Seok influenced and was loved by many despite his short life. 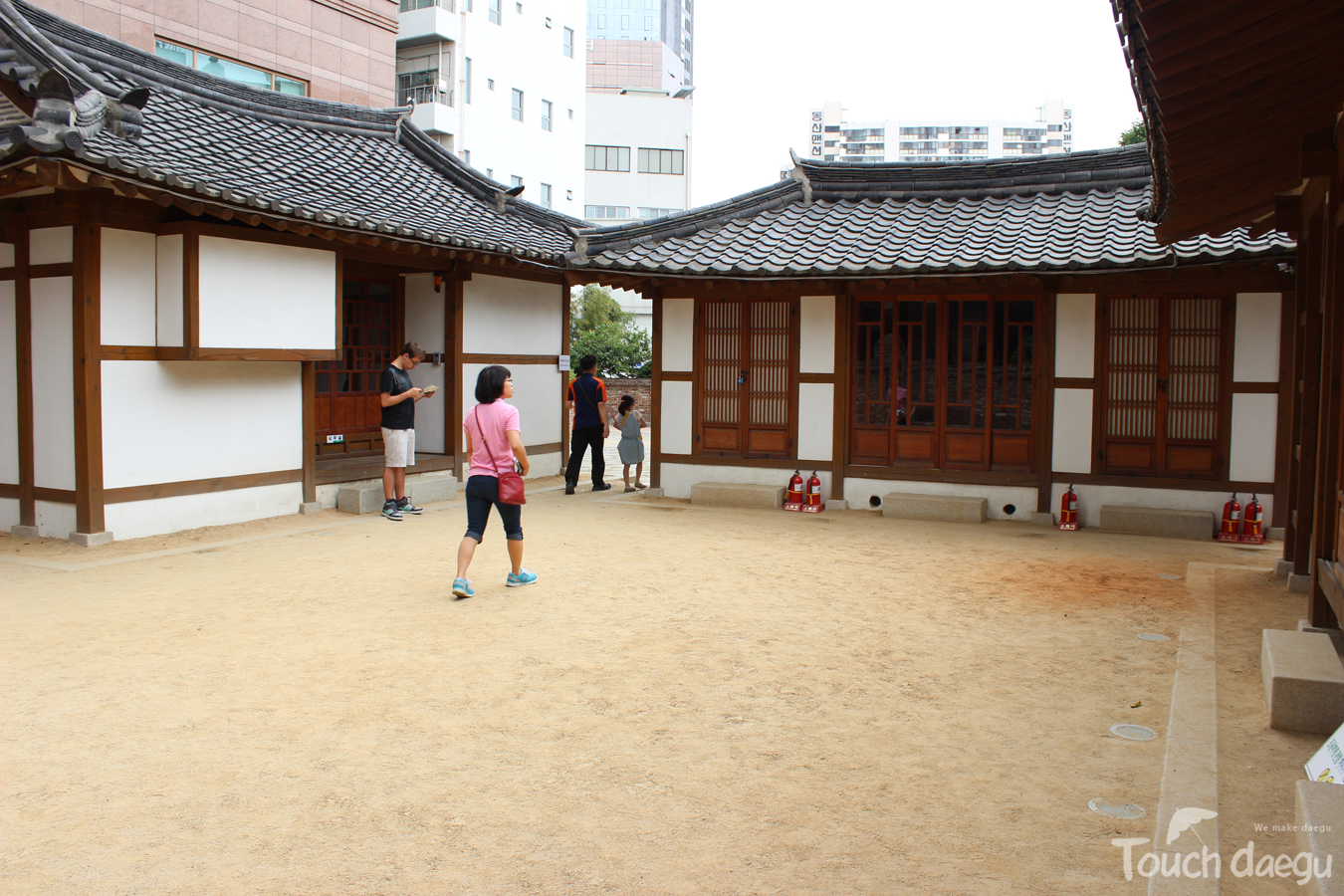 The Old Residence of Lee Sang-Hwa is an excellent bridge between the history of art in Daegu as well as traditional Korean culture. 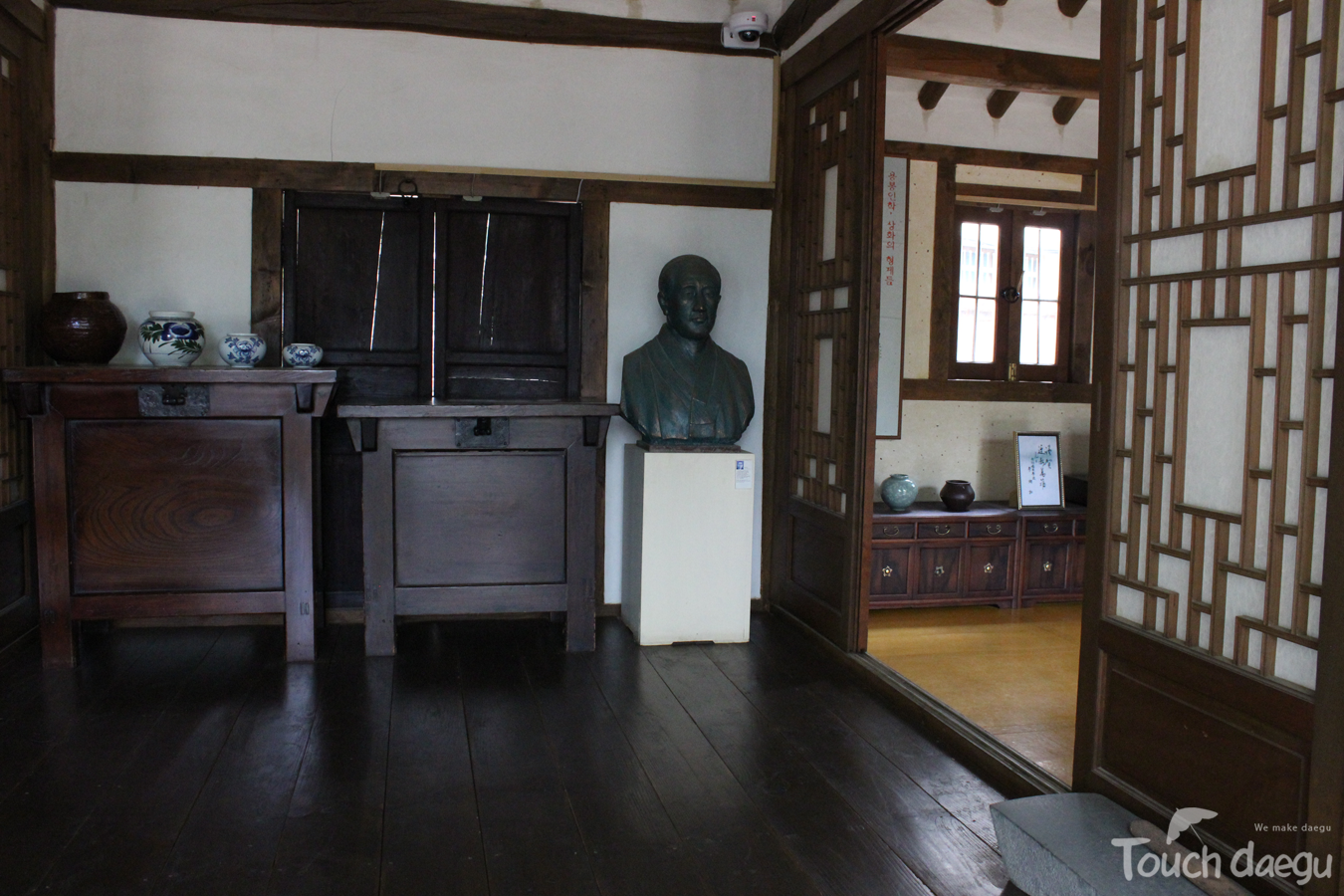 Lee Sang-Hwa is a famous Korean poet who wrote many inspirational poems about life during the Japanese Occupation of Korea that took place between 1910 and 1945. 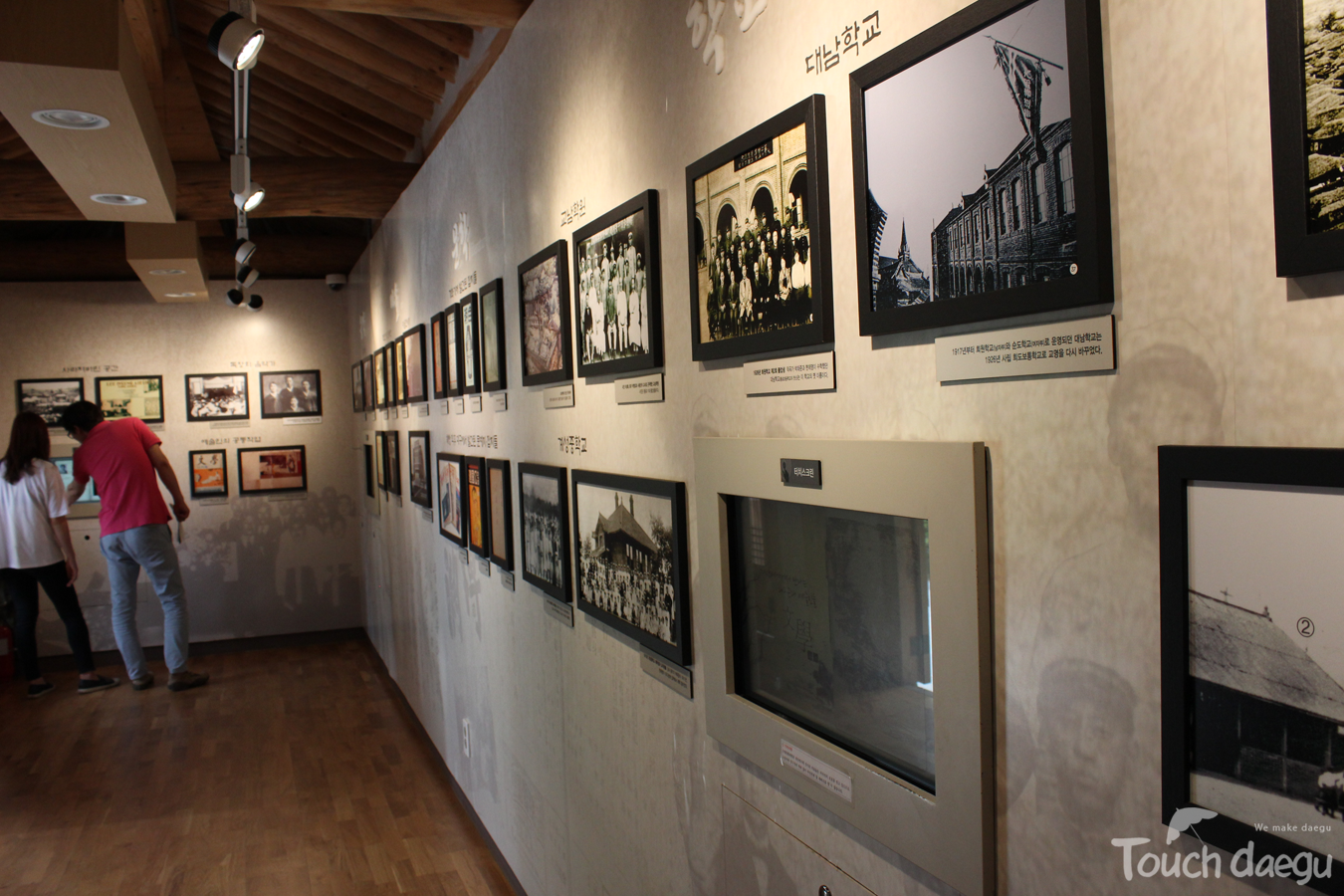 He was active resistance movement in Daegu and owned the traditional Korean-style home that has been preserved downtown. Traditional Korean homes, or hanoks, are, typically, white with some brown wood exposed and black, curved roves. They are short in height but long in width. There aren’t really any walls to divide the various rooms, but they are treated as different rooms nonetheless. 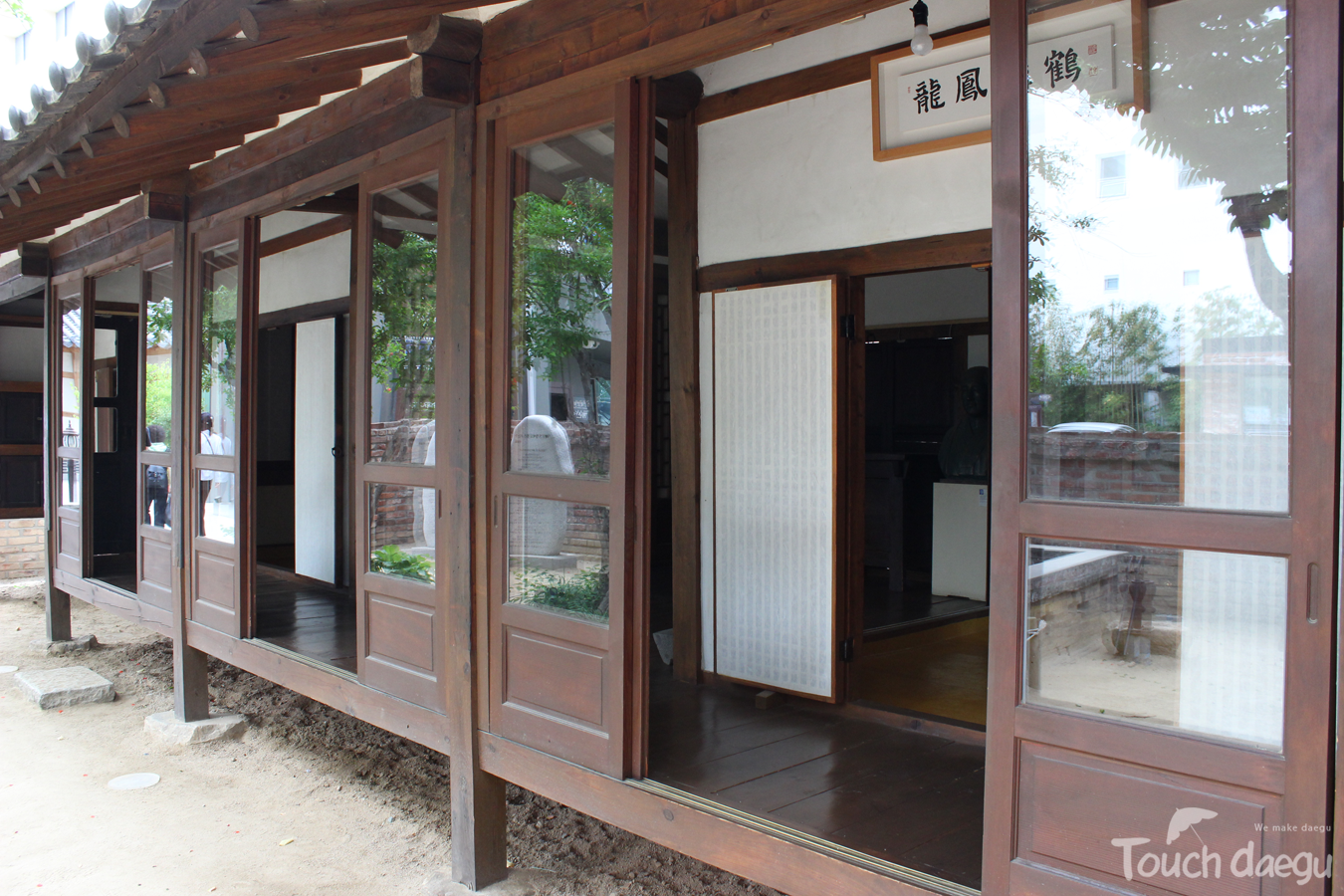 The houses can sometimes consist of a few of these buildings, instead of just one very long one. In this case, Lee Sang-Hwa had two buildings. One seemed to be more of a living space with three rooms, and the other was his one-room study and work area. 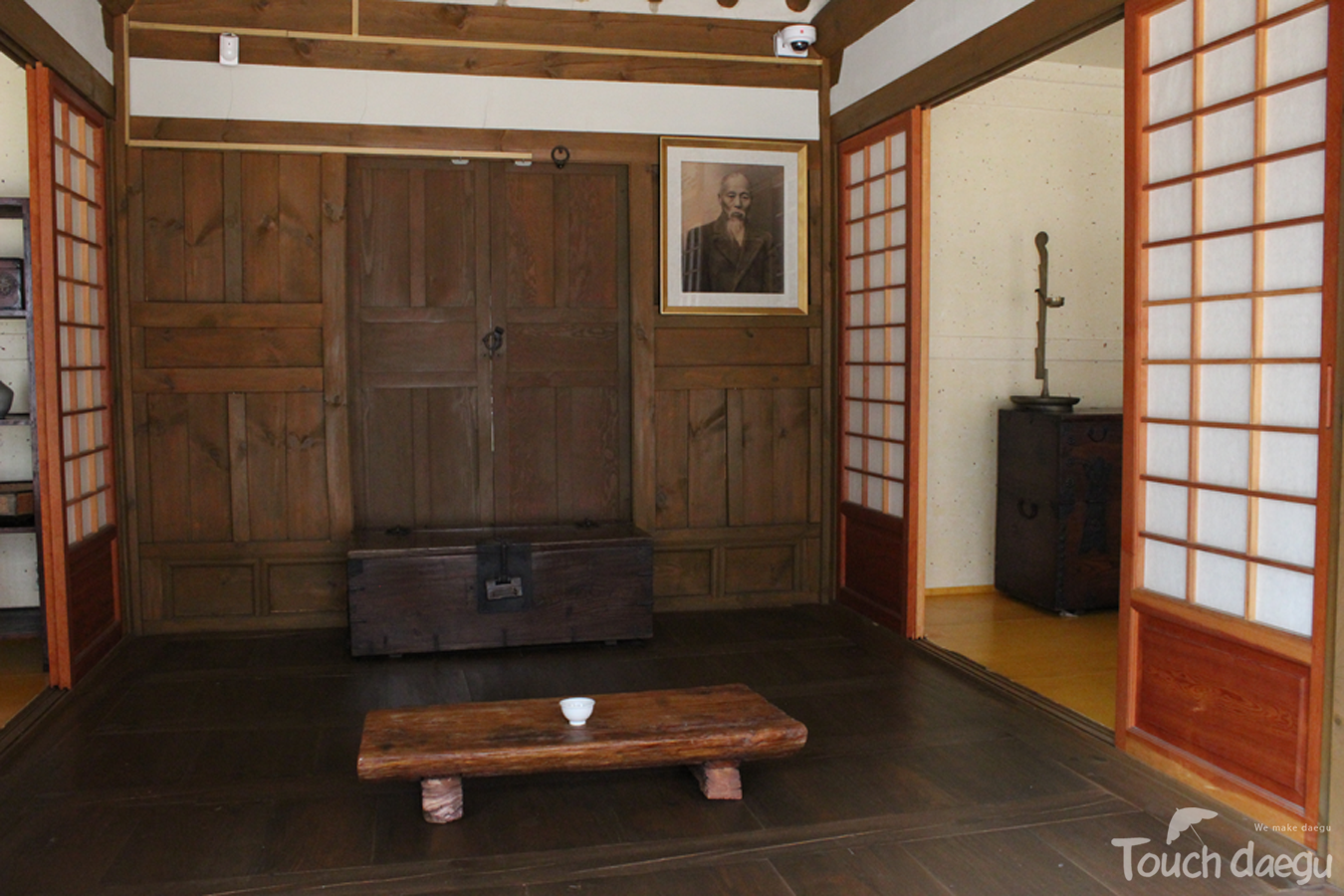 Just next-door is the residence of Seo Sang-Don, another man active in the resistance against Japan but in a vastly different capacity. Seo Sang-Don worked in business and finance. He started the National Debt Repayment Movement in an effort to relieve the country’s debt and gain independence from Japan. Like Lee Sang-Hwa’s home next door, Seo Sang-Don had a traditional Korean home. The stamp booth for the residences is right next to the homes themselves, and it’s not hard to spot. If the staff member isn’t in the booth, she or he might be speaking with someone inside the residence nearby. They wear a uniform, so they aren’t hard to spot. Both of these homes are right in the middle of the city. There are huge skyscrapers all around, making these homes seem strange in today’s modern Korea. 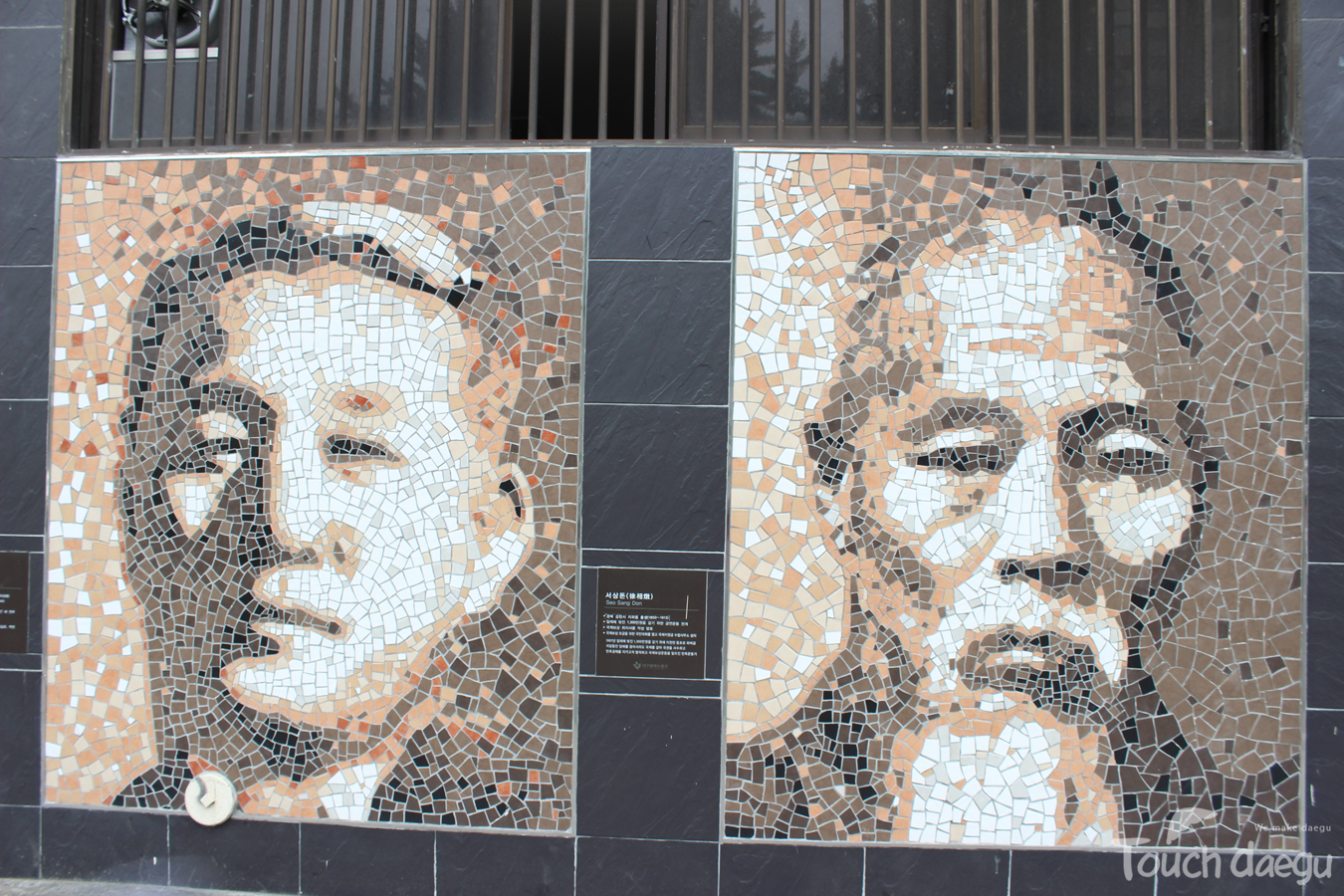 Still, they stand as monuments to two important men who vastly impacted the rich history of Daegu. Both residences are very close to the Herb Medicine Museum behind Hyundai Department Store. 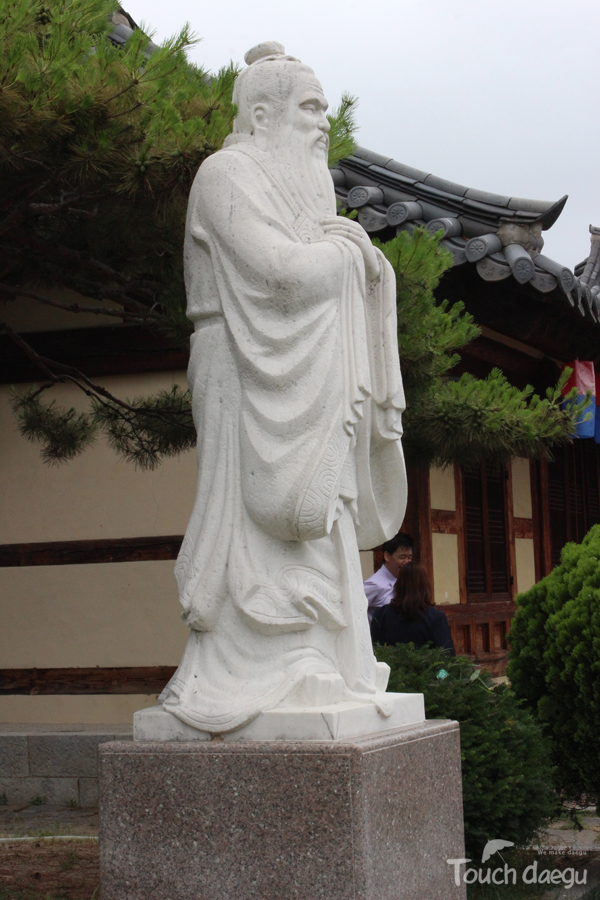 Confucianism flourished in Korea during the Joseon Dynasty. Daegu Hyanggyo Confucian Academy has been in existence since 1398. It was burned down in an invasion by the Japanese in 1592 but was rebuilt soon after. It was moved between two locations in Daegu after, but was moved back to its original location in 1932. 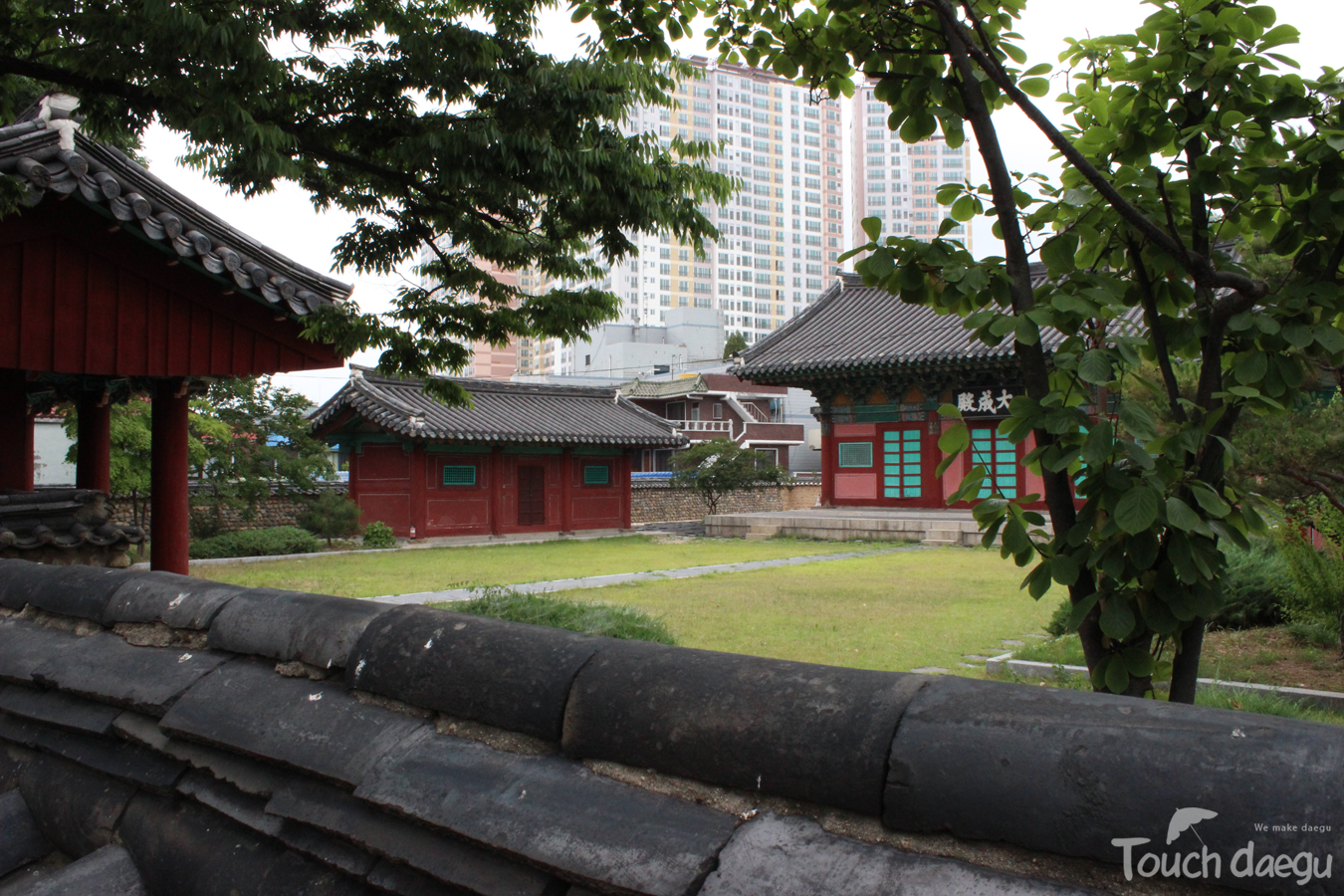 The two most important buildings at Hyanggyo are Myeongyundang, the lecture hall, and Daeseongjeon, the Confucian shrine hall. The stamp location is right inside the academy, just walk up the steps, and it will be on your left. Be aware that traditional Korean weddings are held there on the weekend. You can still look around, but you might feel a bit awkward amongst a crowd of dressed-up Korean people. Daegu Hyanggyo Confucian Academy is a great place to learn about the history of Daegu and a very important aspect of Asian culture in general. 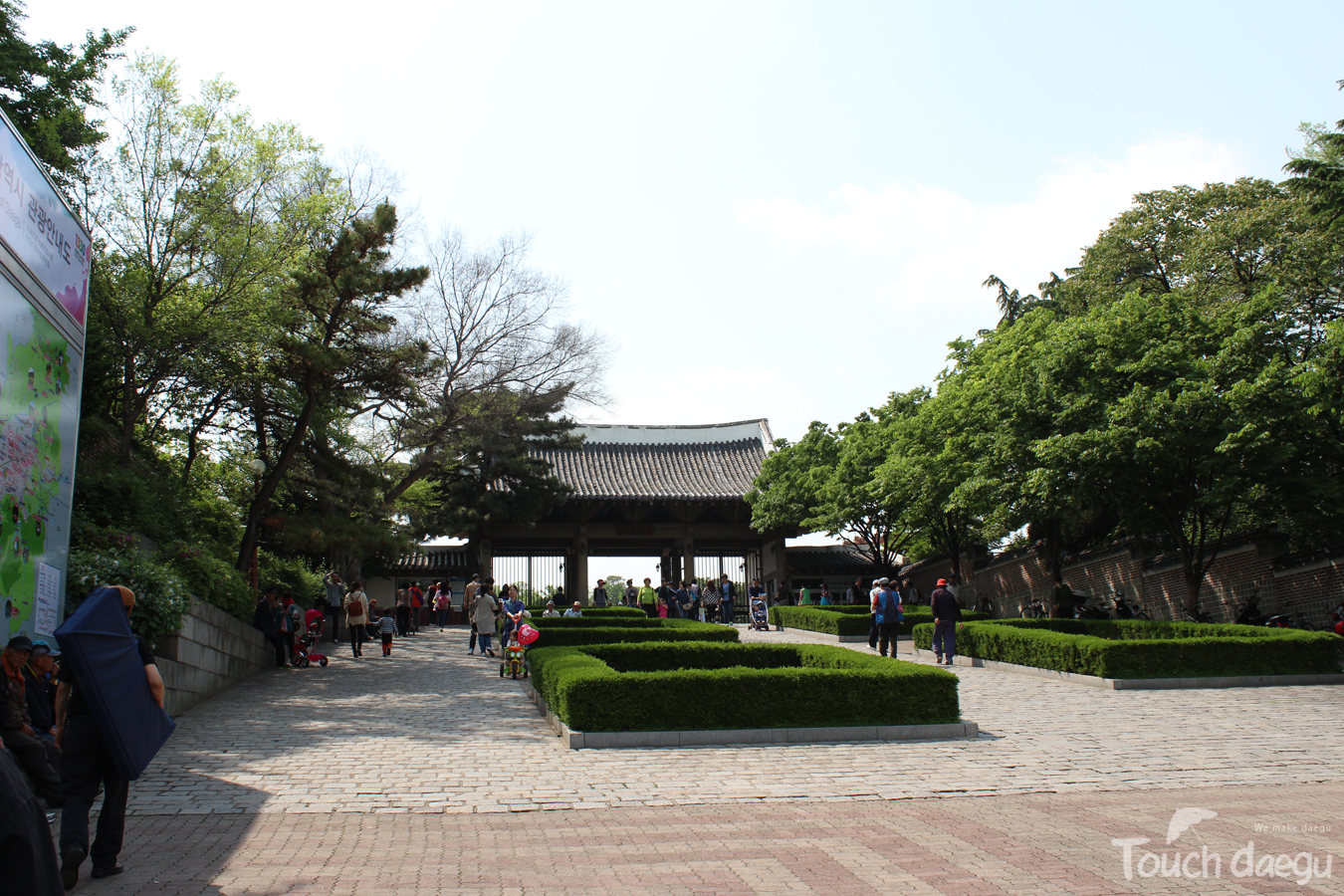 The last stop in the downtown section of the Korean stamp book is Dalseong Park. Dalseong Park is about a 10-minute walk from seomun market. It is the oldest park in Daegu, created in 1905. During the Three Kingdoms Period, it was a fortress, and it later served as a Japanese military base during the Sino-Japanese War. Dalseong Park has wonderfully manicured plants and shrubbery to enjoy. You can stroll down the serene walking trails all over the park. You can get your stamp for this location from the attendant at the main gate. 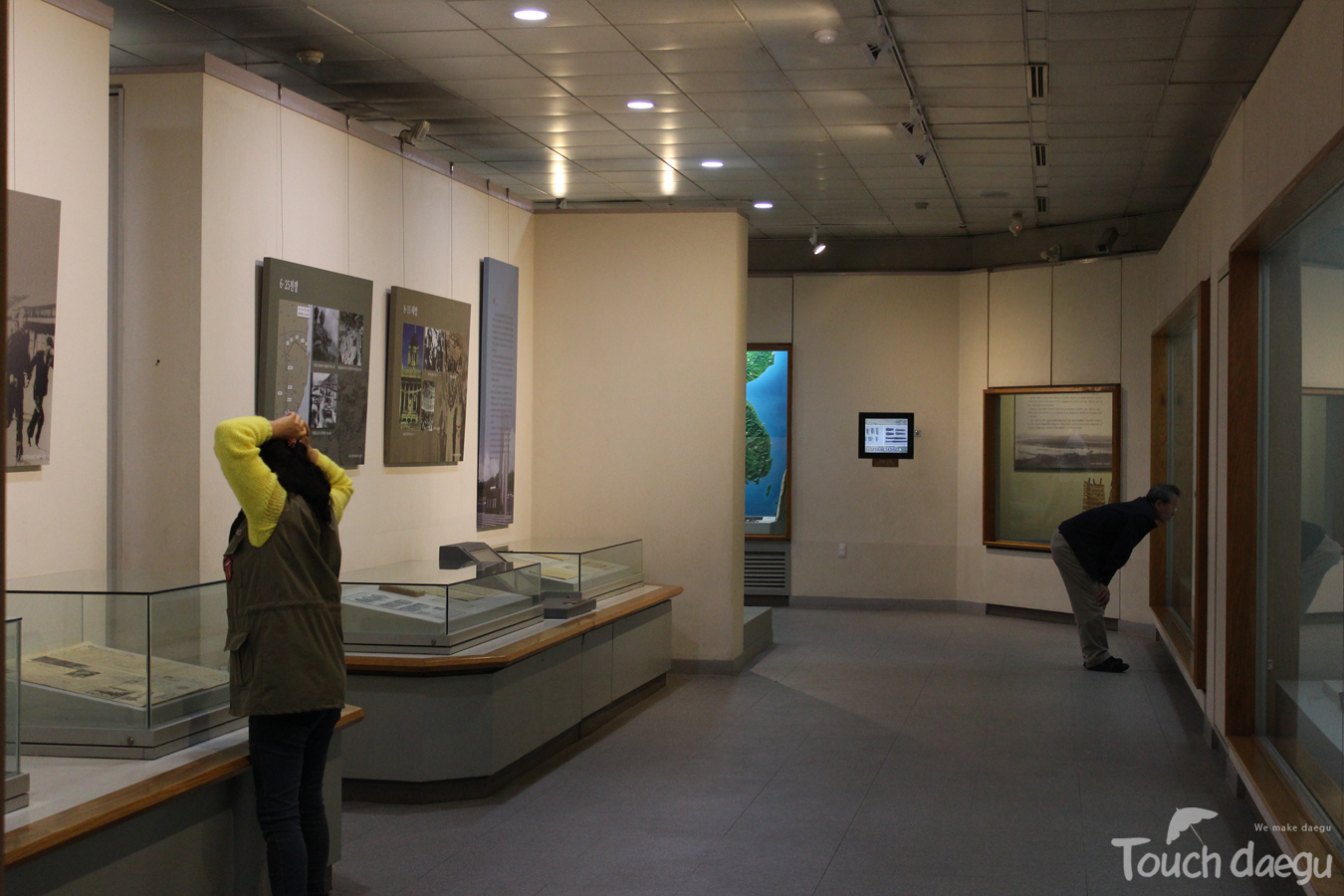 There is a one-room museum in a building to the left of the gate. Most of the information is in Korean, but there are some nice pictures showing the evolution of the city of Daegu. Dalseong Park is a nice place to relax and get away from the city without actually leaving it.

The Korean downtown stamp trail emphasizes the importance of art in Daegu and brings people to historically important locations in the city. Stay tuned for the third and final post about the English stamp trail.