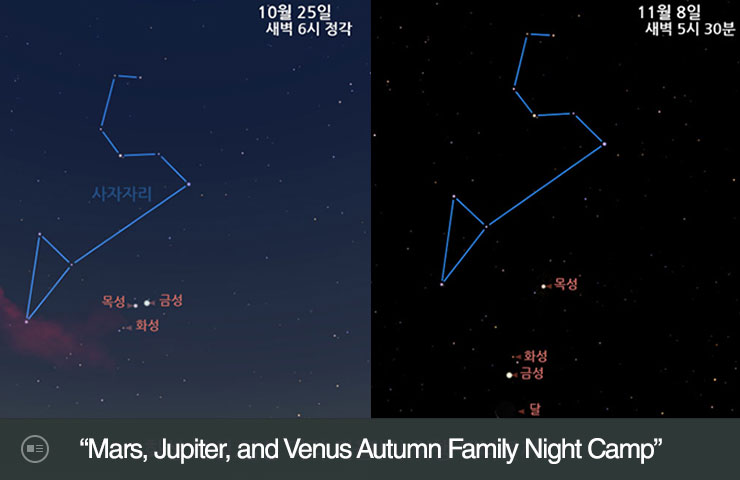 Daegu National Science Museum, “Mars, Jupiter, and Venus Autumn Family Night Camp” is opening in two sessions, on 24 to 25 October and 7 to 8 November.

In this camp, which is held at Cheonjiin Institute, an astronomical accommodation, lectures  on astronomical observation and experience programs such as astronomical telescope operations and provides hands-on, drone robot kits, and you can experience cutting-edge science and astronomical sciences industry at the same time. In addition, the career exploration lectures, which receive fervent high response, suggest the direction for the education of their children to the parents who participated in the camp through lectures and discussions, and will enhance the satisfaction of the family participants.

In this camp, the Mars, the Jupiter and the Venus can be observed at the same time, adding to its uniqueness. In Daegu National Science Museum’s astronomical observatory station, the 200㎜ major telescope and the 400㎜ astronomy lab that conducted utilizing the reflecting telescope and the telescope practice, you can enjoy cosmic autumn night shows which are normally difficult to see. In addition, while these planets seldom get so close to each other, Mars, Jupiter, Venus approached to look up to each other at the same time October 25, offering a spectacular sight in binoculars. On November 8th, there will be a great opportunity to observe the crescent in addition to the three planets, the scene difficult to see this scene again in your life.