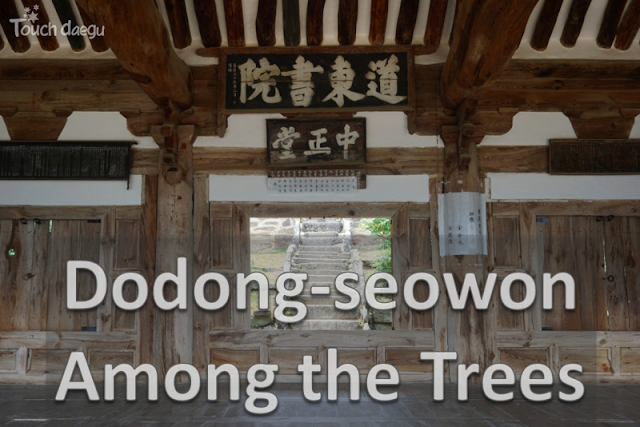 Dodong-seowon (Confucian academy) is in one of Daegu’s most far-flung corners. It’s hours from the city’s major tourism areas like Dongseongno and Suseong and is snuggled against the Nakdong River along Daegu’s border with Gyeongsang-do. So needless to say, it took five years of trying before I finally got there. But it was worth it. 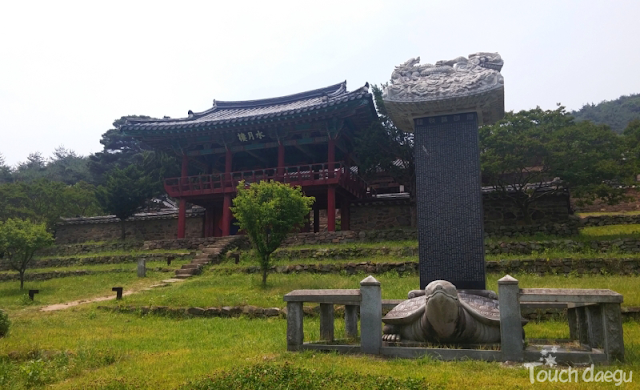 A little history: Dodong-seowon is built to honor Kim Goeng-pil, a great sage of the Joseon Dynasty. The original seowon was built to the east of Biseulsan, but it was destroyed during the Imjin War with Japan in the 16th century. The seowon’s resident scholars moved to Dodong-seowon’s current location, several kilometers away but still close to Biseulsan. The seowon was one of few that survived efforts to reform or demolish the Confucian academies of Joseon in the 19th century.

Upon arriving, I walked directly to the pavilion at the seowon’s main gate, passing under a 400-year-old gingko tree that seemed large enough to shade half of Daegu. The pavilion is the traditional Korean style, red-painted wood and green highlights topped with a gray tile roof. Stone walls stretch along the perimeter of the seowon. 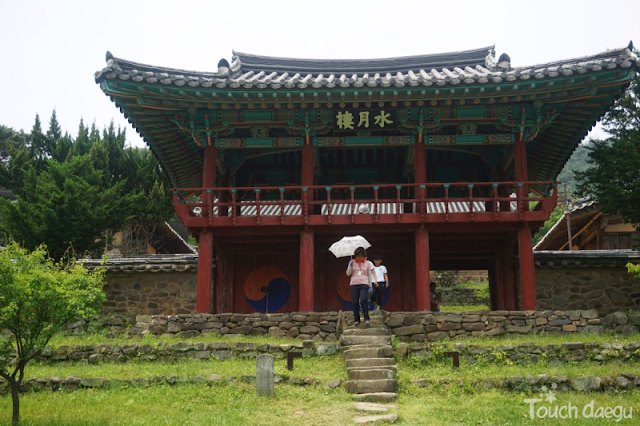 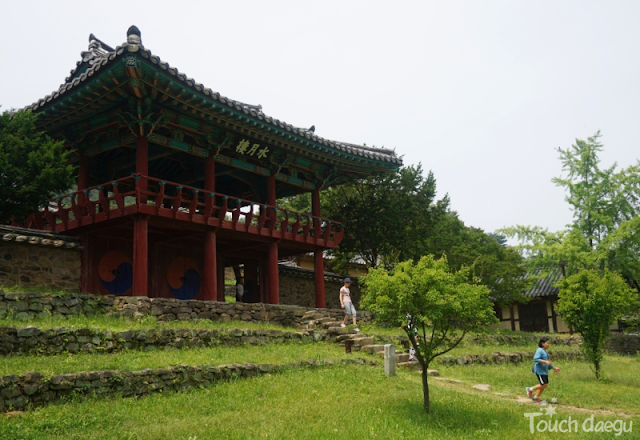 And that’s all interesting and such, but Dodong-seowon’s real appeal is the nature around it. With Biseulsan creeping down behind it and the Nakdong River rolling along nearby, the seowon is awash with the sound of rustling leaves and birds making a fuss in the trees.

I grew up in rural West Virginia, far from any cities, so I was drawn away from the seowon itself and into the greenery around it. The seowon’s building seemed almost incidental to a visit to the seowon, go figure. 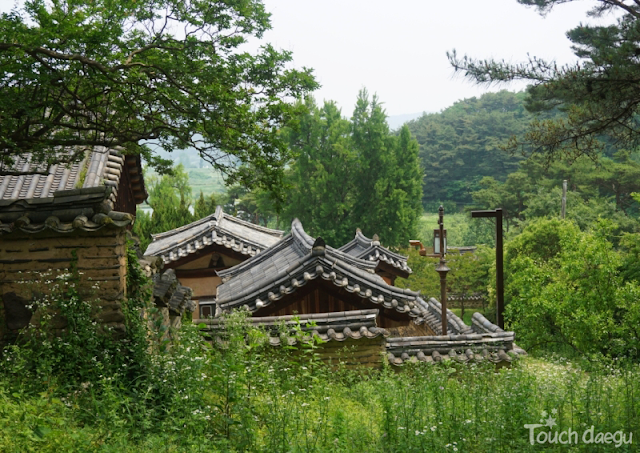 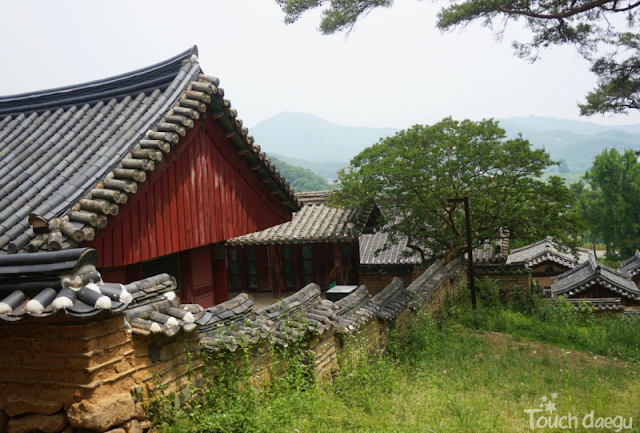 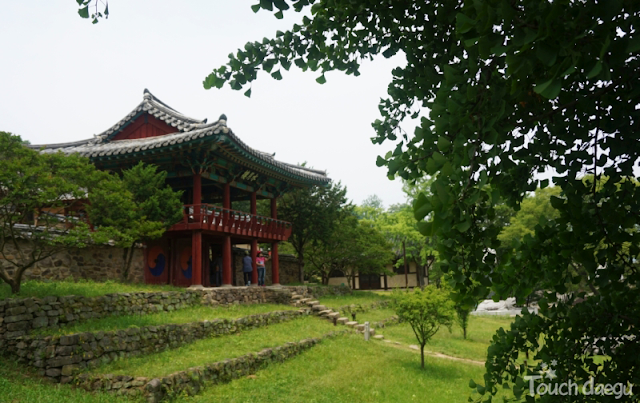 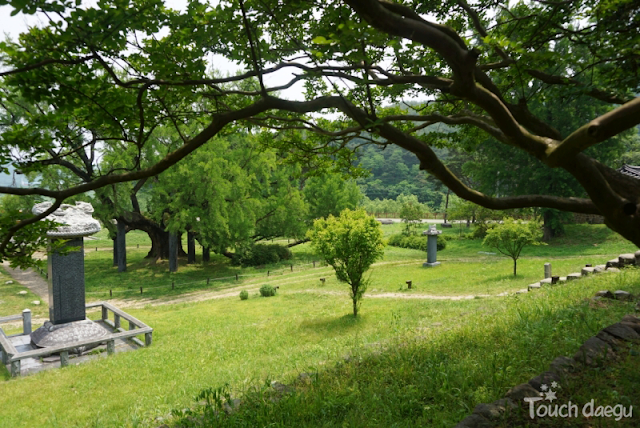 I must admit to being sorely tempted to strike out through the forest and see where that trail went. But then I’d miss my bus. 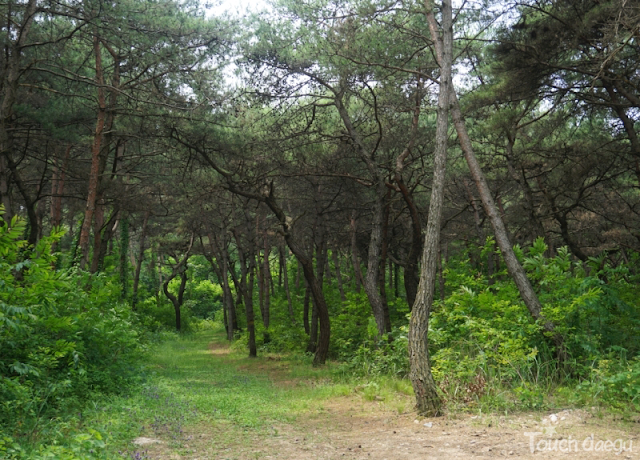 Anyway, Dodong-seowon itself is no slouch when it comes to nice scenery. Most of the other tour bus passengers had gone off to sit under the gingko tree and hide from the morning sun, so I had all the inner halls and shrines to myself.

We usually think of temples and shrines as being a little dusty and not very engaging, but if you look closely you’ll see they kinda celebrate life with all their colors and attention to workmanship and design. 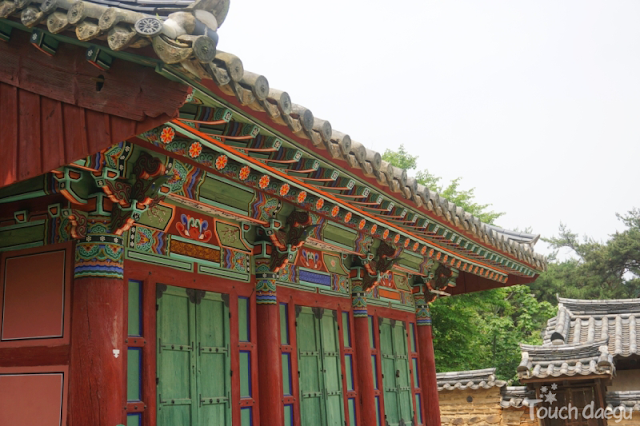 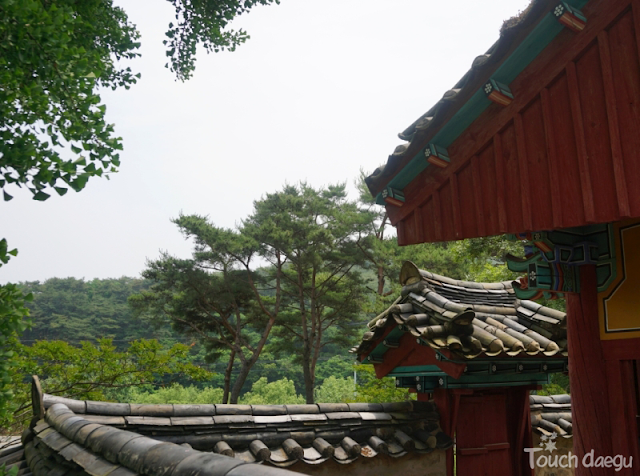 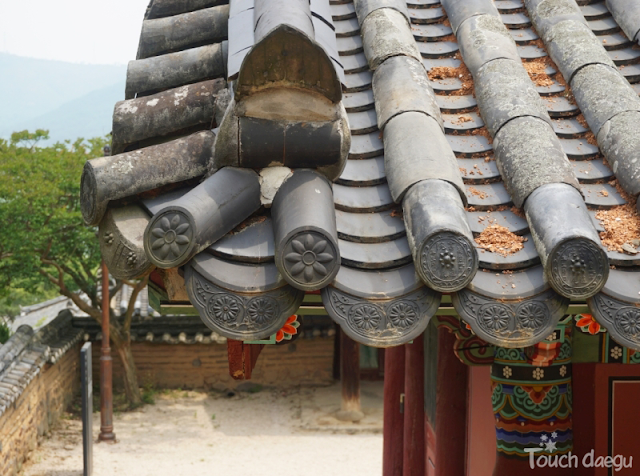 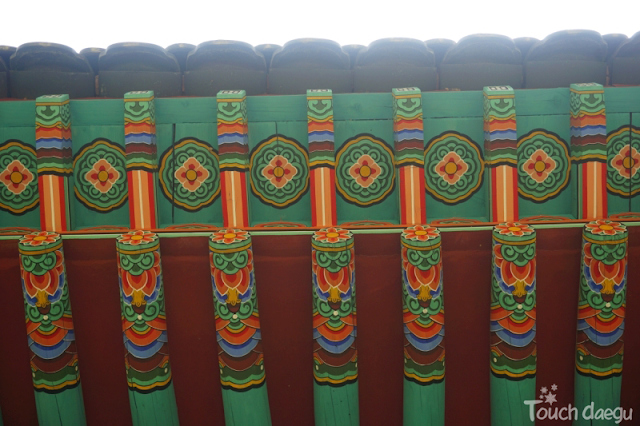 I especially liked taking a close look at the way timbers were fit together in a careful manner that made nails and hammers obsolete. The pieces were put together and left for gravity to ensure. If I had a thousand years to come up with idea like this I’d still be at a loss. And I studied architecture a bit in college! 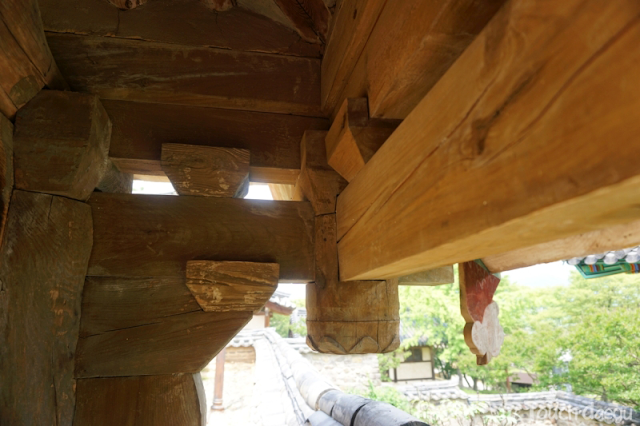 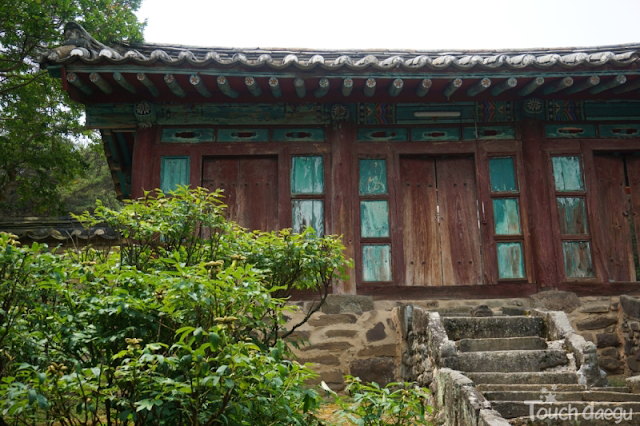 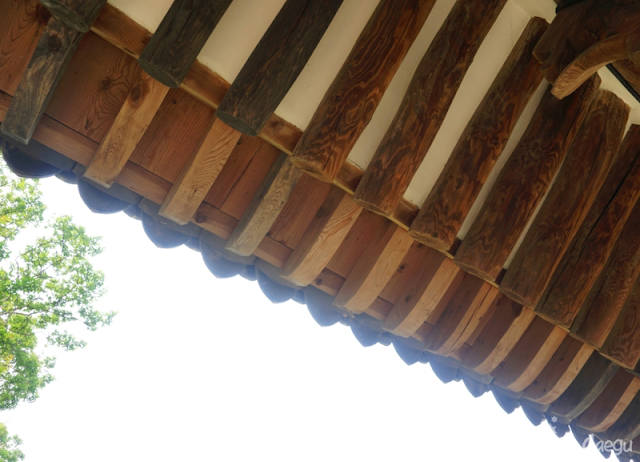 I was sorely reluctant to leave Dodong-seowon. The cuckoos and woodpeckers in the woods, the lush greenness of the hills and the fresh air sweeping across the field made all the effort to get there worthwhile. Nevertheless, the tour bus waits for no man, so I hustled down the hill to get on and go to the next stop. 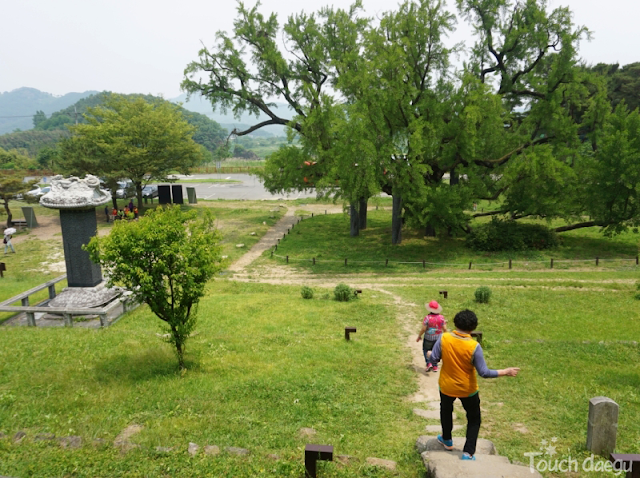 Oh, and I got a stamp for the Daegu City Stamp Trail. This is my sixth year participating on the tour, and my very first time to get a Dodong-seowon stamp! I’m quite pleased with myself. 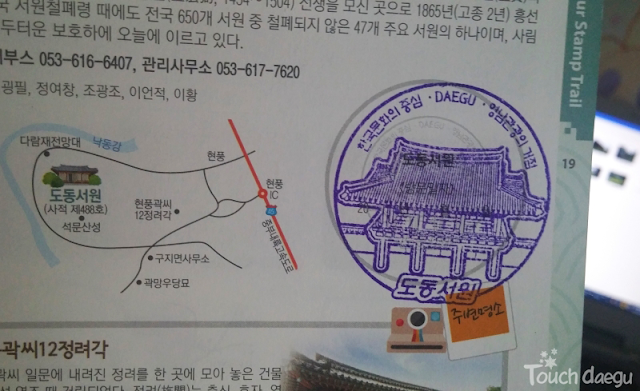 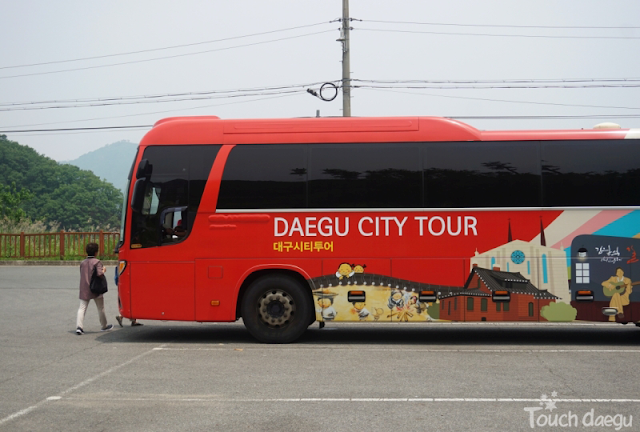 Now, as for getting to Dodong-seowon…good luck! I wouldn’t ever try to discourage someone from going there, but without a car you’re looking at several hours of bus travel – if you’re lucky enough to get the right connections!

However, if you find yourself with a free day on Tuesday or Friday, the Daegu City Tour Bus goes on a Biseulsan course that includes Dodong-seowon, the National Science Museum and Biseulsan itself. That’s the only chance I had to get to Dodong-seowon, and I finally had the right timing to get there.

Good luck getting there, and definitely get there if you can!