Daegu is one of the biggest cities in Korea. You can see so many big buildings and many people in Daegu. But the interesting thing is there are still many places you can learn about modern time in Daegu and they make a good harmony. Do you want to be a time traveler? Let’s explore Modern Daegu with Alley tour. 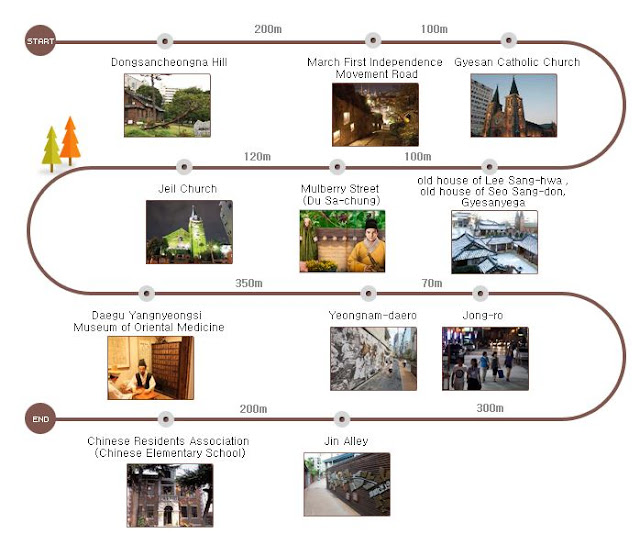 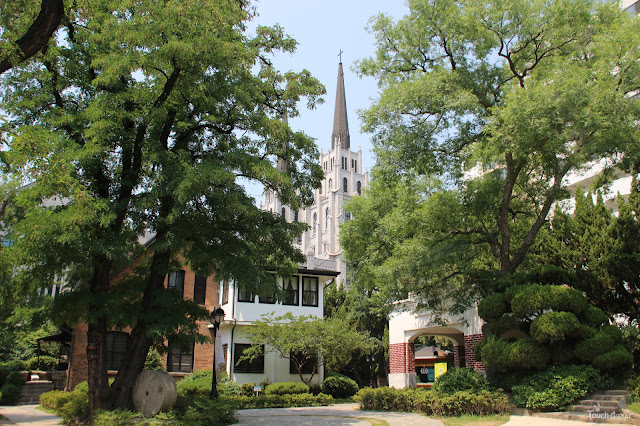 Cheongna hill is a symbol of Christianity of current Dongsan Medical Center.

There is a song mentioned about this hill: ‘Thinking of My Friend’. This is a song sung by Park Tae-jun, a modern Korean singer. This song is about romance he experienced in Daegu. 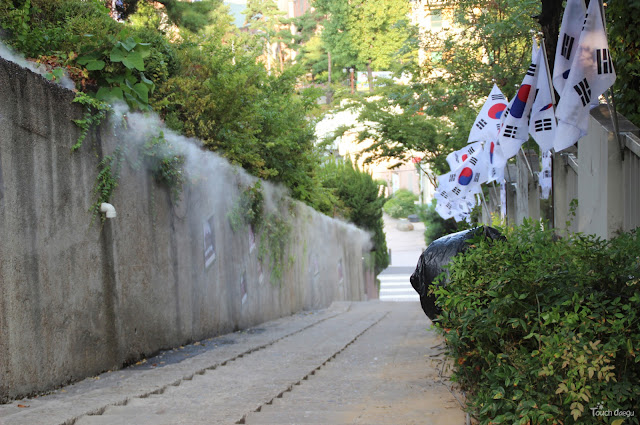 In the past, there was the colonial period in Korea.

On March, 1919 there were the independence movement in almost every Korea. Of course, on March 8, Daegu had the same movement, which was most people participated in. You can check the pictures of the movements. Please start from the top of the steps. 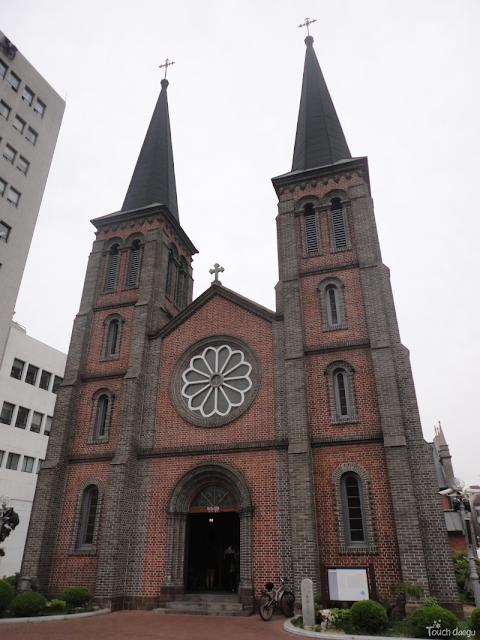 Attention to this church. This was the first traditional Korean building in 1899. In 1901, there was fire on the church so it was corrected the building in 1902. This church is known as twin tower, which is shared with Jeondong Cathedral in Jeonju.

In most church, there are many stained glasses, with bible’s stories. In Gyesan, people in the glass wore Hanbok, Korean traditional clothes.

As it is so beautiful, this place is also popular for wedding these days. 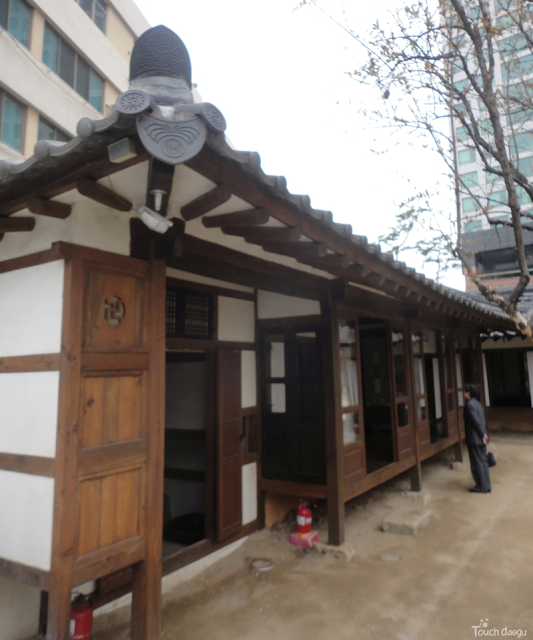 Gyesanyega is a modern exhibition center located between Lee Sang-hwa and Seo Sang-don houses. There is a screen room showing a video about these artists. This building is the Hanok, Korean Traditional House so you might experience this. 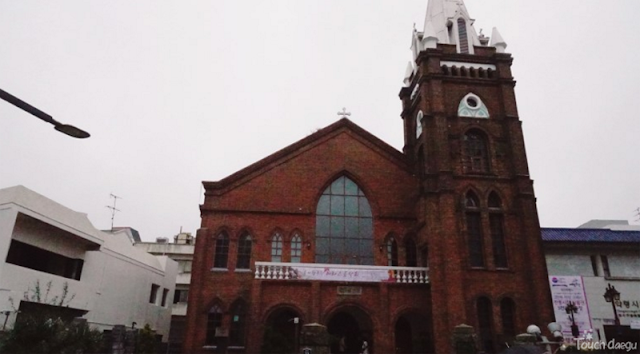 Jeil Church was the first Christian’s church in Daegu, Gyeongbuk province established in 1893. At first, it began in a small tile-roofed house. Since many people gathered, the church became bigger and bigger. In 1937, the bell tower was built in 1937 and completed as the current shapes. From 1994, as the new church was built, this place became a mission.
You can go inside on Saturday and Sunday. 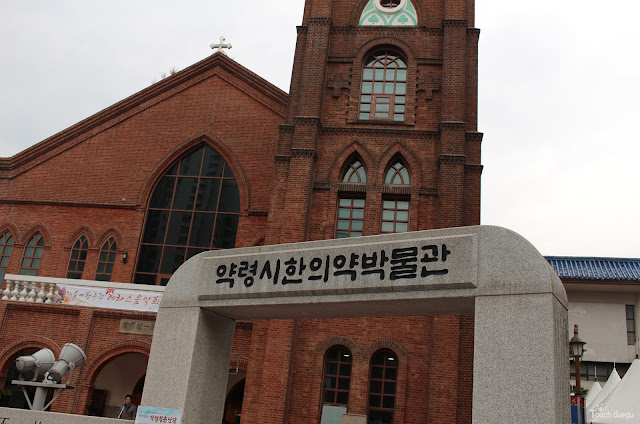 In here, you might smell strange smell. Don’t worry, it just smells of the oriental herbs. As many people already know that Oriental Medicine is also helpful and makes you healthy. There are several activities, so do not miss it. 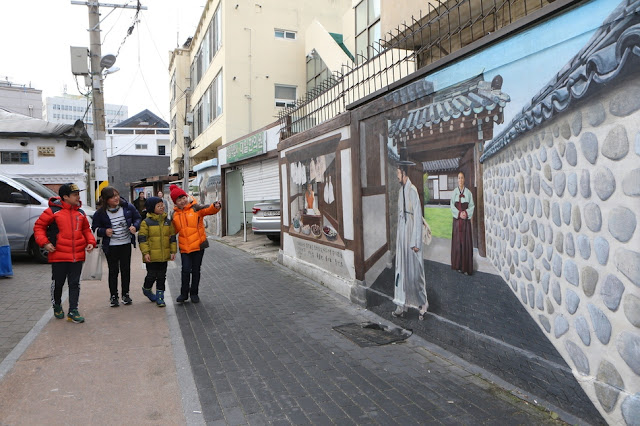 Some people could recognize that there is something behind Hyundai Department Store.
It is Yeongnam-daero.

It is one of the 9 major roads in the Joseon Dynasty, connecting Busan and Hanyang(Seoul). It is famous as the road which is used by scholars of Yeongnam. They used this road to take examination to Hanyang(Seoul).

Please check many paintings related to this road.

Jongno(종로) means a street with a belfry. It was a center of Daegu since Joseon Dynasty. Since there were so many businesses in this street, it was always crowded by many people. These days, you can see various restaurants in here.

Jin Alley(진골목) is Jingolmok(진골목) in Korean. What does this mean? ‘Jilda(질다)’(this was the same as ‘Gilda,길다’) means ‘it’s long.’ So, it is a long alley. The reason this alley called as long alley, is because many powerful people lived in this area, such as Korean businesses’ founders. Now the houses are being used as Chinese Residents Association, Jeong Pediatrics and a restaurant.


Real Explorers! Are you ready to travel to Daegu Modern Culture Alley Tour? 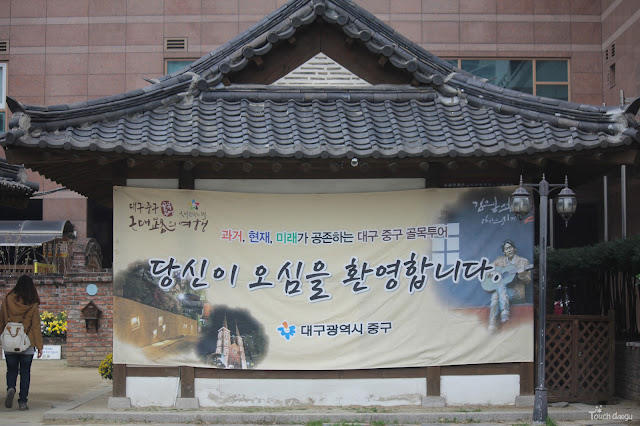