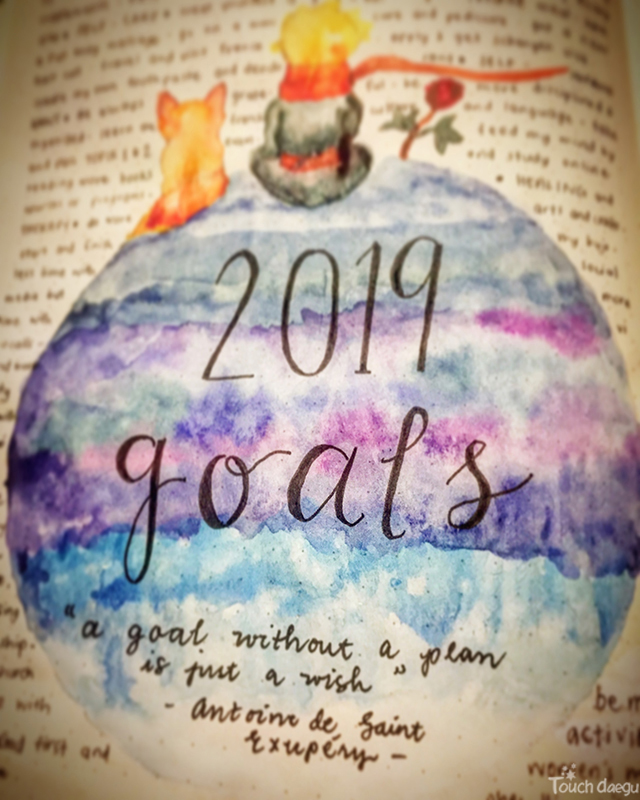 Every January 1 of the New Year is an opportunity for New Promises to Self for fresh Opportunities & beneficial Improvement! Let Daegu facilitate these goals! Beautiful watercolor is by fellow Colorful Daegu Citizen Reporter Paula Mercado.

1. ADVENTURE: See a Sunrise on a Mountain 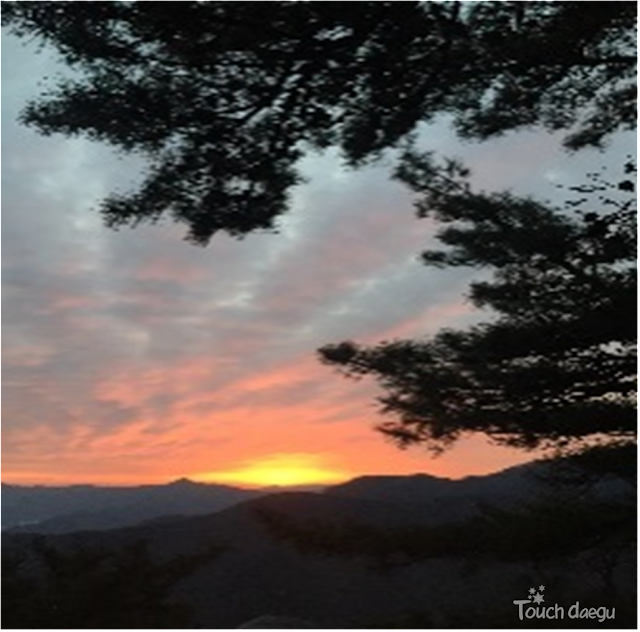 Watching a sunrise on the beach is a romantic and soul-soothing practice for many couples or solo individuals in the USA. In Daegu, I have learned that climbing a mountain-top well before dawn to watch a sunrise with a crowd of people can be fun too! 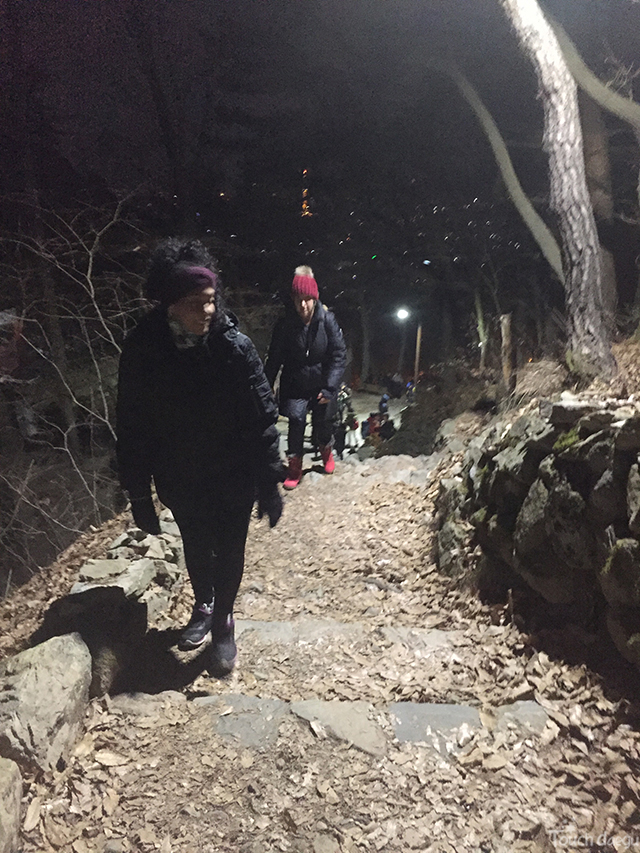 Safety is always a concern when someone mentions night hiking. It’s hard enough to ensure stable footing in the light of day! Take a lamppost path…take it slow…one step at a time. 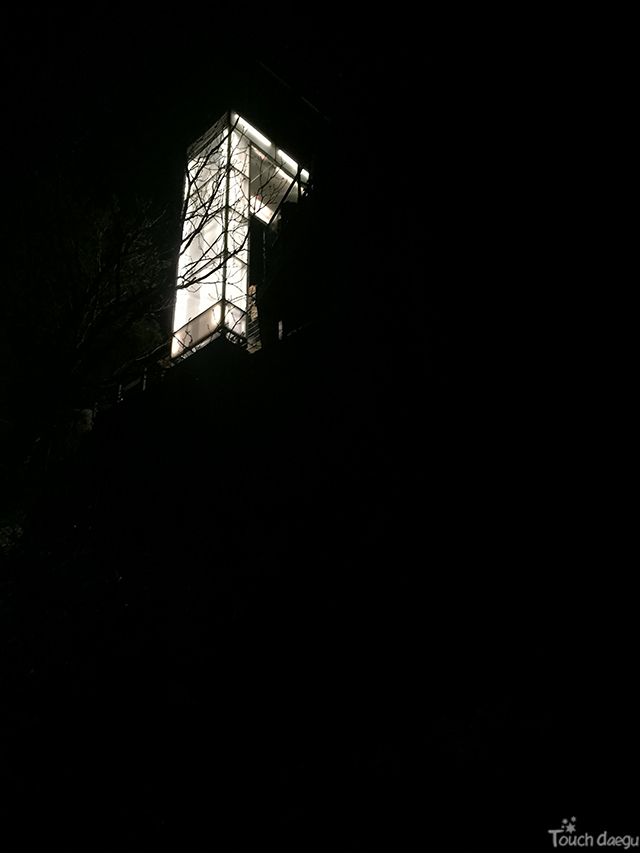 The Observation Deck at the top of Apsan is a beacon of hope indicating your steep ascent is almost finished. 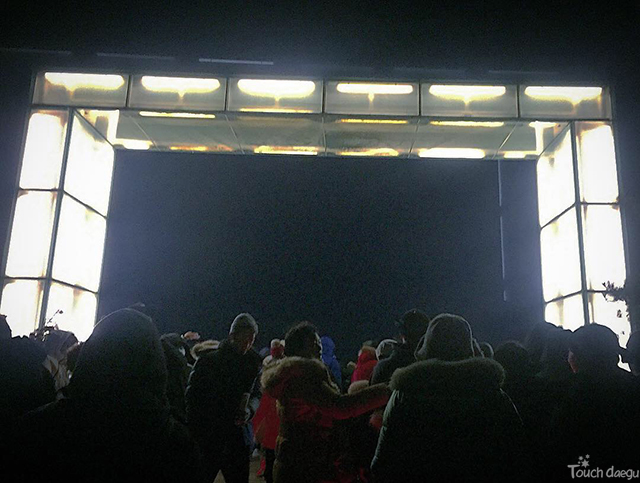 Now we wait. It is on special occasions like New Year’s Day, Lunar New Year’s Day, and during the Chuseok holiday that the Apsan cable car will sometimes run as early as 4 am to ferry up (or down) tourists and locals in time for sunrise (weather dependent). 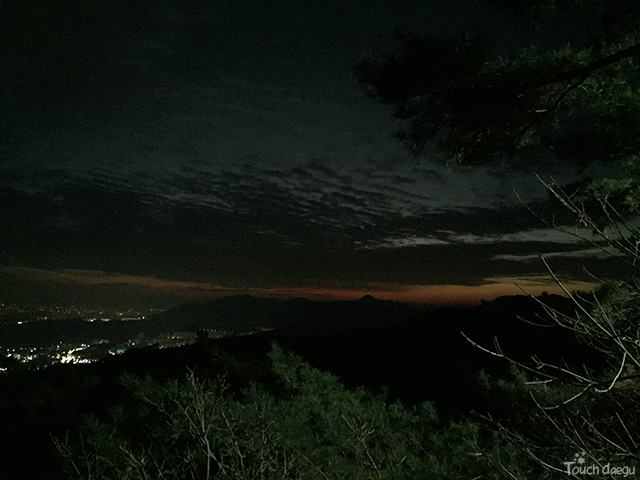 A break in the darkness! 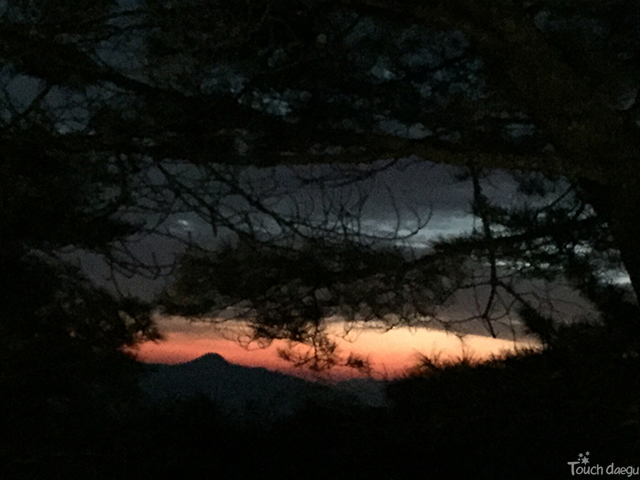 Witnessing the promise of a new day as soon as it happens is truly inspirational. It is not something though that can be done without deliberate planning: to wake up early, to travel to the mountain, and to catch the moment! 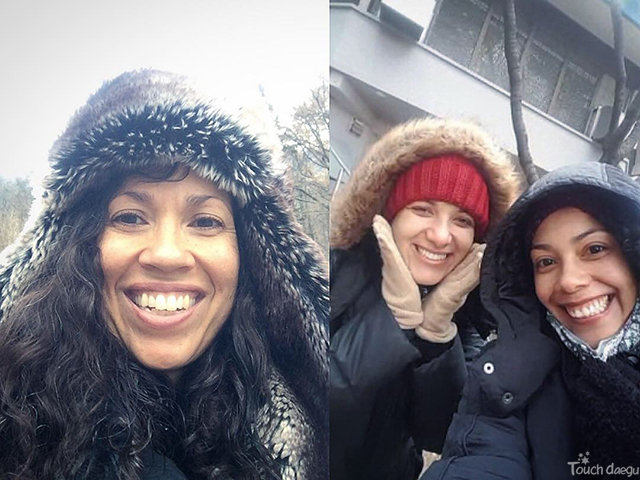 Dress in multiple layers!! Hiking up gets you sweaty, but waiting at the top for the sun can get chilly. The USB powered hand warmers are much better than the sachet disposable ones (the packets simply take too long to activate). Wear hats that cover your ears. Hot tea in a quality thermos boosts morale.

2. CHALLENGE: Do an Escape Room 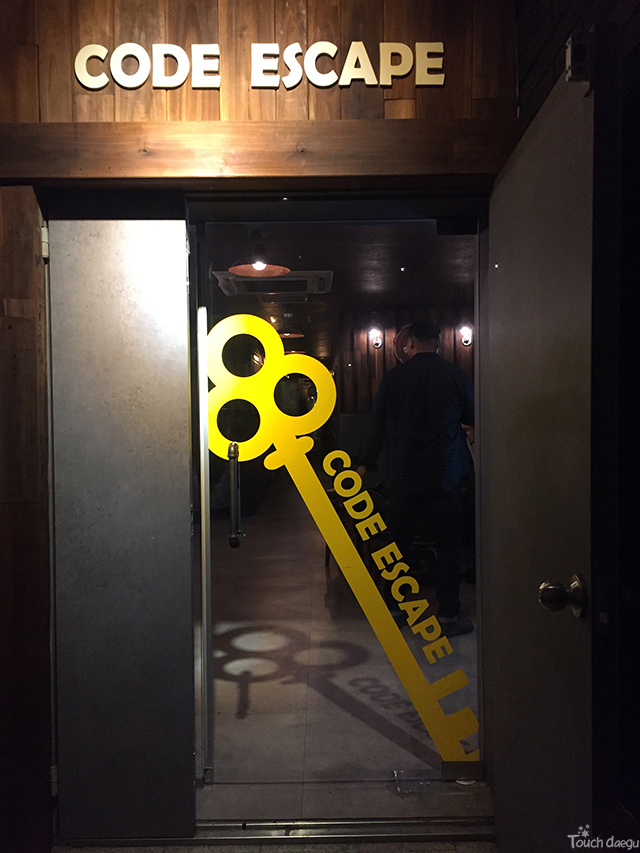 Our favorite escape room suddenly closed at Suseong Lake, so we were thrilled to find another facility offering puzzle rooms to solve. It is best for English speakers to call to reserve a room because only certain rooms can be configured using English only. 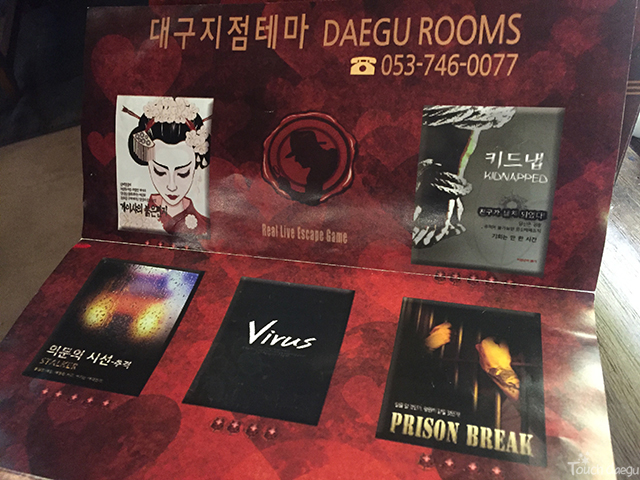 I have personally completed the Prison Break and Virus rooms. Geisha room is confirmed not configurable in English. No worries! Stalker and Kidnapped sound compelling. 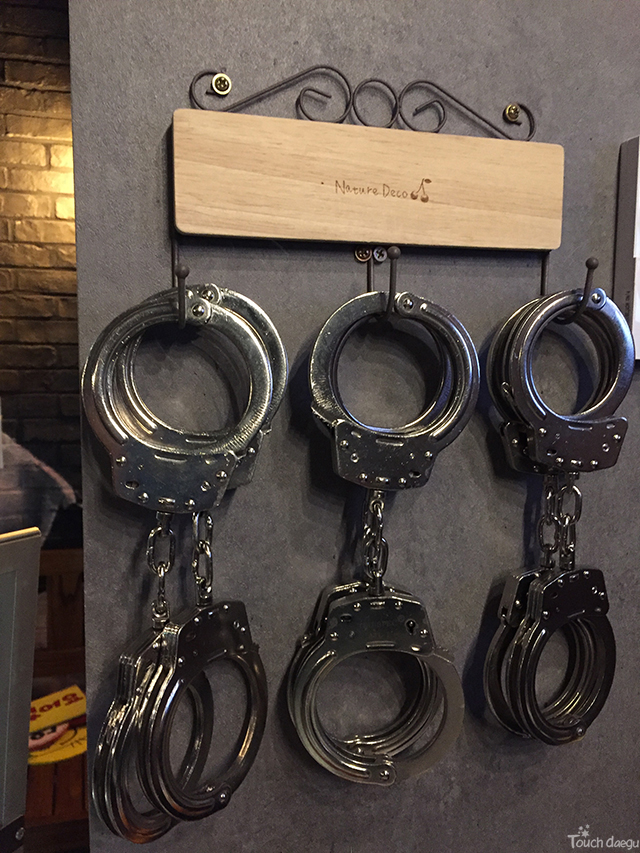 Just like all typical escape rooms, no phones are not allowed (lockers are provided at no extra cost), the rooms tend to be small and windowless, and HINTS can be provided for a time penalty (60-minute limit to solve the room). 2-5 people per room. Maxing out the team will give you the best price (44,000 – 90,000 won per room. When paying, mentioning if it is your first escape room experience with them (often results in a generous discount). 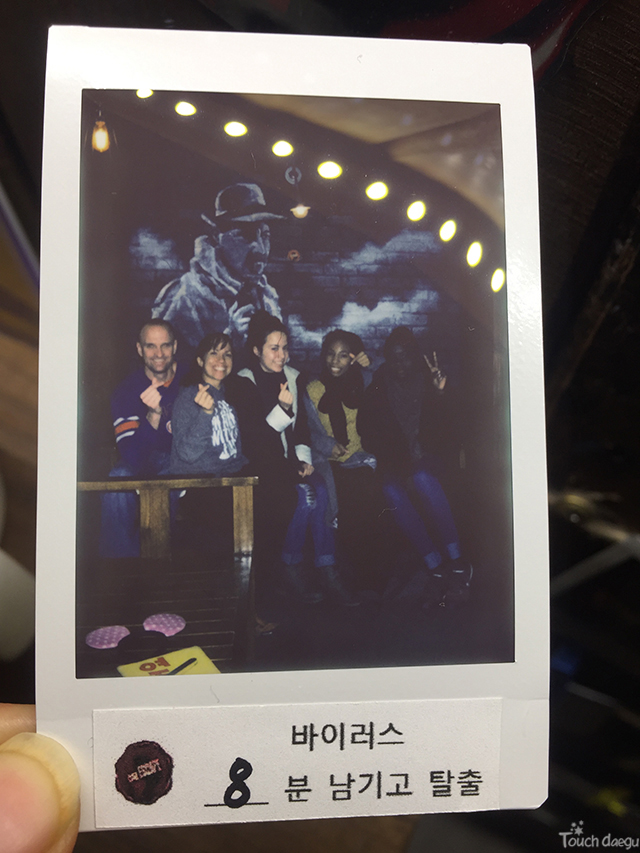 There is a souvenir mini polaroid taken that stays at the facility. Escape Rooms are a great way to exercise your brain and get your heart rate pumping without being in any real danger! 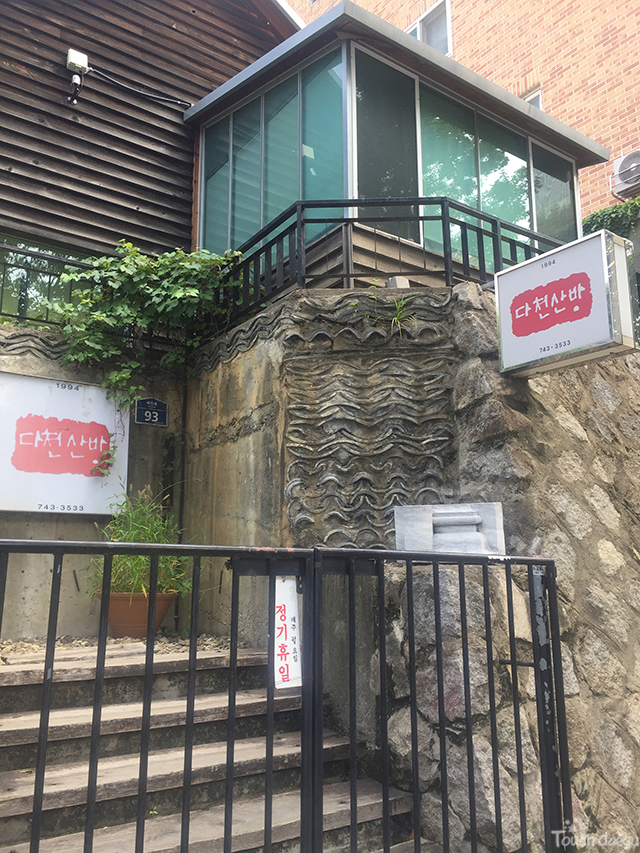 Teas are available at most cafés, but there are additional spiritual benefits to unplugging from the branded fast paced atmosphere of quick caffeine and reconnecting into timeless traditions, the roots of a culture, and experiencing unsurpassable depth flavors. 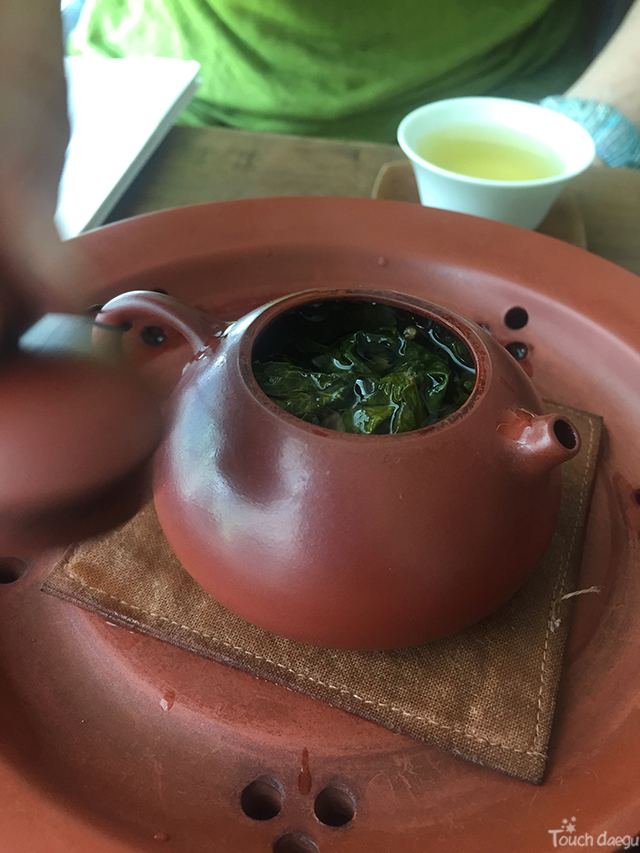 The Tea House owners do not demonstrate or teach the etiquette portion of traditional tea ceremonies, but they do provide all that is needed so you could invite a Korean friend to show you something special! There are no tea bags here. Have a free schedule so that you may relax and enjoy the process. 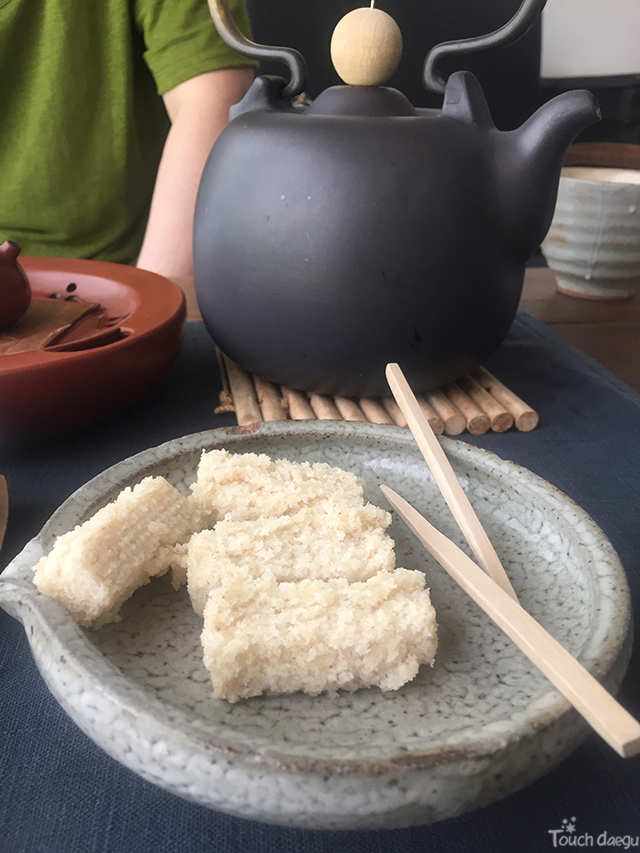 There are many rice cakes offered throughout Daegu, but THESE were my favorite. With the texture of wheat bread, I savored every sip of tea and every bite of rice cake. 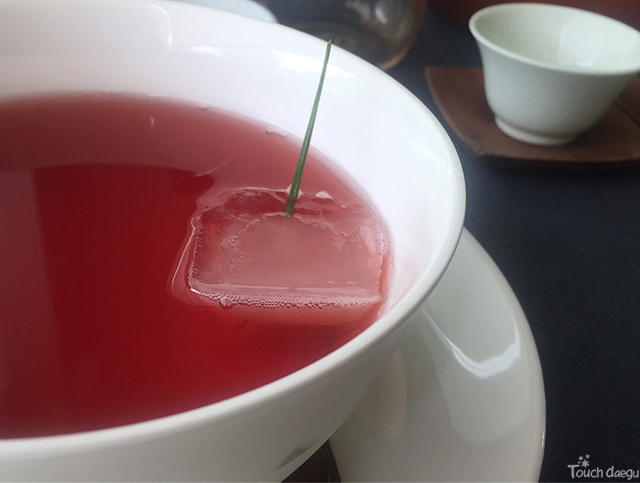 This cold berry tea will be ready to drink by the time the ice cube is completely melted. Until then, the other tea in the course will have a first, second, and third “steeping” of the same batch of tea leaves. And each “steep” tastes different! 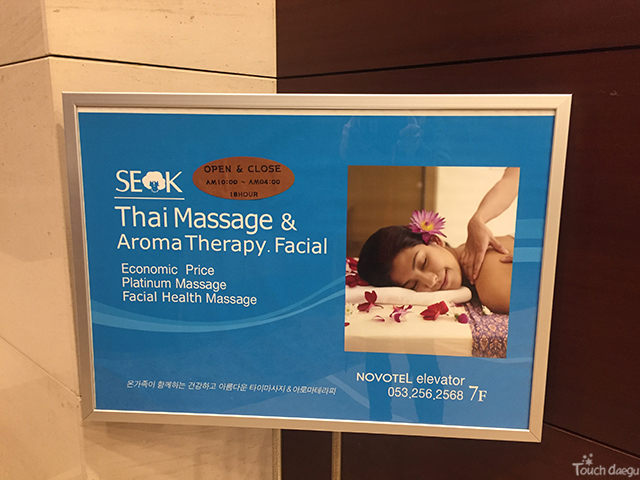 There are many massage options in Daegu. Select one where you feel comfortable and safe in the surroundings, and especially where you can communicate your pain thresholds clearly. 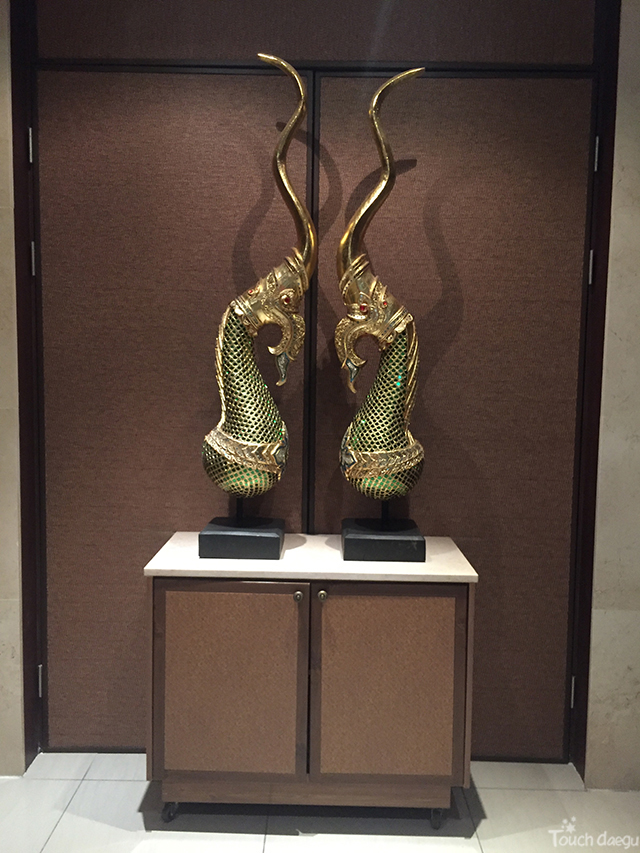 It is okay to splurge on luxury occasionally if the budget allows. It could be a mini-vacation moment without having to leave the city. 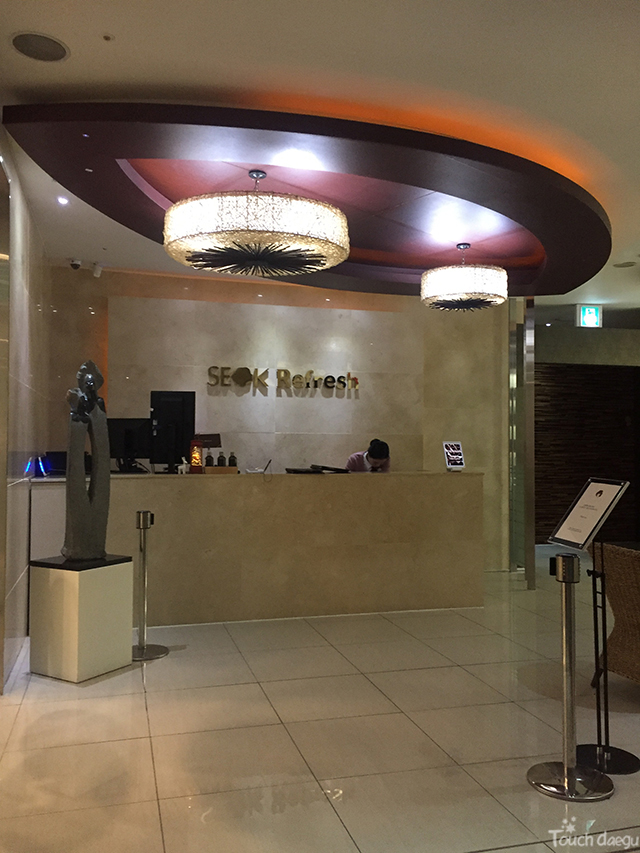 The benefits of massage are the obvious relief of muscle tensions caused by stress and/or intense physical activities, a mental & physical break from the day, and even stimulating blood circulation. Some Spa services can be purchased ala carte, but the SET OPTIONS always seem to fill the 60 to 90-minute time slots with a complete pampering experience! Prices vary. 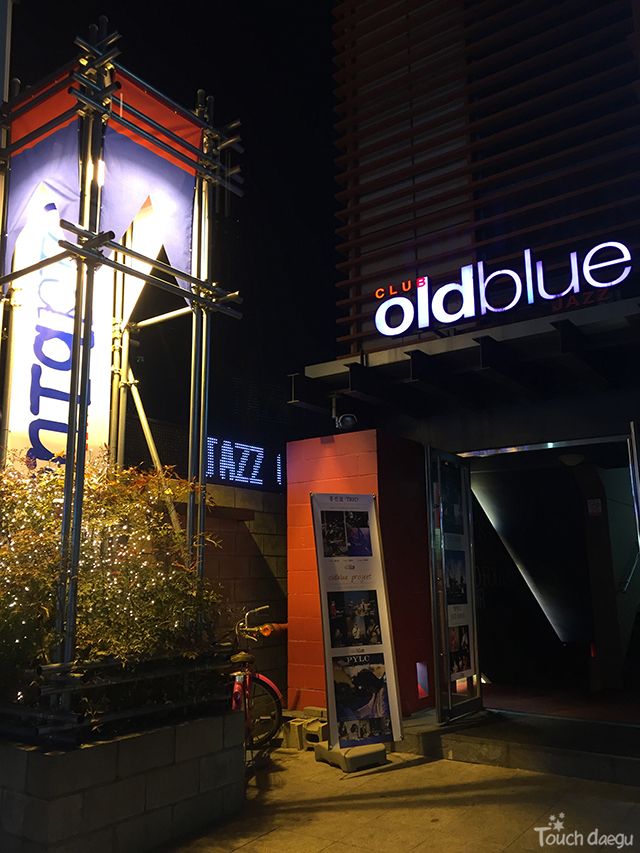 I had no idea American Jazz could be found in Daegu without attending a special exhibition at a concert hall. 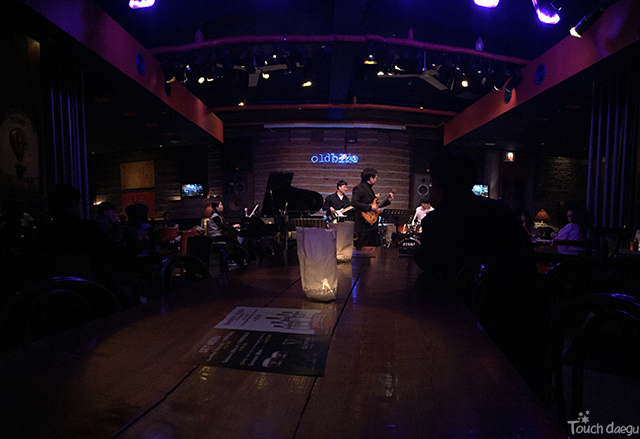 Local venue websites will have calendar of upcoming live performance. Pick a genre you prefer. 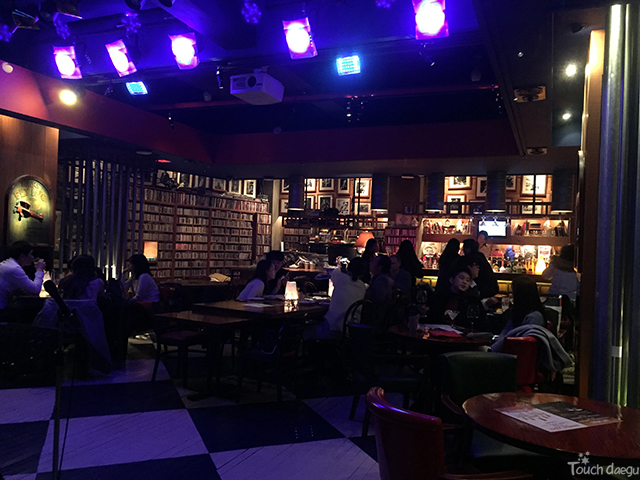 Expect a cover charge during the live performance hour (varies), but this keeps the venue from getting too crowded! Peruse the drink menu, soak in the chill vibe, and enjoy the show. 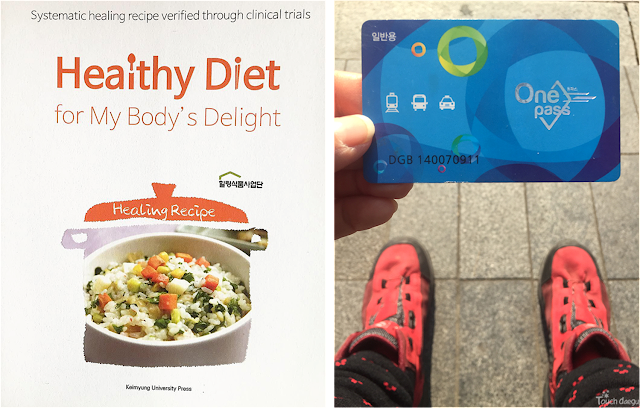 You don’t need to make official RESOLUTIONS to have adventures, be challenged, improve your health, relax, or explore! But they sure give you excellent goals and good ideas! I definitely want to READ MORE, EAT HEALTHY, and continue to LEARN about Daegu. Whatever your plans for 2019, REMEMBER TO HAVE FUN! Happy New Year!

The story of my unforgettable second home 'Daegu'


The story of my unforgettable second home, Daegu 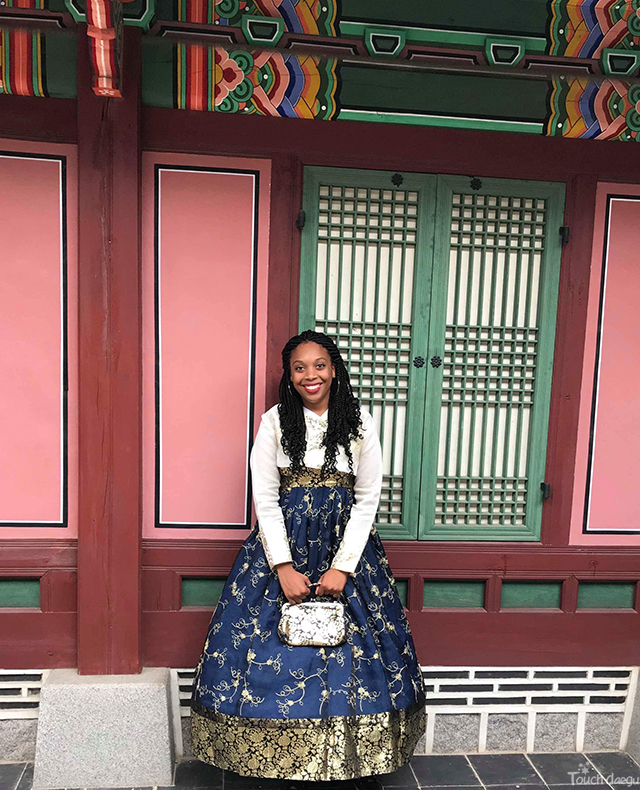 My time living in Daegu has finally come to an end.  I have so many mixed feelings. Daegu has become a second home to me and I never expected to come here and fall so in love with the city.  I had dreamed of living abroad, however when I was offered a position as an English teacher in Daegu I was a little hesitant in the beginning.  From what I read online, people said Daegu was blazing hot in the summertime (they weren’t lying) and that Seoul or Busan would be a much better place to live.  Still, I took a chance and ended up in a place that would change me forever.  I have been looking back on all my experiences I had living in Daegu and what it taught me about life.  I want to share some of my thoughts. 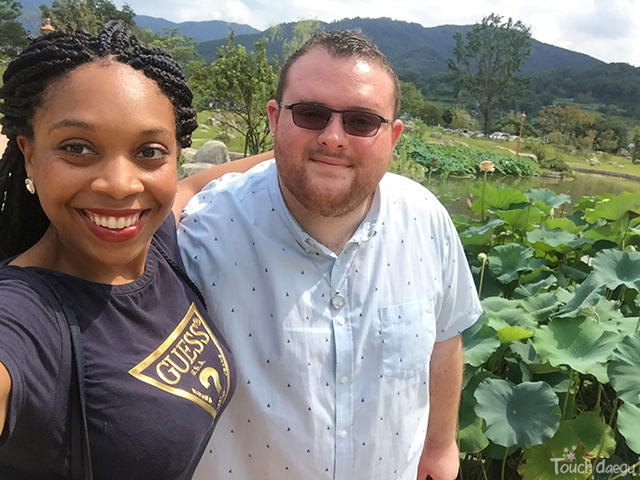 I am a 175cm, African American girl with long braids so I most definitely stood out in Daegu.  People would stare at me almost everywhere I went and it made me really uncomfortable when I first moved there, however I soon learned no one was trying to be mean, they were just curious.  I would constantly have people come up to me and touch my braids saying “yeppeuda” which means beautiful in Korean and ask questions about my hair.  One of my students would rub my brown arms while smiling to see if she could rub some of the color off me.  While I wouldn’t tell other foreigners they have to tolerate random people running their hands through their hair and skin, I didn’t mind it personally.  I learned to embrace having people want to learn more about me and received them with kindness. 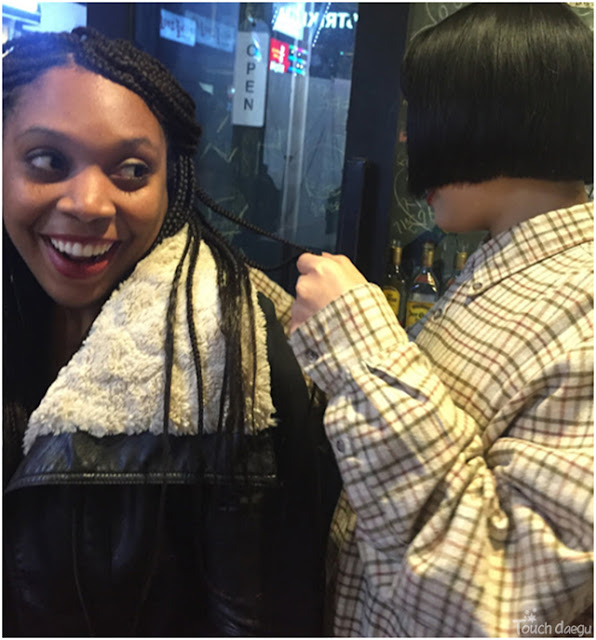 South Korean people are some of the kindest people on the planet.  I was a little nervous being a foreigner in a country where most people living there come from the same nationality.  Overall the natives treated me so kindly.  Walking down the streets, strangers would say hello with big grins on their faces.  Sometimes, people would just come to me and start a conservation. A few of these individuals even offered me candy and snacks, and of course I couldn’t refuse that offer!   Most people were extremely helpful.  I often didn’t even need to directly ask anyone for help if I was lost or needed assistance. If I was standing somewhere looking confused or making a mistake, people would just come over and offer to help me out.  Some of these people didn’t even know English but they would still try and assist me.  One time when my friend and I went to Otogol Hanok Village which is located in the mountains, we did not have a way of getting back down the mountain. Like heaven sent angels, an older couple told us to get in their car and gave us a ride to the subway station.  Most people I meet were extremely patient with me with my limited level of Korean and never made me feel stupid for not being able to communicate with them properly. I will never forget the kindness the locals showed me while I was living in Daegu and I will try to be kind and patient with travelers and people who do not speak English fluently back in America.

Living abroad taught me how to make new friends.  I went through a period where I didn’t have any friends and I was extremely sad and lonely.  I’m normally shy when it comes to meeting new people, but I had to learn how to overcome this trait to make new friends. Eventually, the effort paid off and I managed to make a circle of friends who helped me navigate through the ups and downs of my new life in Korea.  My tip to anyone who is in a similar situation that I was in is to not be afraid to strike up a conversation anywhere.  I meet two of my friends just by talking to them while on the subway.  It was great to finally meet so many new people, but best of all, I meet one of my new best friends Jimin.  She is my travel partner, translator, and ray of sunshine, my life in Daegu would not have been the same without her. 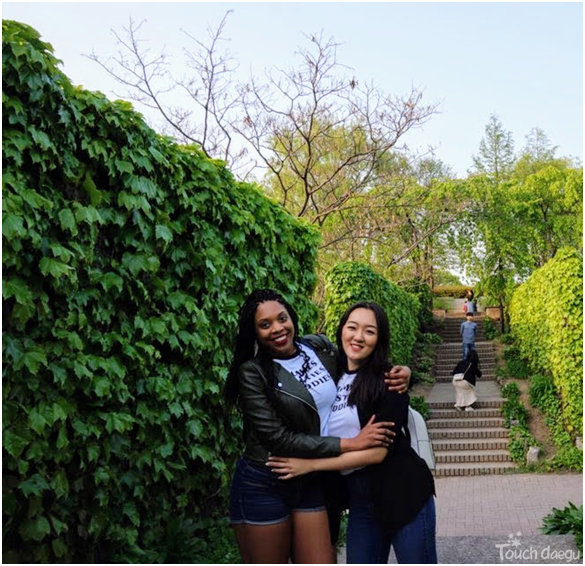 I also picked up a few new hobbies living in Daegu.  Since Daegu is surrounded by mountains I started hiking.  I’m a New York City girl, so hiking through Times Square was more of my thing than hiking up mountains, but my friend convinced me to hike Apsan Mountain with her and I enjoyed the challenge… even though my legs hurt for days afterwards.  I would say that I am still at a beginner’s level when it comes to hiking, but it's something I have come to enjoy. Upon my final journey, I had the courage to hike the tallest mountain in Korea, Mount Halla on Jeju Island! 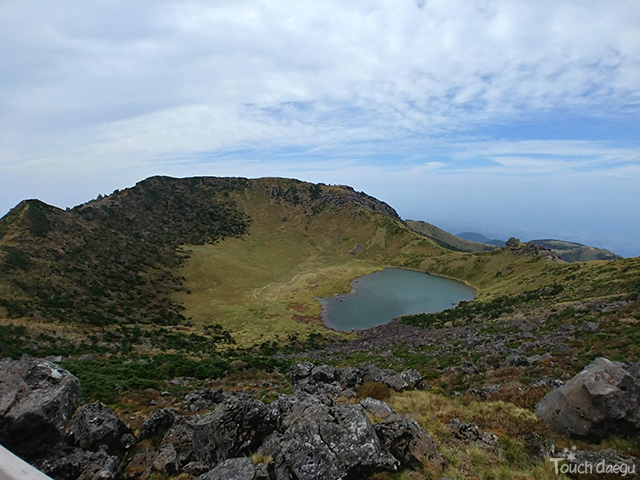 I also took free cooking classes at the YMCA to learn how to prepare Korean food.  I've been impressing all my friends and family with my newfound cooking skills since coming home. 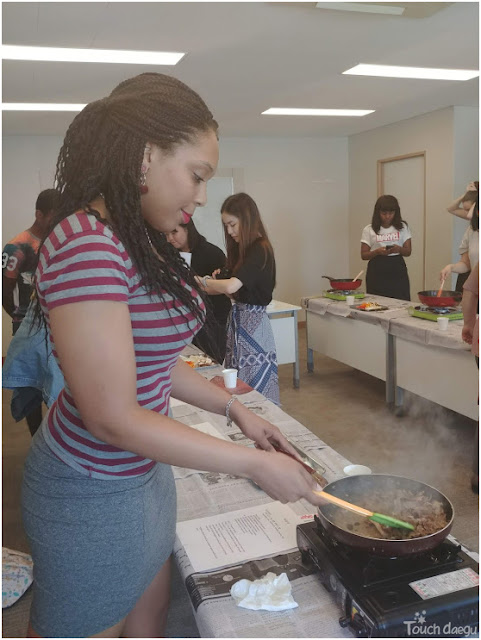 So if anyone would ask me if I think they should move to Korea I would say YES, and if they wanted to move to Daegu I would say, SUPER YES! It has been such an honor serving as Citizen Reporter and I am grateful for all the opportunities this role has given me. Thank you Daegu for showing me an absolutely wonderful time.