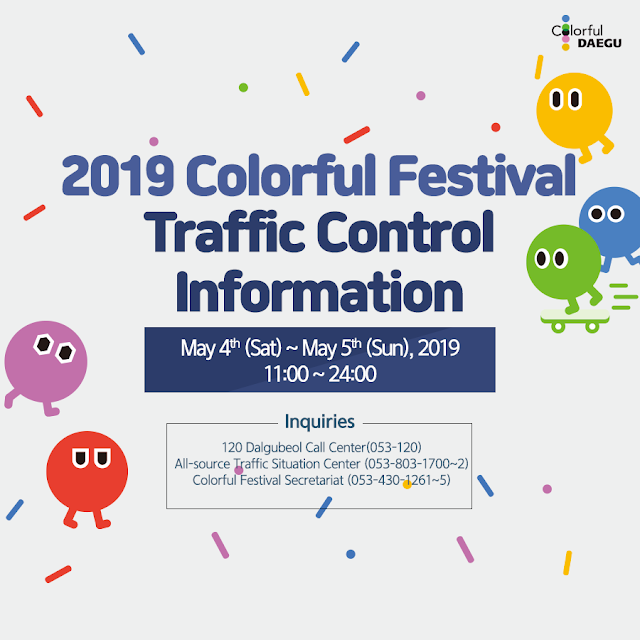 Daegu Metropolitan Government will implement ‘Special Traffic Measures’ during the festival period for the convenience of domestic and overseas visitors who come to Daegu to enjoy the festival.
The following are the details on these traffic control measures implemented to minimize citizens’ inconvenience~ 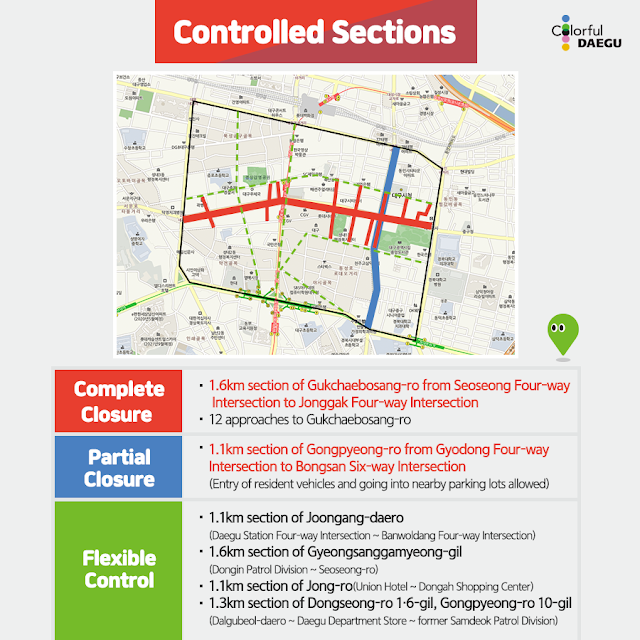 During the festival period, voluntary cooperation of the citizens is crucial in avoiding traffic jams! Please lend a hand in making a successful festival by 'refraining from using private vehicles and using public transportation!’

Daegu Metropolitan City has produced one million leaflets, 270 banners and 223 standing banners with information on traffic control and had them installed or attached at apartments, public facilities with large floating population, city buses and taxis to inform citizens.

Daegu Metropolitan City will designate three-level traffic management areas during the festival, which are 1) control line, 2) proximate detour line and 3) wide detour line to prevent traffic concentration and congestion, so we ask for your kind support! 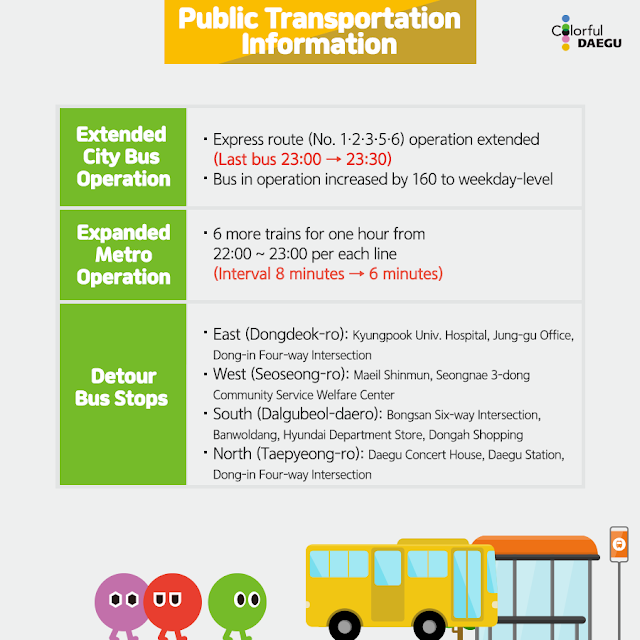 And 786 traffic guides composed of volunteering public servants, police officers and exemplary drivers will be deployed to major control spots on the date of the festival to manage traffic and inform drivers of traffic control~!

To encourage use of public transportation during the festival, Daegu Metropolitan City will maintain the number of city buses to weekday level (160 extra buses).

Also, for convenient return of citizens after the festival, operation of five express bus routes will be extended with 31 additional buses (last bus 11 pm → 11.30 pm), and metro operation will be extended for one hour from 22.00 to 23.00, during which four additional trains will be deployed per each line and interval will be reduced from 10 minutes to 7 minutes. 35 safety officers will be deployed to stations near the festival venue to guarantee safety and convenience!

Also, information on traffic control will be provided through navigation programs to restrict route guidance to controlled roads with the help of five #navigation service providers such as #TMap or #KakaoNavi~ Notices stating changes to bus stops, bus stop closures and platform integrations were posted on city buses, so if you need to travel around the venue during festival time, make sure to check the posters!

Daegu Metropolitan City will provide information on traffic control and parking lots near metro stations (20 parking lots with 4,903 slots at Chilseong Market Station, etc.) with banners & electronic signboards on highway interchanges to minimize traffic inconvenience of visitors from other regions and citizens to whom use of private vehicle is necessary and encourage use of public transportation.

In addition, 8 street vendor squad vehicles, 2 tow trucks and street vendor squads will be deployed around the venue to prevent any congestion from illegal street vendors, and traffic situation center will be operated and traffic control officers will communicate through radio and instant messenger applications to share real-time traffic information and respond accordingly.

As the 2019 Colorful Daegu Festival takes place during May holiday season, more domestic and overseas visitors are expected to visit and enjoy the festival compared to last year.

Daegu Metropolitan City will exert utmost efforts regarding traffic control and safety for convenient and safe trip of visitors! Please make sure to check out the details of the special traffic measures and avoid any inconveniences at the date of the festival.

I’m sure everyone already knows that the key to successful festival is the active support and cooperation of the citizens. Let’s make an even more enjoyable festival together. ٩(๑ˆOˆ๑)۶♡