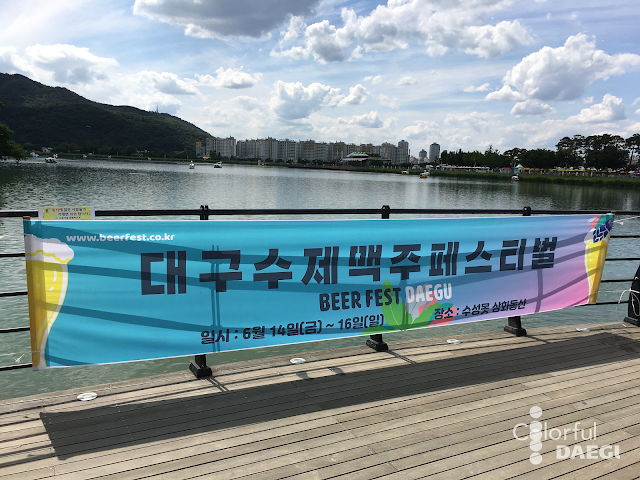 For the second year in a row, the city of Daegu held a craft beer festival at the Suseong Lake.  Last year I was on vacation in America and was not able to attend the festival, so when I found out that it was going to be held again I was really excited to have the chance to visit and explore what it would be like. As a general rule, craft beer is not as popular in Daegu as it is in Seoul and in Busan, so for craft beer lovers like me, that often means traveling to other cities to attend events, such as the BEXCO craft beer festival in Busan and the Osan craft beer festival.  Fortunately, Daegu now has two new craft breweries within walking distance of each other, The Daedo Brewing Company and the Felicette Brewing Company both located on Kim Kwang-Seok street between the yellow and green metro lines. Having an annual craft beer festival in Daegu is another sign that the popularity of Daegu craft beer is increasing. 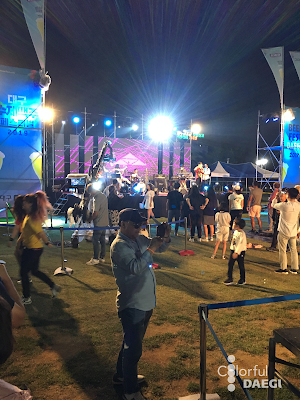 I was curious to see how busy the festival would be, and what kind of people would be attending. Craft beer is most popular with foreigners, so I was pleasantly surprised to see that the festival was quite full with a majority of the attendees being Koreans. There was live music every night of the festival, featuring rock bands singing songs in both English and Korean, so even if you weren’t there for the beer, it was a fun and lively atmosphere to be around.  For people interested in trying beers made in Korea, there were plenty of breweries from all over Korea selling their beer here.

Felicette Brewery sold a delicious French-style beer using hibiscus flowers, while other beers unique to Korea included a yuja pale ale from Whasoo brewery in Ulsan and a Haribo gummy bear inspired beer from Gorilla Brewing in Busan.  Most of the beers ranged in cost from 5,000 won to 8,000 won🍺, and there was a variety of different foods available to pair with the beers, ranging from prosciutto ham served with sliced fruit to the ever-present and always delicious fried chicken.🍗 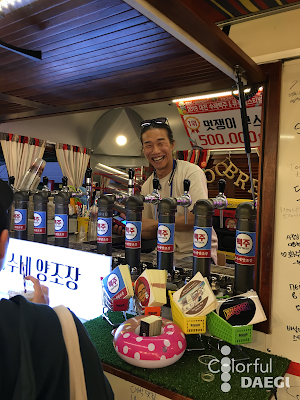 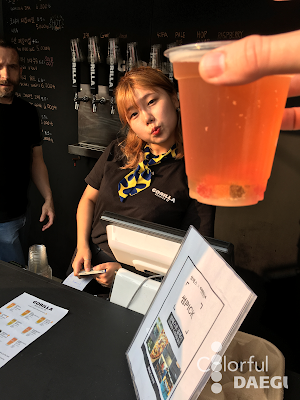 The weather this year was perfect, so I ended up attending the festival for two of the three days. On Friday night, I arrived just as the sun was setting, and the festival was hopping.  The musicians on stage were getting into their groove, while there were lines at all of the food trucks and beer stations. One of the coolest things about visiting a beer festival is that you are often being served the beer by the brewers and brewery owners who helped to make the beer you are consuming.  If you have questions about the beer’s ingredients, how it was made, or what is unique about the beer, there is no better way to find out than to ask the servers who are serving you their beer.😆 They want you to enjoy the beer that you buy, so they are happy to guide you towards a beer that matches your preferences. They have small sampling cups available if you are curious about a beer but are unsure whether or not to commit to a full pour of a beer. 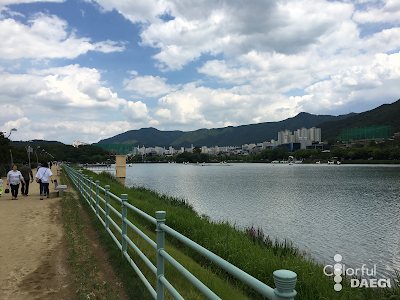 I returned again on Sunday earlier in the day for a picnic by the lake as a way to celebrate Father’s day. We brought some kimbab from our favorite kimbab shop, packed some fruit and snacks, and headed for the lake. The weather was beautiful and we decided to take a walk around the lake (it’s about one mile in circumference), and on a lark decided to take a trip on the duck boats. It was a fun way to see the lake from a different angle, and my daughters enjoy cruising around the lake while their parents are working furiously to turn the pedals to propel the boat forward. It costs 18,000 won for a group of four people to rent a boat for half an hour, or 15,000 to rent a boat just for two people if you are out on a date. 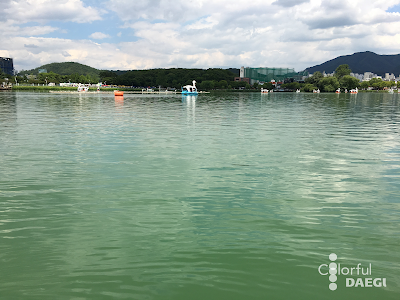 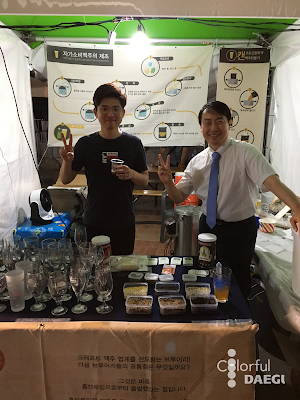 After our boating adventure we finished walking around the lake and proceeded to check out the festival during the daytime. There were several young families present, and soon my daughters found some friends to play with. I joined my group of friends who are members of the Korean Homebrewers Society, also known as the Maekmandong, a place for people who like to make their own beer at home or at a brewing academy with friends. This is a hobby I took up over ten years ago and have found a lot of joy and fulfillment learning this new skill. It can be a great way to express yourself creatively, as well as a way to meet a lot of like-minded people who are happy to share their passion with others. This group meets on a monthly basis, and is a very welcoming group if you are even a tiny bit curious about what brewing beer at home looks like.
You can contact me if you are interested in further information about brewing beer and the group (Jared Hatch: hatchjp@gmail.com).

We spent the afternoon trying a few different styles of beers, and by the end of the afternoon the live music had started up again.  The musicians played a lot of popular cover songs in both Korean and English, and I enjoyed singing “Sweet Caroline” with my Korean friend who happens to be a Boston Red Sox fan.  As the sun started to set it was time to get my family home, and although we were all tired, everyone had a great day. 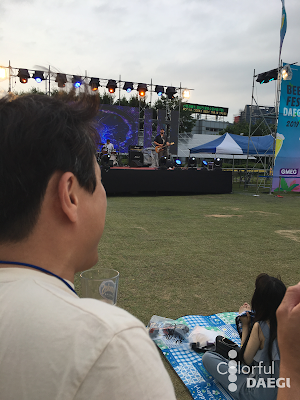 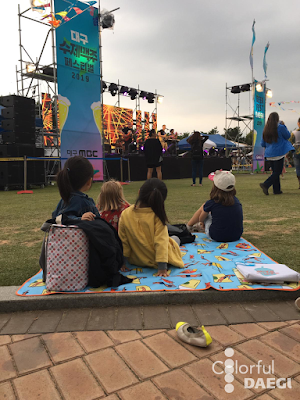 Getting to Suseong lake is quite easy by public transportation. The number three line (also known as the yellow line or monorail) has a stop called 'SuseongMot', which requires about a five minute walk South across a large intersection to get to the lake.
The 403, 410 , 449, and 564 bus all have a stop at the north section of the lake, and require only a short walk to get to the lake. There are parking spots available around the lake, but you do have to be slightly adventurous to find one.
The lake is always open to the public for exercise and enjoyment, but unfortunately the beer festival only happens once a year, so you need to mark your calendars for next June if you want to experience this great event.

😊If you are interested in attending a different beer festival, look for the Chimac Festival celebrating the marvelous pairing of chicken and beer. This festival takes place on from July 19 until July 21 at Duryu Park.🍗🍺