Hello, citizens of Daegu!
Did you know that the year 2020 is ‘Daegu·Gyeongbuk Tourist Year?’
To commemorate the Tourist year, famous tourist attractions of Daegu will be aired globally with the help of overseas influencers!
Let’s have a look! 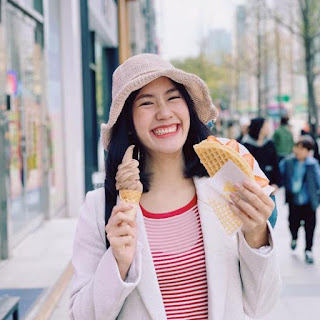 To let the world know the hidden charms of Daegu following the Thailand Tourism Marketing event last May, Daegu Metropolitan City will support production of broadcasting contents on Daegu which will be aired in Thailand to attract more visitors from Thailand and other emerging markets in Southeast Asia!
​
With the concept of a free individual tour, the broadcast is aimed at discovering Daegu tour contents which may attract the interest of Thai people, and will be aired at MCOT Channel 9, a Thai state-run broadcaster!

The clip will be broadcasted on July 29th, a substitute holiday of the day before, at 2~4 p.m. to all over Thailand!

To make the clip look attractive from the perspective of Thai people, ‘MayyR’, a top-tier Thai influencer with more than 1.4 million YouTube subscribers will star in the clip which will focus on themes such as #beauty, #tour, and #daily life!

Furthermore, Daegu Metropolitan City will also support the overseas shooting of 'Prould Mook', a romantic drama which will be aired in the upcoming September at the largest broadcaster in Thailand, in Daegu and Gyeongbuk region!

Once the hidden charms around Daegu are broadcasted in Thai local television, visitors to Daegu from Thailand are expected to increase! 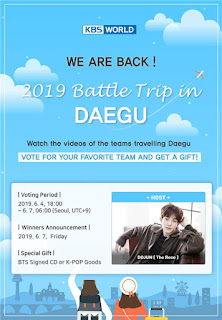 Battle Trip in Daegu
(with 12 Influencers from 6 Countries)

An overseas version of #Thailand, #Russia, #Singapore, #Australia, #Indonesia and #the Philippines, travelling around Daegu to film things to enjoy, see and eat in Daegu and upload them on their social media to share it with the people around the world!

The influencers will make postings on hot places for tourists including #Seomun Market, #Kim Gwang Seok Street, #Guje Alley, #Yangnyeongsi #Museum of Oriental Medicine, #Palgongsan Mountain, #The ARC, #E-World, #Spa Valley and more, under the theme of taste, beauty and elegance of Daegu on their YouTube, Instagram and Facebook, and fans of the Korean Wave all around the world will vote for the winner!
​
#Dojoon, a member of idol boy band ‘The Rose’ will participate in the event as a special host to help let the world spread the charm of Daegu tourism around the world, and to promote participation of Korean Wave fans, special gifts such as the CD with autographs of #BTS will be given to 10 voters!
​
Moreover, the production crew of KBS will produce 20 clips on trip to Daegu and post them on KBS World YouTube channel and internet platform myK as Daegu tour guides for domestic and overseas viewers!
​
The collaboration with overseas influencers is expected to be very effective in letting the world know the charm of Daegu tourism ~ (´ε｀ )♡